Zelensky to US lawmakers: ‘We need you right now’ as he invokes Pearl Harbor and 9/11
Advertisement 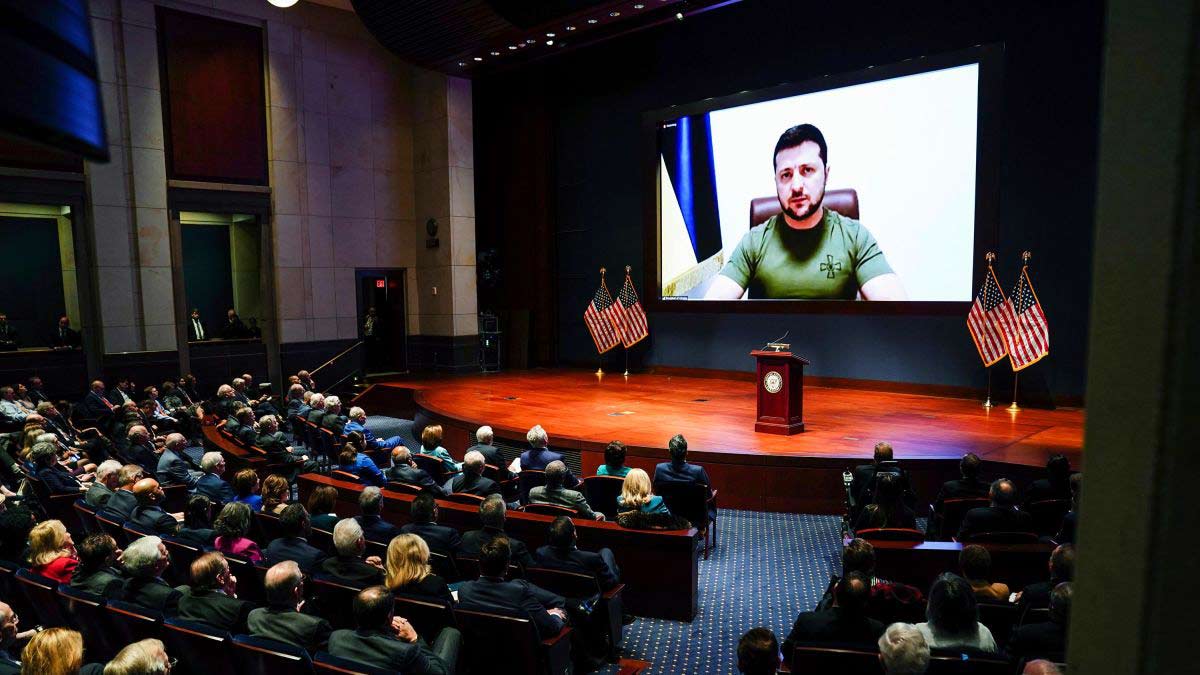 Ukrainian President Volodymyr Zelenskyy delivers a virtual address to Congress at the US Capitol on March 16.

(CNN) Ukrainian President Volodymyr Zelensky appealed to Congress for help on Wednesday in a historic speech, telling US lawmakers “we need you right now” as he invoked tragedies in American history like the attack on Pearl Harbor and the September 11 terrorist attack.
The speech, which was given as a virtual address to members of Congress, came as the United States is under pressure from Ukraine to supply more military assistance to the embattled country as it fights back against Russia’s deadly attack.

Biden later pledged ongoing US aid to Ukraine and announced an additional $800 million in security assistance as he condemned Russia’s attacks in a speech of his own.

“America is leading this effort, together with our allies and partners, providing enormous levels of security and humanitarian assistance that we’re adding to today and we’re going to continue to do more in the days and weeks ahead,” Biden said.

In his address to Congress, the Ukrainian President expressed gratitude to Biden for aid the US has delivered so far, but he argued that more assistance is desperately needed. Zelensky specifically reiterated calls for the US to help enforce a no-fly zone in Ukraine to protect civilians and provide fighter aircraft that the Ukrainians can use to defend themselves, requests that have met with resistance.

The speech featured a short video with harrowing scenes from the war-torn country graphically depicting the brutal and deadly toll of the Russian invasion. At the end, the screen read: “close the sky over Ukraine.”
Zelensky paid tribute to tragic moments in American history as he made his appeal.

“Friends, Americans, in your great history, you have pages that would allow you to understand Ukrainians, understand us now, when we need you right now,” he said through a translator at the start of his speech, though at the end of his remarks, he spoke in English.

“Remember Pearl Harbor, terrible morning of December 7, 1941, when your sky was black from the planes attacking you,” Zelensky said. “Just remember it, remember, September the 11th, a terrible day in 2001 when evil tried to turn US cities into battlefields, when innocent people were attacked from air, just like nobody else expected it and you could not stop it. Our country experiences the same, every day, right now at this moment.”

The speech has sparked renewed debate among lawmakers over what more the US can do to aid the country as it fights back against Russia.
While there is widespread bipartisan support for aid to Ukraine, many US lawmakers also believe the US should be careful not to be drawn into any kind of direct, armed conflict with Russia.

Members on both sides of the aisle praised Zelensky after the speech concluded and many agreed the US has more work to do to ensure the safety of Ukraine, but most stopped short of endorsing the call for a no-fly zone.

A number of Democrats pointed to what the Biden administration has already done to deliver aid. House Speaker Nancy Pelosi called the speech “quite remarkable.”

“(We’re) grateful that he was grateful to United States for all that we have done and what President Biden has done,” she said.
As he left the address, Senate Minority Leader Mitch McConnell called it an “incredibly effective speech” but said “the message to President Biden is that he needs to step up his game.”
In his speech, Zelensky implored lawmakers to do more.

“Russia has turned the Ukrainian sky into a source of death for thousands of people,” he said as he described the use of missiles, bombs and drones by Russian troops to inflict brutal and deadly attacks on his country. “We are asking for a reply to this terror from the whole world.”

“To create a no-fly zone over Ukraine to save people, is this too much to ask?” he said. Zelensky went on to say, “You know how much depends on the battlefield, on the ability to use aircraft, powerful strong aviation to protect our people, our freedom, our land, aircraft that can help Ukraine, help Europe. You know they exist and you have them, but they are on Earth not in the Ukrainian sky.”
“I need to protect our sky,” he said.

Lawmakers of both parties say they are wary of a no-fly zone at this time because they think it could pit the US directly against Russia in the skies over Ukraine.

Republicans have generally been more hawkish about giving Ukraine jets, but some Democrats — and the White House — are concerned Russia could consider such a move an escalation and potentially draw America into war.

There is a push by some lawmakers in Congress to add provisions for providing Ukraine with fighter jets to legislation targeting Russia’s energy imports and trade status, but it is not yet clear what the fate of that effort will be.

The US and its allies have taken a wide range of actions in recent weeks intended to punish Moscow for its invasion, including the rollout of harsh sanctions and export controls and a $350 million security assistance package. In addition, Congress recently passed a $13.6 billion emergency package to supply defensive, humanitarian and economic aid to Ukraine, and the Biden administration announced a $200 million assistance package this past weekend.

As Biden announced an additional $800 million in security assistance for Ukraine on Wednesday, the President outlined a series of anti-aircraft and anti-armor systems, small arms and ammunition, and drones the administration was surging to the region to fend off Russian attacks.
On a no-fly zone, Psaki said Biden “has to look at decisions that are made through the prism of what is in our national security interests and global security interests, and he continues to believe that a no-fly zone would be escalatory, could prompt a war with Russia.”
This story and headline have been updated with additional developments Wednesday.