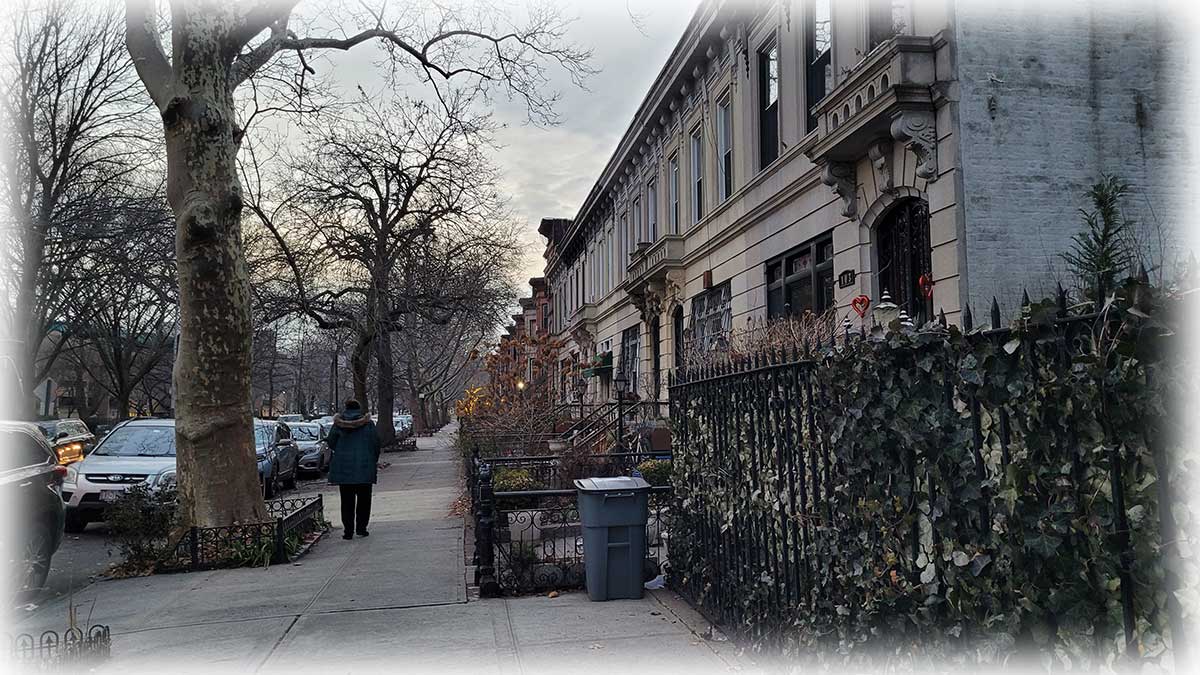 Our Time At Home: Brooklyn & Beyond

After nearly 80 years our home will no longer be our home. Any moment, an offer can come in.
This home, across the street from Fulton Park, has never not been in my life, its arms wrapped around me. Memories present themselves everywhere. I will be seventy-three soon, and each day I practice something almost impossible for me to do; Letting go.
My mother was 7 years old in 1939 when my great-grandfather, her grandfather stood her across the street from the house, in this very spot. He pointed and said, “This is your house.”

Great-Grandfather James Hendy, “Grandpa” as he was called, came to America from Barbados in the 1920s. Once here he worked in a hospital. He lived in The Bronx and Harlem. The ‘A’ train carried him into Brooklyn. By that time my great-grandmother Evelyn Hendy had left Barbados and came to New York through Ellis Island.
I was 8 when Grandpa taught me to ride my blue Schwinn bike in Fulton Park., running behind me, steadying the back wheel. I yelled, “Don’t let me go.” Then, turned around and saw him standing with a smile. He had let me go. I was riding on my own.
Our home was filled with aunts, daughters, cousins, nephews, nieces, grandchildren, and great-grands.
I remember my great-grandfather, grandfather, father, and uncles in fedoras, wing-tipped shoes, and balmacaans, gathered in the living room. Laughter, watching TV, playing cards, and loud talking was the norm. Reading comics from the Daily News with my great-grandparents, while sitting at the parlor floor window, was joy. Mamie, my great-grandmother, used a magnifying glass to read the newspaper. She wore a hearing aid consisting of a transistor with wired ear buds.

During the 1950s to early 60s– kindergarten to eighth grade –Holy Rosary on Bainbridge Street was my school. During recess, in the middle of Bainbridge Street, we played red-light green-light, tag, and jumped rope. I remember a couple of nuns gathering up their skirts and jumping Double Dutch with us.
If you dared, there was a candy shop on Reid Avenue – not yet Malcolm X Blvd – that sold the best candy: wax lips, buttons on paper, shoe strings to name a few. During recess some kids would disappear off the block and into the sweet shop before the nuns noticed.
Tuesdays, after school, I dragged my feet and my book bag around the corner to Stuyvesant Avenue for piano lessons. The teacher kept a ruler at the ready to rap across student’s knuckles for having a not so graceful arch to your wrists and fingers. It was 1961, the year of Breakfast at Tiffany’s, my favorite movie. For me the piano teacher’s biggest crime was not teaching me how to play Moon River. Composers Bach, Czerny, and Chopin were preferred.

Changes made inside the home kept the past and present side-by-side. The downstairs kitchen was once a bedroom with a Castro pull-out bed. My art space was the dining room where my great-grandmother placed her platter of home made coconut candy for after-school treats. The upstairs bathroom once my son’s room when he was a toddler was also a kitchen.

My family lived here through the 60s, 70s, the turbulent 80s, and the 90s.
In September 2002 my husband-to-be and I, with neighbors watching, walked to Mt. Lebanon Church, our church, on Lewis Ave. and we got married there. We had known each other since we were 14 and 15. My husband had on a dashiki, our three-year-old son, who I had at 48, jumped and skipped at my side. Our son would attend Mt. Lebanon until he left for college.
Wonderful neighbors. I won’t name names because I don’t want to forget anyone.
However, there is one person I must name.
Mr. Porter called “the mayor of the block.” He passed some years ago. He had a bench on his porch where he sat and observed the goings on of the block. He knew everyone. He was known for his famous sweet potatoes pies. You could ring his bell day or night and buy one of his pies—the best anywhere. Countless times we rang his bell in the evening to buy one of “Mr. Porter’s pies.”

I loved Mr. Porter for his early morning ritual of walking and delivering papers. It coincided with my leaving for work, struggling with my toddler whose tantrums had him laid out on the sidewalk. Mr. Porter saw him and simply said, in a stern voice, “get up from there.” My son would scramble to his feet. From then on, Mr. Porter timed himself in the morning to pass by just when I was leaving the house.
One house away is my neighbor who attended Holy Rosary School with me. This past Halloween her daughter brought my dog a Halloween costume so Roxy could be ready to greet children who were trick or treating. Another neighbor ‘babysits’ Rocky when we go out. Sometimes she simply likes to have Roxy over for the day.
Hanging up clothes in the back yard, talking over the fence and sharing bits and pieces of on the stoop were good ways to catch up on family and neighborhood news.
Lasting friendships were born with people I met in the local Brownstone Books. No longer here, the bookstore was a beacon of light on Lewis Ave. Every Saturday afternoon was story time. Along with other parents I took my son to story time. Many of the kids since that time have completed college and started their lives. Many cannot afford to purchase houses in the neighborhood where their parents grew up, and their grandparents and great grandparents invested.

I took Roxy for a walk through the park, a few weeks ago during the Christmas holidays. The lampposts were decorated for the holidays, were wrapped in garland and tied with bows the perfect color red. Some of the houses were decorated. I heard light comfortable laughter from a group sitting on the steps of one of the brownstones. In years past, lights would have framed my windows, too. Bows would have dressed my doors.
Last month, I didn’t put up any decorations. It’s my way of saying goodbye to the block, it was also a sign that I was finally letting go.