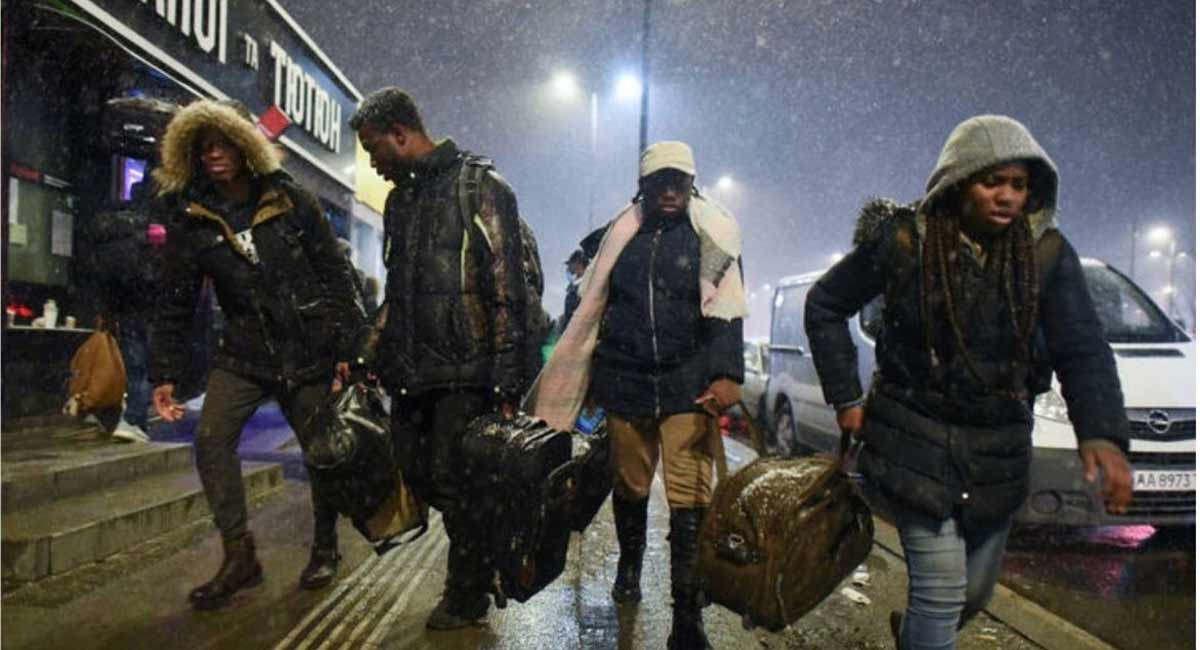 According to the United Nations, Poland has so far received at least 281,000 refugees from Ukraine since Russia invaded on February 24. African residents are seen here joining the throngs leaving for the Polish border. Meanwhile, battles are raging across Ukraine between Ukrainian armed forces and the invading Russian army.

AfroWorldNews
As the Russian invasion of Ukraine continues, African students attempting to leave the country say they are experiencing the worst type of racist treatment by Ukrainian security forces and border officials. Russian, Poland, and Ukraine are famous for their overt racism. In the midst of war, they manage to display their racism in front of the world.

Saakshi Ijantkar, a fourth-year medical student from India, also shared her ordeal with CNN Monday via a phone call from Lviv, western Ukraine.
“There are three checkpoints we need to go through to get to the border. A lot of people are stranded there. They don’t allow Indians to go through.

Claire Moor, another Black student, was pushed down as she tried to board a train at Lviv’s train station. The guard insisted that only women could take the train. The officer looked away, Moor said, as she pointed out that she was, indeed, a woman. “I was shocked because I did not know the extent of the racism,” she added.

The subject of race in general—as it pertains to Slavic society—is discussed openly and honestly in Ukraine, more so than race is discussed in America.  In many instances, the Ukrainians are proud of their racism and wear it as a badge of honor, and they often look up to Racism and white Nationalists in the US to draw their inspiration. So it is not surprising that they are throwing Black women and children off the train in order to create room for their pets.

In response to the Global outcry, many African countries have started the process of assisting their citizens flee the war-torn region.
Nigeria’s government approved $8.5 million (7.65 million euros) to help with the evacuation of around 5,000 citizens, the state ministry of foreign affairs said.

Ukraine’s ambassador to South Africa said this week the country has about 16,000 African students there, but many are from countries with no embassy in Ukraine, complicating the situation.
Nigeria, Africa’s most populous country, has 5,600 students in Ukraine, according to the ministry.

Ghana on Tuesday brought back its first group of 17 out of more than 500 students from Ukraine’s neighboring countries.

Zelensky to US lawmakers: ‘We need you right now’ as he invokes Pearl Harbor and 9/11