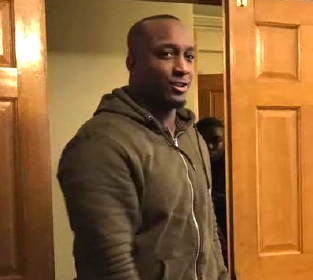 I want to tell you a story about family, about struggle, about the decisions that adults make and the lives that are forever altered as a result. It’s a story about the Black experience, the American experience, the effect of socioeconomics and oppression on the lives of regular folk. It is the story of Glen Jones, of Mark McCoy and how one man finds that living as both is the only thing that makes him whole.
Mark McCoy was born on July 13, 1970 at Kings County Hospital. His mother, Delores McCoy, already had six children and was living in abject poverty in the projects in Brownsville. His father was not at all present. At 40 years old, the pressures of dealing with seven children, having to work and provide for them all and having to care for a baby again must have seemed overwhelming for her. So, she put Mark up for adoption through the Jewish Child Care Center. A family from Queens, the Jones family adopted Mark and gave him the name Glen Jones.
Glen can remember the first time he realized that he was adopted. “I can remember being around 4 or 5 years old and my brother telling me that I was adopted. At that age, you don’t really understand what it means to be adopted. I remember asking my mom if it was true, and she said yes, I was adopted, but that they loved me a great deal.” While Delores raised her older six kids in the Van Dyke housing projects in Brownsville, less than five miles away, Glen Jones, her youngest son, was being raised in a middle-class home in Queens.
Glen Jones lived a good life. As he puts it, “I never wanted for anything. I was able to get whatever I needed, even braces.” He graduated high school, got a job with the MTA and has worked for them for the past 25 years. He doesn’t drink or smoke, works out on a regular basis and has a beautiful wife and four children. Conversely, most of his birth siblings have dealt with the ramifications of growing up in the ghetto. Substance abuse, imprisonment, even death. His oldest sister, Phyllis Ann, was murdered by her husband in 1986. Even though Glen had a decent life, he still yearned to learn more about his biological family.
In his 20’s, he found out that he was adopted through the Jewish Child Care Center. He reached out to them in an attempt to find out information about his birth parents. The center told him that they couldn’t answer any specific questions, but they did tell him that his father was of Caribbean descent, his mother was 40 years old when she had him, and that even though she felt like she couldn’t take care of him, she loved him a great deal and wanted the best for him. Again in 2016, he reached out to them, and again their response was the same. By now, Glen was in his 40’s and figured that he’d never find his biological family. After the last letter from the Jewish Child Care Center, he was ready to give up.

Glen had a child when he was 18–a son. In 2018, that son, a grown man at this point, submitted his DNA to ancestry.com. His mission was to find out more about his lineage, in the hopes that he may be able to help his father find what he was looking for. What happened was something that no one expected. Ancestry.com contacted Glen’s son and told him that his DNA matched another’s on file, and that it was a 90% chance that the person was a close family member. The son called Glen, ecstatic over the news, Glen cried when he realized that his son had accomplished answering the one question that he’s had since he was 4. He found his father’s family. “I just sat there and broke down. I couldn’t believe what he was telling me.” The son reached out to the person on file a couple of times and was unsuccessful in reaching them. Finally, the person responded. Glen’s son connected the two. The person was Ruth Fenner, Glen’s sister. They spoke about timelines and tried to put the pieces all together, but Ruth was only 7 when her baby brother was adopted so she couldn’t answer all of the questions that Glen had. But Ruth did have a big cousin that was around 17 at the time that Glen was put up for adoption. She called that cousin up and for the first time ever Glen heard confirmation from someone that remembers his mother being pregnant and giving the baby up for adoption. That person, Ruth’s first cousin and in fact Glen’s first cousin, was my mother.
Glen Jones, born Mark McCoy, is my first cousin once removed. His mother and my grandmother were sisters. He was put up for adoption after his birth and lived for 48 years before coming to know his family. After her first conversation with him, my mother called me to tell me about everything. I was happy for him, but the story didn’t truly strike a chord with me until I met him this past weekend. He looks like my family. He is the spitting image of his older brother, my cousin Michael. He texts his newfound siblings every day. He said that his adopted brother was concerned as to why Glen felt the need to meet his biological family. Glen told him, “We will always be brothers. We will always be family. But now, I have even more!” As Glen Jones, there was always a piece of him that he felt was missing. Coming to know Mark McCoy’s family has made him whole.

A Letter to the Self Isolated

From Blocks to Bookshelves: One Man’s Passion for Curating Hip-Hop’s Legacy