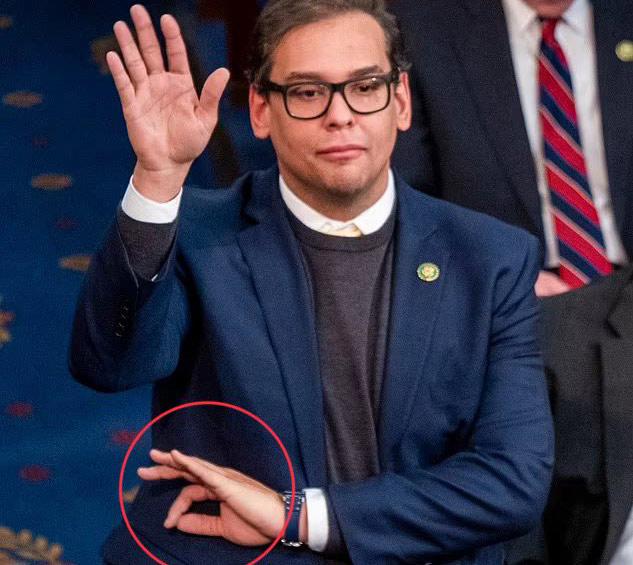 I saw the picture of Congressman George Santos flashing the white power sign while voting in the House Chamber.
The action was blatant and disgusting. It went viral in a matter of minutes, and in a matter of hours, there were posted reactions on Twitter from other members of Congress that witnessed it firsthand. For many of us here in Brooklyn, this was the first time we had heard of George Santos. I mentioned what happened in the House Chamber to a coworker, and she replied, “That’s a shame. In 2023, people from the South are still so racist.” She was only half right. It is 2023. But George Santos isn’t from the South. He is the newly elected Congressman from New York’s 3rd Congressional District, which covers Floral Park, Queens Village, and Nassau County. The racist that had the audacity to expose himself on the floor of the House of Representatives is not a good ole boy cosplaying as a throwback from the Antebellum South. He’s from Queens. And not only is he a racist. He’s also a pathological liar.

George Santos was a political unknown until he ran for this same Congressional Seat in 2020. In that race, he lost to the incumbent Tom Suozzi, a man of high integrity whom I once met at the Labor Day West Indian Parade on Eastern Parkway, of all places. When a reporter asked Tom about this Santos character back then, Tom made it plain that he felt like Santos was a phony. Santos ran again in the 2022 elections, this time facing Democrat Robert Zimmerman because Suozzi had retired from the seat to focus on his campaign for Governor. In a nod to the power of community newspapers, it was The North Shore Leader. This small periodical covers that district, which was the first media outlet to call Santos an outright fraud in October of 2022. Ironically, the paper’s publisher is a staunch Republican who has even run for that same Congressional seat. And, even he said that Santos was so bizarre, so sketchy, and so unprincipled that the paper just could not endorse him for the seat. And yet, even as the Democratic party threw money at the race to ensure a win, Santos defeated Zimmerman by eight percentage points.

After the election cycle, other information began to surface which would confirm the suspicions of The North Shore Leader. First, it was Santos’ resume. His resume said he had worked in high-profile positions with Goldman Sachs and Citigroup. He’s never worked at either firm. His resume stated that he graduated from Baruch College and New York University. He’s never graduated from either school. He lied about his lineage. He said that his mother was Jewish and that his grandmother had fled from Ukraine to Brazil after World War 2. None of that is true. He lied about organizations that he had claimed to create. He lied about not ever being married. Over and over again, this guy has lied about who he is. The truly unnerving part about it is that we are only finding these things out AFTER he takes office. And there’s even more. There are the loans that he made to his campaign that don’t add up. He loaned his campaign $700,000, but he has only reported salaries of no more than $75,000 over the last two years and has had two eviction notices over the past seven years.

Did I mention that he has admitted to lying? Yes, he’s admitted to being dishonest about everything.
And still, this lying fraud of a man sits in the 3rd Congressional District of New York State seat as that District’s Congressman. And he isn’t at all afraid to show the world that he is a White Supremacist.
What does this say about America? Well, it doesn’t say any more than what we have been saying for generations. America was founded from the precept of a certain demographic of people lying, cheating, and stealing their way to power – facts that certain folk want you to forget, which is why they protest against Critical Race Theory. When I look at George Santos, I don’t see a grotesque human being. No. When I look at George Santos, I see an American Story.

Advertisement
Related Topics:CongressGeorge Santos
Up Next