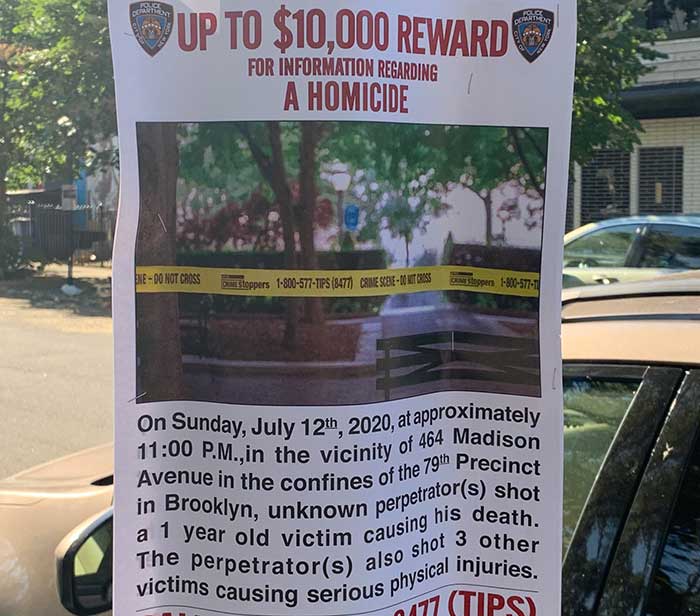 I spent my Sunday afternoon having a wonderful at-home brunch with some friends on the deck of my girlfriend’s house in Bed Stuy. It was just us and two other couples… our quarantine bubble. We bought wine from Bed Vyne Wine and Spirits over on Tompkins, and we cooked food and played this game called Guesstures.

It’s really a fun game, kinda like charades. It was a beautiful day on Sunday, clear and sunny, the kind of Sunday that you spend laughing and kicking back. On this brownstone-lined block, It seemed like everyone was finding ways to enjoy this Sunday. People were either in their backyards grilling and liming, or they were on their stoops talking and people-watching. Our company left at around ten o’clock, and my lady and I took to our normal evening routine of binge-watching a Netflix series. With the peculiar influx in fireworks either being sold or given away in our neighborhoods, we’ve become accustomed to hearing random pops and explosions into the night. This Sunday night was no different, as pops and explosions seemed to ring off until well after midnight. Around that time, we turned the television off and went to bed.

The next morning, I awoke to the news that a one-year old child was killed on Madison between Throop and Marcus Garvey. A sobering realization indeed, as this happened just three blocks from my girlfriend’s home. I know that block well though. When I was a teenager, the younger brother of a friend who lived on that block was killed, also to gun violence. His likeness adorns the wall of the bodega on the corner.

Bed Stuy has become a peculiar place. It’s become the kind of community where you literally have multi-million dollar homes on the same block as housing tenements that house residents who are in abject poverty. The class-divide within the community is probably one of the widest in the entire nation. Can you name another community where a CEO lives right next door to families who are on public assistance? Bed Stuy wasn’t always like this. Before the attraction of development and the price gouging that inevitably came with gentrification, we were a solid community, we were one. In the 1940’s, when Harlem was becoming overcrowded, Bed Stuy became like an annex for Harlem, as droves of Blacks who couldn’t find respite uptown decided to settle in the Stuy. My grandmother was one of those people. When she found work in Sheepshead Bay, she left Harlem and moved into a Brownstone on Madison St between Marcy and Nostrand, just a couple blocks West of the heinous murder that took place on Sunday. Her one-bedroom railroad apartment wasn’t going for $2600 like the rates are today.

Those elders, the first of a new generation of working-class Blacks to move into this community in the 30’s and 40’s, they were all just trying to make it, trying to live out their days in search of something better, collectively. Those of us of a certain age can remember being a child, and doing something wrong while on the street, and word of what you did getting back to your mother, because someone who knew her from the community saw you acting up and decided to give her a phone call. That is the Bed Stuy that I grew up in.

The other day I was walking down Marcy from Dekalb after a run. When I got to Lafayette, there were scores of people from the community sitting in Von King Park, meditating. The event was called Meditating for Black Lives, but I could only count maybe a dozen Black people actually meditating. Meanwhile, across the street from the park there was a long line forming to grab some java from the new boutique style coffee shop right on Greene. But, just two blocks south, as I passed the Louis Armstrong Houses on Quincy and Marcy, the smell of garbage was unbearable.

The garbage had been collected, but the liquid residue from the garbage was still all along the sidewalk and the smell was bringing rodents out to find what was left of their food source. As I walked cautiously, so as to make sure I didn’t step on one of the rats that were scurrying to the street, one of the building doors was propped open. The smell from inside of the building nearly matched the smell outside of the building. Because, while you may live in a newly built apartment building that ensures its tenants that during this Covid-19 pandemic, the maintenance staff will be extra diligent in making sure the common areas of your building are sufficiently disinfected, the Louis Armstrong Homes are run by the New York CIty Housing Authority, and they don’t care how clean the common areas of the Louis Armstrong Houses are.

It was right then that I thought, if the people up the block are serious about caring for Black Lives, I sure hope they are discussing the ways in which systemic racism oppresses Black Lives. I mean, meditation is good, but the best meetings are the ones you leave with action plans.

The truth is that we prop up one type of Bed Stuy and we totally forget about the other. One type of Bed Stuy gets the attention of systemic change agents and policy makers in the form of developers and business executives who have drawings and building plans and money. The other type of Bed Stuy seems to only get the attention of those same change agents and policy makers when a one year old boy gets killed. And, as our new neighbors ride around on $1500 mountain bikes with signs that read Black Lives Matter, the Black Lives in Louis Armstrong Houses and in Medgar Evers Houses and in Betty Shabazz Houses and in Marcy Projects and in Tompkins Projects are being completely ignored, fed unhealthy food, fed unhealthy images of themselves, fed an unhealthy environment, and fed the precept of “less-than as the norm” in subtle ways; like NYCHA not making sure the common areas in the Louis Armstrong Houses are as impeccable as those at 66 Rockwell. They are treated like criminals all day every day, from almost everyone in their community, even their own selves. The guns? They are in our communities because the gun, to America, is as natural as apple pie. And, when we add together the circumstances listed with the hundreds of other circumstances not listed, the results of our wicked behavior towards ourselves is that a precious one-year old boy lost his life on that beautiful Sunday evening. His name was Davell Gardner Jr.