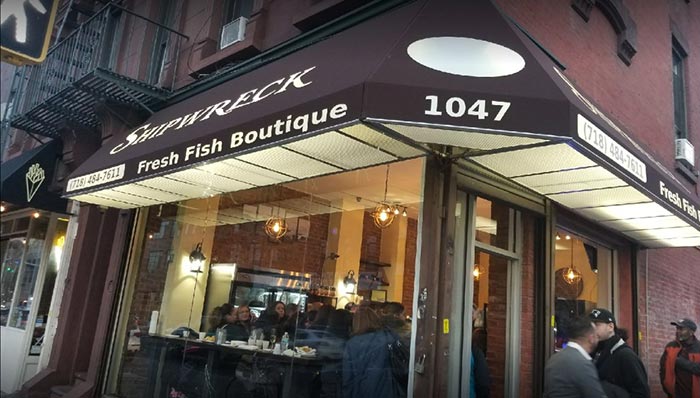 Two weeks ago, I was waiting in a social distancing line to get into a Korean fish market in my neighborhood. It is a fish market that I’ve been patronizing for years; decent prices, good variety, the kind of place where you enjoy shopping because you can get what you want. A friend of mine that does outreach work in the community happened to be walking past. We exchanged greetings and through his mask he said,
“You know, there’s a Black owned fish market not too far from here. You should go check them out. I buy Black whenever I can.”

He told me where it was and I replied that I’d go check it out. Like my friend, I also try to buy Black whenever I can. I had no idea that there was a Black-owned fish market in the community. I made a mental note of the address, bought five pounds of whiting from my normal market and went home.

Yesterday I wanted salmon, wild salmon, not farm raised. I know that my regular fish market has it, but when I thought about my normal place, I remembered that my friend put me on to a Black-owned fish market. I figured that this would be a great opportunity to visit them.
I parked in front of the place. It was clean, almost pristine in appearance. There was a short line outside, because they were only allowing two customers in at a time, masks required. I waited my turn and was beckoned to come inside after a couple minutes. The inside was just as well-manicured as the outside, the woman behind the counter said “Good Afternoon” as soon as I walked in. I looked at their display case, and was immediately disappointed. They were narrow in variety, and the one thing that I came for, the salmon, was priced higher than I expected. The display card didn’t say whether or not the salmon was wild or farm raised, but the price alone was almost twice what I would pay at my normal market. I left. I hopped in my car and drove to the other spot.
But on the way there, I thought about how I just got completely bamboozled. Allow me to tell you how.

Black businesses start off at a disadvantage compared to businesses of other ethnicities. First, start up funding is limited for Black business owners. A study done by Guidant Financial shows that the most popular funding methods of Black business owners was cash and help from family and friends. The problem is that the average household income for Black families is the lowest of all races. Although the optics of a burgeoning Black middle class seem valid, household incomes are still far behind that of other races. That means, even if we’re using cash, we are starting off with less of it than our competitors.

Second, it’s harder for a Black business to get proper financing then it is for any other race. Quite often, even those of us who have dotted all of our I’s and have crossed all of our T’s will still be left with a higher interest rate on any business loans we take out. This means that we can take out the same amount of money as a white business owner, and have to pay back more per month because of the higher interest rate. This means that as a business, our cost of doing business is almost always greater than that of our competitors.

Third, depending on the industry of the business we choose to own, our lack of human experience in that field will ultimately cost us more money than those who have that experience. So, for example, the Korean fish market that I frequent is able to have variety and lower prices because they have family that works in wholesale seafood. The owner told me one time that if I wanted to order some Chilean Sea Bass, I needed to give him a few days notice so that he could have his uncle bring it down to the store for him. I would bet that the Black owned fish market doesn’t have an uncle that owns a wholesale seafood business.
When you combine these three obstacles with the other two dozen that we haven’t discussed, what this leads to is the sobering truth that in order to maintain a Black owned business, Black entrepreneurs sometimes have to charge more for their products, because their cost of doing business is far higher than their competitors. And sometimes that higher cost will result in losing customers who only look at the price tag and never consider the systemic oppression that compels Black businesses to charge more.

And, in that instance when I left their store because their salmon was $27 per pound, I became guilty of that very thing. Bamboozled once again by systemic and inherent racism.
The Black owned fish market was twice as clean as the market I frequent. The workers were twice as polite. And yet because of the price of salmon, I didn’t patronize. I’m ashamed of that, and it reminds me of what Black folk have been saying for generations. In America, a Black person has to be twice as good just to get half as far as a White person. This is what oppression looks like.

Your Hand Sanitizer Could be Killing You