The struggle is about continuity, who came before
Advertisement 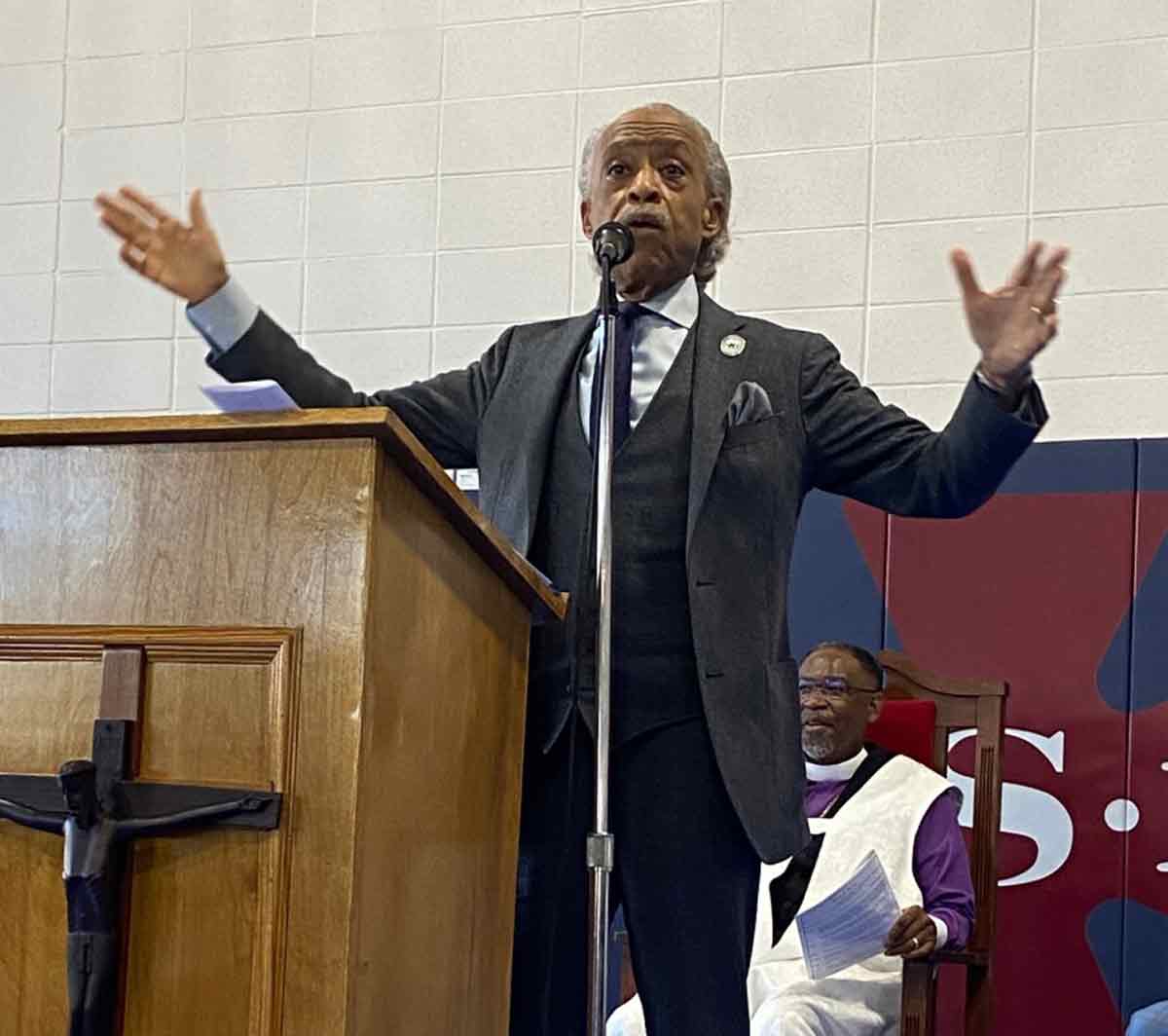 By David Mark Greaves
Before this year’s march across the Edmund Pettus Bridge commemorating Bloody Sunday, Reverend Al Sharpton spoke at the Selma Community Center in Selma, Alabama, and he began saying “as I look out at this audience and look at the times we’re in, my mind went to the Book of Joshua 4th Chapter 19th Verse. Joshua 4 19” Sharpton reads the verse and asks “What do these twelve stones mean that were thrown in Gilgal?

His answer to the question took him from Selma to Ukraine and back. “We come to Selma every year, march across the bridge every year,” but many do that and “not know what the bridge means,” not understand what gave the six hundred peaceful marchers, including future congressman John Lewis, the courage to face Billy clubs, water hoses and dogs, and light the fire in the movement for voting rights.

“Some of us take this as commemoration weekend rather than a continuation of struggle. This is not a ‘Let’s go see the Bridge,’” moment, it’s about being connected. “By not making the connection makes a mockery of the blood shed on that bridge.” He said that when Amelia Boykin, Rev. Hosea Williams, were teargassed and shed blood on that bridge, they did not do that to become a tourist site for the State of Alabama.”

It came as a result of the killing of Jimmy Lee Jackson at a voter registration rally. It was local activist Amelia Boykin, who said, “We will protest what they did to Jimmy and to disenfranchise us from the right to vote.” Hers is one of those names not known to many, but she is one of the stones in the movement.

On Changes in the Culture
Rev. Sharpton said there has always been ebb and flow in moving forward as a people, infighting, dissension, societal pressures are always in the mix. “Even in biblical days, they had not even gotten out of Egypt good, when they started to rebel against Moses,” he noted.
“As soon as we got to mainstream culture, we started calling ourselves the “n” word. Calling our mothers whores and bitches…dropping your pants down and calling your mother a ‘b’.” Sharpton says these are a people in the wilderness, going from “We Shall Overcome” to “It’s Hard Out Here For a Pimp,” as examples of the effect mainstream culture had on a people and making them worshippers of the “Golden Calf”. “Wilderness behavior,” he calls it.

He spoke of the dividers among the people, sowing discord and divisiveness for their own ends and driven by their own agendas. The example he gave of turning on your own, was how Jesse Jackson, “Who came out here as a student” was treated. Jackson had organized busloads of workers, started a movement, and in his run for president energized the Black vote. “Those registered voters he put on in ‘84 and ’88, elected Blacks that would not call his name afterward.”
“People come in, do the work, and you mainstream yourself away from the very struggle that sponsored you.”
He said that Jackson’s run led to Douglas Wilder in Virgina, David Dinkins in New York, “all the way to Barack Obama being president. These stones mean something.”
It is the lives and deeds of these people that enabled successes that are enjoyed today. “You didn’t get here by yourself. You ain’t that smart… …You are the result of people who laid down on that bridge and made a way for you,” said Sharpton.

Respect for Elders
Decrying an attitude he finds too prevalent Sharpton says, “Nowhere in the Bible, nowhere in history, do people disrespect their elders. But you’ve got this new negro ‘woke’ thing. That you feel you can’t make it unless you condemn those ahead of you.”

“The struggle is not about competition, it’s about continuity,” and respecting those who came before. Failure to recognize this, that we are all one people and there is no point in the foolishness of being Black and yet saying how different you are based on where you came from…recently. Barbados, Mississippi, New York. “You were kidnapped and that’s where you were dropped off. Our forefathers made no reservation to come here.”
“The minute they can convince you to denounce Moses, denounce where you come from. They can pick you off and then manipulate you in their way.”

Societal forces has caused a forgetfulness of where we came from, allowed it to “substitute what they want you to believe. Which brings you to where we are right now with the disassembly of voting rights, because they got you “woke. You need to get up and clean up and go to work, otherwise, you’re not woke yet.”

Ukraine and Democracy
Martin the third called me up and said we have to deal with the African students being held in Ukraine. Won’t let them get out. We started calling the State Department, Black caucus is on it. Jim Clyburn is on it. Why? Because we have been trained to think globally.
Anybody who comes out here now and claims it started with them, they’re false prophets.
Sharpton said that knowing where he came from has given him the strength to last. “I’ve come through folks who knew good times and bad times” his “stones in the ground.” .
When we cross that bridge with the vice president, Kamala Harris, a Black woman, don’t ya’ll forget there’s a straight line from Shirley Chisholm to Kamala Harris.
When you see Ketanji Brown Jackson being questioned for the Supreme Court, don’t you forget it was Jim Clyburn who told Joe Biden, to say publicly he’d nominate a Black woman to the Supreme court.

“Don’t you forget that one night at the Democratic National Convention, I was sitting in the front row with the chairman of the DNC when someone rushed by me during the commercial break. It was Jim Clyburn going to Joe Biden saying “you told me you’d nominate a Black woman to the Supreme Court if you’re elected.” Biden said I will,” “Then go out there and say that.”
“When we see Jackson on the Supreme Court, remember it was because of the stone that was Jim Clyburn.”
This country right now is standing up for Democracy in Ukraine. We were raised to pray for people’s rights. We’re all over Selma today, praying for the people in Ukraine. Why? Because we don’t want to see children dislocated. We don’t want to see brutality. We identify with the suffering in Ukraine and the need for democracy. But I also send this message, you cannot fight for democracy in the Ukraine and give repressive voting laws in Alabama. You cannot fight for the right for people to vote in Ukraine, and then turn around and change the voting laws and districts in North Carolina and Georgia. You’ve got to fight for democracy at home and abroad.”

Sharpton spoke of a case now before the court, asserting that courts have no right to reverse the opinion in a redistricting case. This is after a previous court had done just that, declaring a redrawn map to be discriminatory. He said that if the court, which is stacked 6-3 conservative finds for the plaintiff, “then you’re right back at state’s rights when it comes to drawing districts. That’s how close we are to be going back.” [The Supreme Court ruled on Monday that the court’s ruling stands, that the maps were discriminatory.]

A Woman’s Faith
Rev. Sharpton recounted his experiences of being in the courtroom when the verdict comes in on racially-charged cases. He was there when the police were acquitted in the Amadou Diallo trial. And there with the parents when they acquitted the case of Sean Bell. And so it was with uncertainty that he sat between the parents of Ahmaud Arbery, ready to provide comfort as the verdict came. Over the course of the trial when things did not look good, Ahmaud’s mother, Wanda Cooper-Jones would say, “God will find a way.” Sharpton said he’d be on the phone with Benjamin Crump about a jury of eleven whites and one Black in the deep south, “And Wanda would say ‘God will find a way.’”
When the verdict came “guilty” “Wanda said ‘thank you Jesus.’ She taught me the strength of prayer.”
At the end of the presentation, Sharpton said he was going to preach and surely did. He had spoken earlier about the need for roots, and he went back to his, and for two minutes he went into full Baptist minister come-to-give-the-guest-sermon-and-shake-the-congregation with a church organist who knows exactly what to do. Cannot be put into words, must be heard. Here is the link to Sharpton’s full comments https://www.kasu.org/2022-03-06/full-comments-from-rev-al-sharpton-in-selma-alabama. Or https://www.youtube.com/watch?v=YRMrNgMWirk