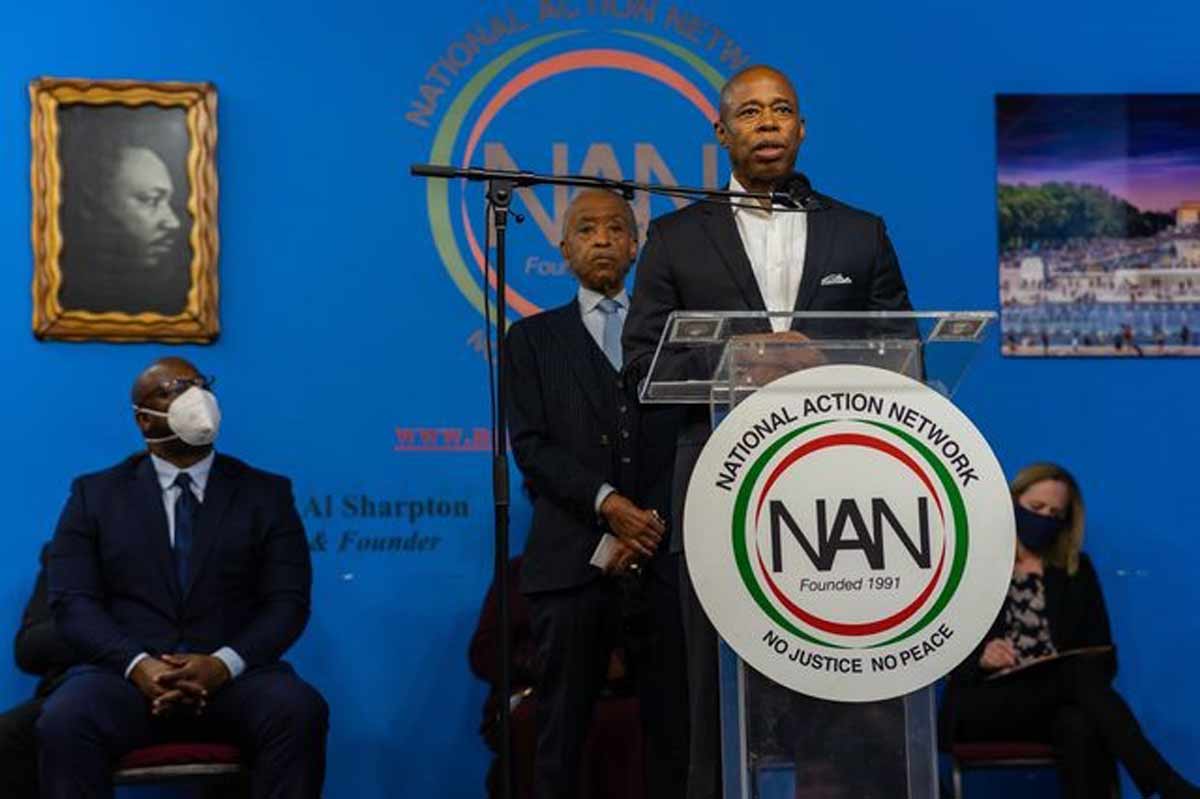 by Ben Yakas
www.gothamist.com
Reverend Al Sharpton and Mayor Eric Adams were joined by Sybrina Fulton and her family to commemorate the 10 year anniversary of the murder of Fulton’s son, Trayvon Martin, in Harlem on Saturday.

“Of course today is a bittersweet day,” said Fulton, who noted that she usually does not make plans or appearances on the anniversary of her son’s death. “A lot of people talk about Trayvon Martin’s story — it’s not a story for me, it’s a tragedy. Because a story has a beginning and an ending. There is no ending for what I carry in my heart.”

Fulton, who started the Trayvon Martin Foundation in the wake of her son’s death to bring awareness to ending gun violence, said “we have to continue to hold people accountable for killing our loved ones…we can’t give up, we’ve come too far.”

Adams credited Fulton with turning her pain into a purpose, transforming it from “a burial into a planting, and today we see the fruits of her harvest in the foundation that she has established and continued to pursue.”

Adams spoke of how Fulton has worked to redefine the term “stand your ground,” the Florida statute that neighborhood watch coordinator George Zimmerman used as his defense after he fatally shot the unarmed 17-year-old Martin on February 26th, 2012, in Sanford, Florida.

Adams argued that Fulton had turned the phrase into a rallying cry to fight against discrimination and unfair laws. He said that continuing the fight for Martin now means fighting against bigotry of all kinds, and connected it to hate crimes happening throughout NYC recently.

Sharpton, who introduced Adams and Fulton, said unequivocally that Martin was a victim of a hate crime: “We wanted today, 10 years later, to say in his name [that] we stand against all hate crime — whether it’s against Blacks, Latinos, Asians, Jews, gays, hate against anybody is wrong. You can’t just fight for yours; you got to fight [for] everyone.”

At Saturday’s event, held at National Action Network’s House of Justice at 145th Street and Lenox Avenue, Sharpton criticized what he called “microwave activists” — people who get “heated up” for one issue and then disappear — and called Adams a “long distance runner” in comparison.
“Eric Adams is not here because he’s mayor, he’s mayor because he’s been there all along,” Sharpton said. “Don’t get it twisted. A lot of folks that will criticize him in the name of their [activism] were not active when Eric Adams was an activist out there, when there were just a few of us. Don’t show up late to class and start taking attendance; get a seat in the back.”

The struggle is about continuity, who came before