The Lesson in the Mural
Advertisement 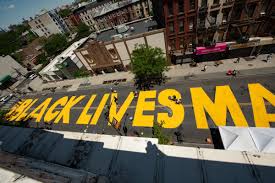 I just got off of the phone with a beautiful group of men and women. Collectively, we were responsible for creating the bulk of the programming on the Black Lives Matter mural in front of Restoration. If you read this column weekly, then you are well aware that I worked on the Friday programming at the mural. Feel Good Fridays ran for 5 weeks and had an economic impact on the corridor in the area of $100k. But, I was never alone in this work. Our collective worked together to bring to life the words that lay along Fulton street between Marcy and Brooklyn Avenues.

We were once a community of institutions. Gardner C. Taylor and Concord Baptist Church. Jitu Weusi and the East. Al Vann, Annette Robinson and VIDA. Our community leaders created physical structures out of their vision for us as a village. They designed curriculums and left blueprints on how to work for the benefit of one another. They did the work way before it became cool to post pictures and share for likes. And that work transformed this community from a concrete jungle into one of the premier neighborhoods in the world. Our new neighbors didn’t do that. Our community institutions did that. When Hattie Carthan arrived at Vernon Avenue between Tompkins and Throop in 1954 after living for a time in Long Island, she found whole blocks that were barren of trees. By the time of her death just 30 years later, she was responsible for the planting of almost 1,800 trees in Brooklyn. That class of leadership, that mindset of nation building was so essential, so germane to the fabric of Bedford Stuyvesant that even though the very name of the neighborhood is known worldwide in every corner of this planet, the very names of the forefathers and foremothers who weaved this tapestry are barely recognizable to people 100 miles out on either side.

The Black Lives Matter Mural, and the names of those lost to police brutality and racial injustice was laid across Fulton Street on June 13th. At the time, this nation was in the throes of protests over the continued hunting and killing of Black men at the hands of White men, be they police officers or just regular run-of-the-mill racist good ole boys. This community was also in a protest, albeit more subtle than marches and chants. The protest happening in this community was a political one. The traditional lines of politics, particularly in the 56th District and the 57th District were being attacked. And on June 23rd, Primary Day, seats that had for years been hand-picked and passed down were taken away, swiped from the traditional order. Democratic Socialism gained ground here, not necessarily because the philosophy is a greater one, but because there has been a void created by our leaders aging out and passing on, and the next generation finds less desire in building institutions and more willingness to live in ego and self-accomplishments.

The mural created conversations though, conversations that might not have been engaged otherwise. Black Lives Matter is a phrase that is currently tweeted 500,000 times a day. It is the phrase now most closely linked with the movement of Black liberation, like it or not. But, what does it mean? What does it mean socially? What does it mean mentally? What does it mean politically? And, with all of the focus put on that mural this summer – the programming, the pictures, the performances, and the political battle as to whether to keep the roadway closed or to open the roadway to traffic, what will it mean to this community once buses and trucks are driving over it again?