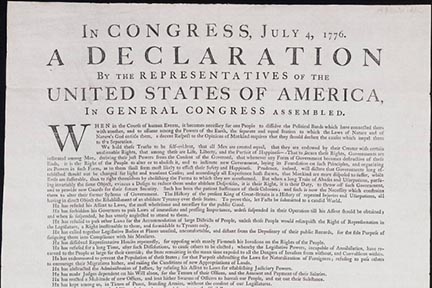 We protest for peace, and then vote leaders into office who maintain perpetual war. We support animal rights while wearing leather shoes and eating a rib-eye steak. We live in a constant state of contradiction, our lives continuously straddling between that which we know to be true definitely, and that which we need to be true momentarily. It’s a simulation error, a flaw in our loop that enables us to be both victim and perpetrator, sympathizer and aggressor. So, yes, we are law-abiding citizens even though we constantly get speeding tickets. And, yes, we are against misogyny, but we still listen to R. Kelly. And as an individual, we admonish others when we witness them contradict themselves, only to be indignant and oblivious to our own contradictions.

America itself is a lesson in contradictions. Our history is full of inconsistency. English settlers arrived in the New World seeking freedom from persecution, and the result was the persecution and annihilation of the indigenous people of this land. Our Declaration of Independence, a document that states that all men are created equal, was written in 1776 at a time when Black slaves were treated as less than human. Most recently, we elected a president who lost by three million votes. And quite like the individual, our country ignores its own conflicting ideals while correcting and directing other nations towards democracy and freedom.

This week, Donald Trump delivered his first State of the Union Address. It was weird. It was like listening to a malcontent substitute teacher trying to discuss the class syllabus – you don’t want to be in the class, he doesn’t want to be in the class and he’s never even read the syllabus, so he’s misconstruing even the simplest concepts. I have never seen a State of the Union Address quite like that. He spoke about MS-13 as if they were ISIS. He spoke about ISIS as if they were eradicated. Then he said we should beef up our nuclear weaponry. Our country has almost 7,000 nuclear warheads, enough to blow the earth up into dust 700 times, and he wants to produce more. He read from his prompter with a monotonous drag that made it difficult to gauge his level of energy. Was he trying to be deliberate? Or did he need his reading glasses to see the words on the prompter? His speech was full of profiles of courage and light on analysis of nation, like a meat loaf that’s more bread crumbs than meat. And he clapped for himself and for others a lot, his meaty paws made an annoying slapping sound into his mic while he clapped. I tried to remember whether or not Obama used to clap during his speeches. If he did, it was done with far more grace and tact.

While speaking about his motion to name Jerusalem the capital of Israel, he referred to the nations that voted against that move, implying that they were not America’s friends. 128 nations voted against Trump’s motion. The UK, France, Germany and Spain all voted against it. Should we believe Trump in thinking that those nations are not our friends? The speech itself didn’t bother me though, I recognize who Trump is by now, a clumsy, belligerent man who loves power but doesn’t understand the beautiful responsibility in it, like a big doofy child that spends his day killing ants with his thumb just because he likes to see them die. What bothered me was the reaction of his audience, for it was they who offered resounding applause to some of the most idiotic statements a president could ever make. A more perfect union is impossible when politicians placate to party lines over serving the people. I found myself screaming at the telly, “You can’t be serious! You’re clapping for that nonsense?? Who are you people!” But I realize who they are and who we are. We are Americans, a nation conflicted with contradictions. We don’t do as we say. We don’t say what we mean. And we fight tyranny abroad, only to sit in a room, listen to the edict of tyranny and stand and applaud it. Shame on us!

From Wakanda with Love