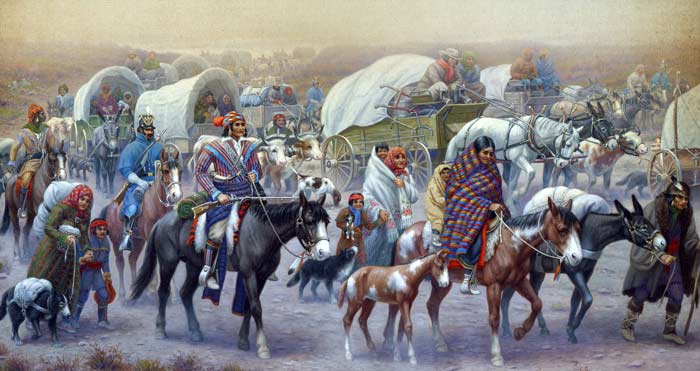 Thinking about the Buffalo Soldiers

I hadn’t given much thought to Indigenous Peoples Day, until I made the connection with the Buffalo Soldier monument now installed at West Point.  In the Black community, the buffalo soldiers are heroes of songs, films and parades. However, at a time when statues of Confederate generals are being taken down, I thought about the role of Black soldiers in making the land safe for the wagon trains of White settlers, a reality never shown in the cavalry portrayed in movies of the old west.

Wear for a moment the moccasins of an indigenous person, a mother gathering the children, the warrior making what would be his last stand, facing an army of Black men working for those who used to hold them as slaves.  The following is from History.com.  It is poignant reading from a Native American perspective.  DG

The soldiers’ main mission was to secure the road from San Antonio to El Paso and restore and maintain order in areas disrupted by Native Americans, many of whom were frustrated with life on Indian reservations and broken promises by the federal government. The Black soldiers, facing their own forms of discrimination from the U.S. government, were tasked with removing another minority group in that government’s name.

The 10th Cavalry was based in Fort Leavenworth, Kansas, and commanded by Colonel Benjamin Grierson. Mustering was slow, partly because the colonel wanted more educated men in the regiment and partly because of a cholera outbreak in the summer of 1867.

In August 1867, the regiment was ordered to Fort Riley, Kansas, with the task of protecting the Pacific Railroad, which was under construction at the time.

Before they left Fort Leavenworth, some troops fought hundreds of Cheyenne in two separate battles near the Saline River. With the support of the 38th Infantry Regiment—which was later consolidated into the 24th Infantry Regiment—the 10th Cavalry pushed back the hostile Indians.

The cavalry lost just one man and several horses despite having inferior equipment and being greatly outnumbered. It was just one of many battles to come.

Both the 9th and 10th Cavalry Regiments participated in dozens upon dozens of skirmishes and larger battles of the Indian Wars as America became obsessed with westward expansion.

For instance, the 9th Cavalry was critical to the success of a three-month, unremitting campaign known as the Red River War against the Kiowas, the Comanches, the Cheyenne and the Arapahoe. It was after this battle that the 10th Cavalry was sent to join them in Texas.

1492: Christopher Columbus lands on a Caribbean Island after three months of traveling. Believing at first that he had reached the East Indies, he describes the natives he meets as “Indians.” On his first day, he orders six natives to be seized as servants.

February 1521: Ponce de Leon departs on another voyage to Florida from San Juan to start a colony. Months after landing, Ponce de Leon is attacked by local Native Americans and fatally wounded.

May 1539: Spanish explorer and conquistador Hernando de Soto lands in Florida to conquer the region. He explores the South under the guidance of Native Americans who had been captured along the way.

October 1540: De Soto and the Spaniards plan to rendezvous with ships in Alabama when they’re attacked by Native Americans. Hundreds of Native Americans are killed in the ensuing battle.

1607: Pocahontas’ brother kidnaps Captain John Smith from the Jamestown colony. Smith later writes that after being threatened by Chief Powhatan, he was saved by Pocahontas. This scenario is debated by historians.

1613: Pocahontas is captured by Captain Samuel Argall in the first Anglo-Powhatan War. While captive, she learns to speak English, converts to Christianity and is given the name “Rebecca.”

1754: The French and Indian War begins, pitting the two groups against English settlements in the North.

May 15, 1756: The Seven Years’ War between the British and the French begins, with Native American alliances aiding the French.

May 7, 1763: Ottawa Chief Pontiac leads Native American forces into battle against the British in Detroit. The British retaliate by attacking Pontiac’s warriors in Detroit on July 31, in what is known as the Battle of Bloody Run. Pontiac and company successfully fend them off, but there are several casualties on both sides.

1785: The Treaty of Hopewell is signed in Georgia, protecting Cherokee Native Americans in the United States and sectioning off their land.

1791: The Treaty of Holston is signed, in which the Cherokee give up all their land outside of the borders previously established.

August 20, 1794: The Battle of Timbers, the last major battle over Northwest territory between Native Americans and the United States following the Revolutionary War, commences and results in U.S. victory.

November 2, 1804: Native American Sacagawea, while 6 months pregnant, meets explorers Meriwether Lewis and William Clark during their exploration of the territory of the Louisiana Purchase. The explorers realize her value as a translator

April 7, 1805: Sacagawea, along with her baby and husband Toussaint Charbonneau, join Lewis and Clark on their voyage.

November 1811: U.S. forces attack Native American War Chief Tecumseh and his younger brother Lalawethika. Their community at the juncture of the Tippecanoe and Wabash rivers is destroyed.

June 18, 1812: President James Madison signs a declaration of war against Britain, beginning the war between U.S. forces and the British, French and Native Americans over independence and territory expansion.

March 27, 1814: Andrew Jackson, along with U.S. forces and Native American allies attack Creek Indians who opposed American expansion and encroachment of their territory in the Battle of Horseshoe Bend. The Creeks cede more than 20 million acres of land after their loss.
May 28, 1830: President Andrew Jackson signs the Indian Removal Act, which gives plots of land west of the Mississippi River to Native American tribes in exchange for land that is taken from them.

1836: The last of the Creek Native Americans leave their land for Oklahoma as part of the Indian removal process. Of the 15,000 Creeks who make the voyage to Oklahoma, more than 3,500 don’t survive.

1838: With only 2,000 Cherokees having left their land in Georgia to cross the Mississippi River, President Martin Van Buren enlists General Winfield Scott and 7,000 troops to speed up the process by holding them at gunpoint and marching them 1,200 miles. More than 5,000 Cherokee die as a result of the journey. The series of relocations of Native American tribes and their hardships and deaths during the journey would become known as the Trail of Tears.

November 29, 1864: 650 Colorado volunteer forces attack Cheyenne and Arapaho encampments along Sand Creek, killing and mutilating more than 150 American Indians during what would become known as the Sand Creek Massacre.

February 8, 1887: President Grover Cleveland signs the Dawes Act, giving the president the authority to divide up land allotted to Native Americans in reservations to individuals.

December 15, 1890: Sitting Bull is killed during a confrontation with Indian police in Grand River, South Dakota.

December 29, 1890: U.S. Armed Forces surround Ghost Dancers led by Chief Big Foot near Wounded Knee Creek in South Dakota, demanding the surrender of their weapons. An estimated 150 Native Americans are killed in the Wounded Knee Massacre, along with 25 men with the U.S. cavalry.

May 1942: Members of the Navajo Nation develop a code to transmit messages and radio messages for the U.S. armed forces during World War II. Eventually hundreds of code talkers from multiple Native American tribes serve in the U.S. Marines during the war.

April 11, 1968: The Indian Civil Rights Act is signed into law by President Lyndon B. Johnson, granting Native American tribes many of the benefits included in the Bill of Rights.

March 15, 2021: Representative Deb Haaland of New Mexico is confirmed as secretary of the Interior, making her the first Native American to lead a cabinet agency. “Growing up in my mother’s Pueblo household made me fierce,” Haaland Tweeted after her confirmation. “I’ll be fierce for all of us, our planet, and all of our protected land.”