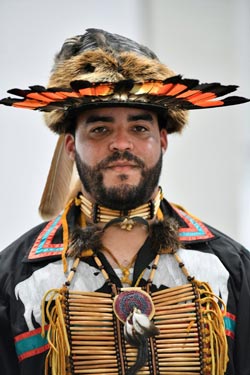 Shane Weeks is Co-Chair of GPWS, a group oriented around protecting and preventing Native American burial grounds and remains on Long Island from being desecrated, removed, or held from the indigenous people the region. He also is a founding member of the Southampton Town / Shinnecock Nation Cultural Heritage Stewardship Committee whose mission is to preserve sites within Southampton Town that are culturally sensitive to the Shinnecock Nation. It also serves to prevent further desecration of uncovered remains found during land development.

by Stephen J. Kotzon
27East.com, Southhampton Press,
Shane Weeks, 32, a member of the Shinnecock Nation who has dedicated himself to preserving his people’s culture, is celebrating the publication of “Good Neighbors: A Shinnecock History from a Shinnecock Perspective.”

He said he hopes the book will serve as a guide for people who want to learn more about Southampton’s indigenous people from their point of view, as opposed to the view of the white settlers who colonized the tribe, as they did to native tribes across the country.
“I’ve been working on the book since 2017,” Weeks said this week. “What made me write it was the fact that almost all the resources I was coming across in my research of our tribe’s history were always told in the third person. It was very rare that I would find something that was written by our people from our own point of view.”

The book, available as an eBook or a softcover, is part memoir, part cultural guide, and part history, with Weeks describing his own experiences and touching on various aspects of the tribe’s history in an informal and accessible way.

Weeks describes how his father taught him how to hunt and fish, and how he launched his own food vending business as a teenager and traveled to powwows across the Northeast to learn more about Native American culture. Along the way, he learned the tribe’s language, its ceremonial dances and songs, and how to make his own regalia. He also picked up a few other skills, like how to use saplings to build a wigwam, or a tree trunk to build a dugout canoe.
A major theme of “Good Neighbors” is that while the Shinnecock themselves have tried to be good neighbors, colonists, who first began to settle the area in the 1640s, have not always returned the favor.

Weeks reminds readers that his ancestors were prevented from speaking their language and practicing their culture and religion starting in the 1600s, all the waythrough to the mid-20th century.

“We had to be good neighbors, so our way of life wouldn’t continue to be destroyed,” he said. “If we tried to stand up for our rights, our people would be treated horribly. That was consistent for a couple of hundred years.”

Weeks believes that because tribe members were not allowed to speak their language or practice their customs, their culture slowly began to fade away, to be replaced with a European view of history that minimized the tribe’s role and wrongly described it as a dying culture.
Fortunately, Weeks said, there have always been some stalwarts who have kept the tribe’s culture alive in the face of that oppression. “There were elders all around Shinnecock who had little bits of it,” he said. “Everybody had a little piece of the puzzle.”