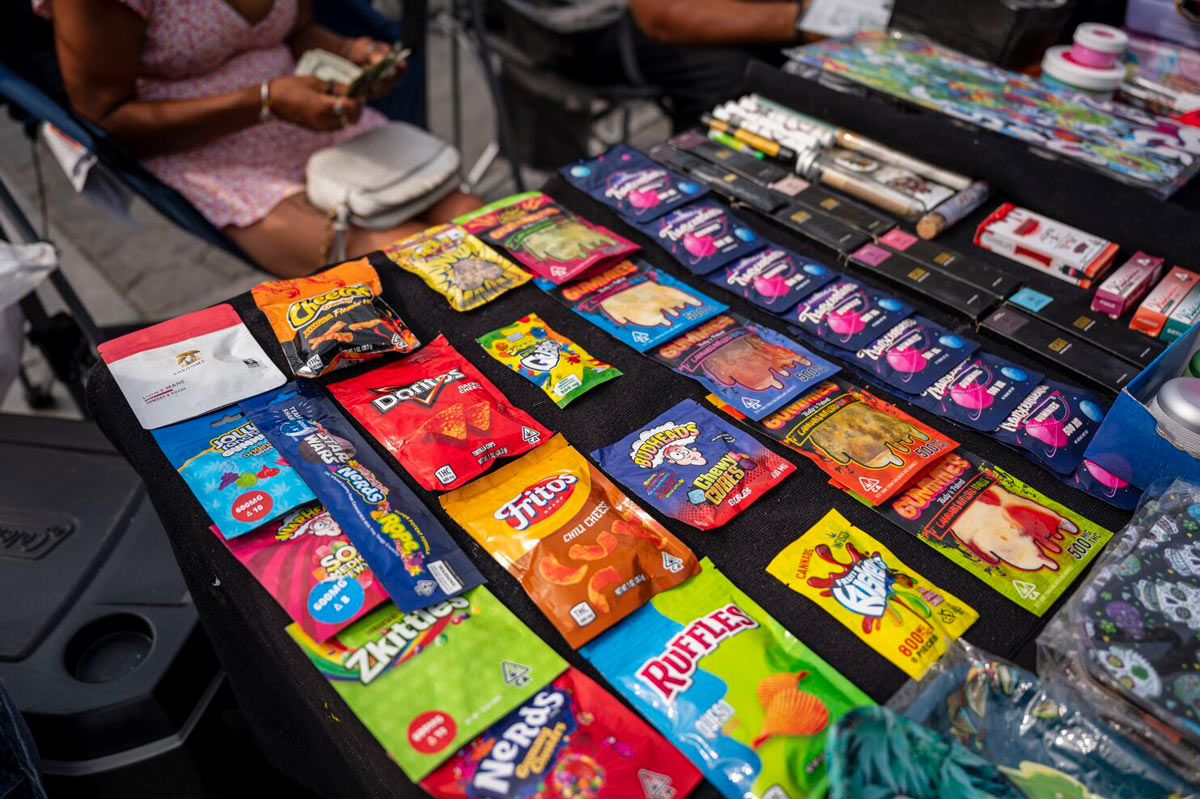 About a month ago, I stopped at a bodega in Bedford Stuyvesant on my way home from an event. I needed batteries for my remote, and I wanted a seltzer. The bodega that I stopped at was one I frequent when I’m in that area; I won’t divulge the location simply out of respect for all parties involved. Anyway, I was waiting in line to pay, and standing in front of me were two young girls, between 18 and 21 years old. When it was their turn at the counter, the girl with the pink jacket on said, “Ahk. Lemme get a Nerds pack.”

I used to like Nerds candy when I was their age too, so I thought nothing of the request until I saw what the man behind the counter was giving them. From some obscure place under the counter, he pulled up a package roughly the size of a small bag of potato chips. The package said Nerds, it was bright red and blue and had all the markings of the candy brand, but it wasn’t candy. The man handed it over to the girl who paid and as soon as she got the package she tore it open and stuck her nose inside.

“Ooh! This pack is fire!”
The bodega guy had just sold these girls a bag of weed, maybe an eighth of an ounce worth. The package was pretty, the sale went pretty much unnoticed, and I left the store that night wondering whether or not what I had just witnessed was legal.
The Marijuana Regulation and Taxation Act was passed on March 31, 2021. This act legalized adult-use cannabis in New York State. The State is currently beginning to distribute licenses, but it has been an arduous process. First, all of the regulatory stuff has to be handled. Then, all social justice components must be set in place. Then, the departments responsible for overseeing and regulating it need to be staffed and trained. Across the borough, cannabis advocacy groups and organizations are preparing those who have been a part of the legacy market to gear up to be ready when license applications become available. I even took part in an event with such a group this summer. The event was called Revelry, organized by an amazing organization called On The Revel. On The Revel creates programming and experiences to democratize the cannabis industry, not just to give a voice to those sectors of our community most affected by the war on drugs but offering information and support to pipeline legacy dealers into the legal market.

But while all this needed prep work is taking place, a gray market is expanding right before our eyes. Smoke shops are opening up by the dozens across Central Brooklyn. These stores have bright lights and cool names like Exotic Life and Buddha Boys. They sell all kinds of smoking products and accessories. Many of them stay open 24 hours a day. And they are all selling cannabis illegally.

The sluggishness of bureaucracy has given way to the advantageous New York City entrepreneur. The ganja market was already an active one in the city. Prior to the signing of MRTA, any New Yorker had a handful of ways to buy cannabis. During the pandemic, courier services became the go-to system for selling cannabis in the city. People used DoorDash for food, Drizly for liquor, and cannabis couriers for weed. The signing of the bill, along with the stand-down approach that NYPD has taken towards cannabis, has created an open-air market that doesn’t look or feel like it’s being regulated at all. And when you add the fact that the last thing the Mayor wants to start doing is raiding Black and Brown stores and arresting people for selling cannabis, you realize that we have a bit of a conundrum in the City as it deals with legal cannabis.

This detente between illegal cannabis dealers and regulatory authorities will almost certainly be short-lived. The moment that licenses are handed out, authorities will most certainly look to punish those who might attempt to continue selling without one. While punishment pre-licenses might give the wrong optics, punishment post-licenses will look just like any other form of bureaucratic punishment – tickets, court appearances, and seizures. In the meantime, the cannabis industry has never been more vibrant in this city. I never thought I’d see the day when you can buy weed at the bodega. And yet, here we are.