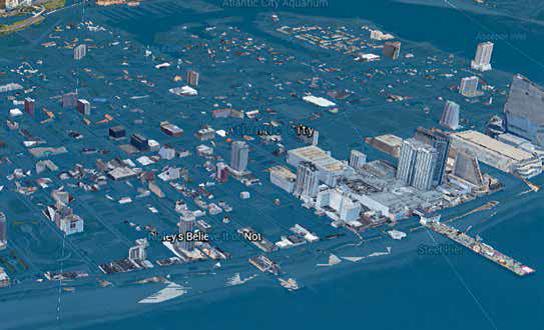 Flood, drought, fire, famine and pestilence. These are some of the consequences of the changing world climate. And they are not distant happenings, they are here now and will only become more fearsome with each passing year, and more and more horrifying with each passing decade.

Last week, we spoke with Dr. Jason Evans, a researcher a Stetson University in Florida about the impact and implications of a rising sea level.

Dr. Evans confirmed that NYC is particularly vulnerable to sea level rise because of the number of assets that are close to the coast. “Hurricane Sandy showed the vulnerability of New York.

Sea level rise is the storm surge that never goes away.  It happens relatively slowly. The first impact is generally seen in storm-water drainage systems built for a different time and that now can get contaminated with seawater. In Miami, when we have what’s called a ‘king tide,’ saltwater comes up through the sewers.”

The sea will rise, says Evans, and the big question is by how much. A convenient date that’s used to make projections is the year 2100. Projections of possible rise by then range from one foot to eleven feet. “At 11 feet, we’re talking about the worst case of climate change,” including the collapse of the Antarctica and Greenland ice sheets and melting glaciers.

We’d like to think the worst case will not happen, but the longer we put off getting carbon emissions down, the more likely we are at risk of that worst scenario.

Evans says change on that level is so massive that we cannot adapt with seawalls and levees.  “Even the Dutch, with their massive flood-control infrastructure, understand they cannot cope with an ever-rising sea and now talk about a strategic retreat from areas that are no longer possible to defend” from the rising waters.

According to Evans, rather than concentrate resources on adapting, they would be better off on “transforming how we run as a nation and across the world.”

“We have to work globally to pull carbon out of the atmosphere through reforestation projects and other kinds of interventions. That’s what the science tells us. If we don’t want to experience large amounts of climate change, if we don’t want massive amounts of sea level rise, that’s the way that we have to do it.”

“The science of it is very clear,” says Evans, but in talks with local groups and officials, he finds that there is an understanding that the sea is rising, but “they don’t want to talk about the causes, just how they can adapt.”

“If we had a high amount of sea level rise, say 5-6 feet by 2100, it is difficult to think what adaption to that would look like. Even in New York City, with a lot of resources, a lot of infrastructure we want to protect, the expense, the complexity, the energy resources, all that is tied into that adaptation, the infrastructure, giant seawalls, pumps, whatever, and when you think of taking that throughout the entire U.S. coast, it becomes unfathomable.”

“We have to transition as rapidly as possible away from the energy sources we use, and we’re already seeing the movement toward wind and solar.

And, of course, a sea level rise of even 5-6 feet implies a massive climate change of which high water is only one indicator. ‘You can’t look at sea-level rise in a box.’ It implies a whole other set of climate factors.

When I think through the planning for that, 80 years in the future. Coastal areas will be the least of our concerns. The big concerns would be agricultural production and how that is going to adapt. If we’re looking at a bad scenario, then energy and resources should be going into agricultural adaptation.”

And this is in addition to the ecological disaster resulting from the warming of the oceans which, as soon as 2050, are projected to contain more plastic than fish. What will that look like in 2100?

Humankind should be on a war-footing to stop the global suicide. The planet will be fine, it’s us who’ll have to leave.

Next month, Our Time Press is beginning a monthly STEM column to encourage interest in the sciences.