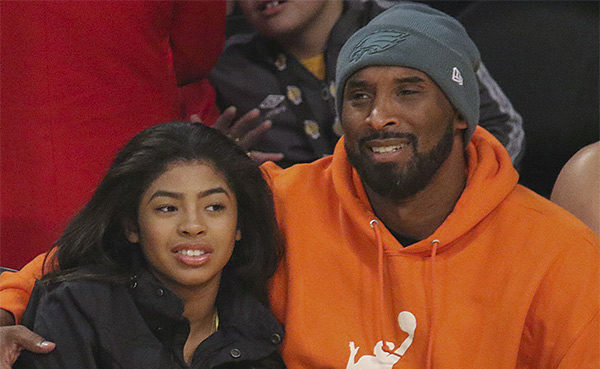 We phoned Brooklyn’s Boys & Girls High School alum Blaine Robinson for assistance in finding an expert on Kobe. In less than two hours, we were on the phone with Blaine’s friend and Bryant’s biographer Roland Lazenby. Amid dozens of interviews with print, broadcast and social media, Lazenby set aside 35 minutes to offer personal reflections on the Lakers star and other top athletes whose stories he has chronicled in best-sellers. Lazenby, a journalist, a coach and college educator, is the author of several biographies of top athletes in “Showboat: The Life of Kobe Bryant” “Michael Jordan: The Life,” and soon-to-be published “Magic Johnson: The Life.”
Bryant was in full dunk-mode in his NBA after-life: moving deeper into fatherhood and family, overseeing his Granity production company for which the Oscar and Sports Emmy winner won an Annie Award for his short film based on his poem, “Dear Basketball,” and his Mamba Sports Academy athletic training center. He gave tremendous attention to the homeless issue. Just before the accident, he celebrated his friend LeBron James surpassing him on the NBA’s all-time scoring list.

Lazenby offers other details in the vast legacy of The Black Mamba as a top scorer: Bryant, like his friends Jordan and James, are Black Power made real. Kobe, in particular, was driven by more than the career that publicly defined him. He authored a legacy plan long before he turned pro and a legend at age 18.
Following are excerpts of an interview with Roland Lazenby in Virginia conducted Sunday, January 26 by David Mark Greaves and Bernice Elizabeth Green (OTP), in Park City, Utah:

Roland Lazenby:Thank you for being patient. This has been a surreal time. This has come so fast … I learned about his death from my dear friend George Mumford, who was the great sports psychologist and mindfulness expert for the Chicago Bulls and then the Los Angeles Lakers. I introduced Mumford to Kobe, and he went on to become one of the greatest influences in Kobe’s life. Mumford and I were both stunned by the news. After all, Kobe was so much more than all the things he brought to the NBA.

Lazenby:Kobe was a culture wolf. He had tremendous creative abilities and gifts. He brought this sophistication into the League at 18, speaking several languages, having a global view, even a recording contract and more. He was a writer – in fact, his grandfather used to say to him, “Kobe, why do you want to be a sweaty basketball player? You could be a writer.” And he could!
But Kobe was paid millions by Adidas, the European shoe company, to turn professional right out of high school, the first high-school player to be offered such a major shoe deal. Soon products were being designed for him. There were players who’d been sweating it out in the NBA for years that got nothing close to that. All of that was driven by his creativity which he put aside to pursue his relentless goal, of being The Man, of being the greatest player ever.
The number one item on his agenda was to compete. I was there at the beginning of his career. He would always tell me, “I want to be The Man. I’m not going to let them change me. I’m not going to let them change my dream. I’m not going to let them break me. I’m going to get there!
“I don’t know how I’m going to get there. But I am.”

His answer to the question he posed when I first met him at the beginning of his career, was the one he already had been pursuing: to outwork everybody. Yes, we all work hard; we all talk about how hard we work. Kobe lived it. He over-trained constantly, even doing middle-of-the-night lifting sessions. Fortunately, he survived his overtraining. He cared at a deeper level. He was bold, brave, brash enough to say he was going to be great and then he did everything possible to prove it.
And, yes, he became The Man — as the most dominant figure in pro basketball.

OTP:You talk about how driven he was, and the competitive aspect. He’s also been repeatedly described as complicated.
Lazenby:He was immensely complicated obviously. He decided he was going to outwork everyone, as I said. I sat down with Michael Jordan in Orlando at the pre-draft camp. We were way up in the arena by ourselves talking about Kobe and I was just immediately struck by the great affinity and admiration. It was obvious what Michael obviously felt for Kobe. He told me, at that time, “You know we all have a path, and the people who came before us to light the way.” He said, “I did have all these talented people around me — but of everyone who I influenced, Kobe was the one who did the work.”
There’s a whole thing about Kobe’s narrative that’s misunderstood. A lot of people were angry with him when he announced that he was turning pro right out of high school because they thought he dared to want to leave the Charlotte Hornets to go to the Lakers and all these things. None of that was true. He didn’t know anything about that.
Sonny Vaccaro, the main basketball guy for Adidas admitted he began telling Kobe he was the “next Jordan” and so this was a whole thing with Adidas. A whole marketing thing. They arranged that trade. They offered millions — something they’d never done to a high school kid – for Kobe to turn pro right out of high school at age 17. Although Kobe’s father had played pro basketball for 16 years, the family needed the money.
So, as he signed the contract to go pro, Kobe looked at Vaccaro and said, “Mr. Vaccaro, is there a way my parents can have this money and I can go play college basketball?”
Tex Winter, the NBA assistant coach, who taught Michael the Triangle Offense, an offensive strategy he co-invented, said the difference between Kobe and Michael was that Michael had three years at the University of North Carolina at Chapel Hill.
(OTP note to readers: Below is the actual commentary from Lazenby’s Lakernoise blog:
A few years back, the Lakers coaching staff concluded Bryant and Jordan were much alike, almost eerie, in fact, when it came to the alpha male qualities of their competitive natures.
Kobe and Michael were ruthless when it came to winning, everyone agreed.
And their skills were similar.
Except Michael’s hands were larger.
The major difference between the two came with college experience. Jordan had played in a basketball system at North Carolina, thus he was better prepared to play within a team concept.)
Kobe was a super bonus baby. He was viewed as the kid cutting in line at the cafeteria. It created a tremendous void between Kobe and these grown men who were his teammates back in the day when the league was much older than it is now.

OTP:But there are complexities.
Lazenby:He almost destroyed his career. He had criminal charges [He had been charged with rape in 2003], conflicts with everybody, right and left. Perhaps all of this was a reaction to that pressure. The strength of character to rebuild that career after almost obliterating it – that to me is a remarkable human feat.

OTP:The languages, poetry, writing of the books — is that the thing that truly differentiates him from others?
Lazenby:I hesitate to say that because there are so many different narratives in sports. Each of these top players is a Black power story. Each story has its own narrative. These men are not just basketball players. They are large business and economic figures, cultural figures just adored globally, but they are also important figures in the long struggle culturally, racially in terms of justice in America.
LeBron James was born to a 16-year-old alcoholic mother reeling from deaths in her family. The man said to be LeBron’s father was murdered in a card game in 1994 when LeBron was just nine years old. He had none of the advantages. The big moment in LeBron’s life was when the family moved into public housing in Akron when he was 12 or 13.
But what LeBron has done stops you in your tracks. LeBron James, today, owns the NBA.
You don’t think of justice in that regard in terms of Kobe Bryant, who was a child of affluence. But each story is overwhelmingly impressive for different reasons.

OTP:Many of these athletes like Kobe bring something to not only the game, but to life – based upon their experiences.
Lazenby:Each player is a Black power story. Each of these stories has his or her own narrative. The narratives are not what people think they are about – “just basketball players.” We always make assumptions about each other. It’s just what we do. These players also are important figures in the long struggle for justice in America and changing things in ways that are profound.
I’m writing Magic Johnson’s biography now. My Jordan book was 700 pages. I spent time researching sharecroppers to get Michael’s story. Jordan is the richest Black man in the world. His great grandfather lived in an abject situation on the coastal plain of North Carolina.
These narratives run deep and offer displays of fierce character. These major NBA figures are not something that just happened. They are the products of generations and it’s always fascinating to put them into a larger cultural context. That’s what I try to do in these biographies, highlight the people in their families who came before them, people of immense strength and character who weren’t usually valued [during] those deeply racist earlier years.
We come to sporting events for the game, but we’re also seeking deeper meaning. We all are seeking “a better way.”
It’s fascinating to put these journeys of these top athletic figures into larger cultural contexts. That’s what I attempt to do. So, to me, Kobe’s remarkable feat is the strength of character he had to rebuild his career after it was almost obliterated.

Publishers’ note: After 20 seasons and five NBA titles with the Los Angeles Lakers, Kobe Bryant directed his energies to a quest, as he revealed in a CBS podcast interview November 2019, to “impact lives through storytelling.” He told Dana Jacobson, “Nothing in the world happens without a story.”