A Coalition Rallies to Save Abolitionist’s Home
Advertisement 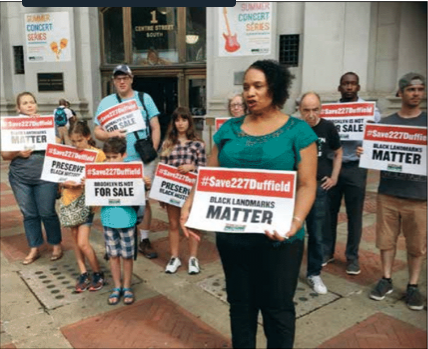 A coalition of four community organizations rallied in front of the Manhattan Municipal Building at 1 Centre Street, to get the Landmarks Preservation Commission to preserve 227 Duffield Street in downtown Brooklyn. By merely adding it to its list of buildings to consider for landmark status, the developer’s request to demolish the building will be put on hold. So far, the Commission’s only response

has been, the request for landmark status is “under review.”

Not satisfied with the Commission’s response, the determined group of men, women and children shouted repeatedly, “Abolitionist’s home. Leave it alone.”  Among them was Aleah Bacquie Vaughn, “Director” of Circle for Justice Innovations, organizing to end mass incarceration and mass criminalization. She joined the 227 coalition after noticing a picture of Harriet Tubman in the window and a sign indicating the building was to be demolished. The disconnect motivated her to investigate. She discovered the previous owner Joy Chatell aka “Mama Joy” had been in a long-term struggle to obtain landmark status for her building. The building had once been the home of abolitionists Harriet and Thomas Truesdell.

Although the City disputes the claim, many also maintain the building had been a refuge for runaway slaves and that escape tunnels connected to other buildings – all of which have since been demolished. Vaughn also learned that Mama Joy’s house was negatively impacted by the building of the Indigo Hotel next door and the Sheraton across the street. Both caused flooding in her building, which resulted in mold.

Building violation and limited finances forced Mama Joy to enter into a deal with a contractor: repairs on her home in exchange for partial ownership. With a renovated home, Mama was hoping to generate income from the site as an educational and cultural center. However, no violations were lifted because the work provided did not meet City standards. To sully matters even more, the contractor sold his share of the property. In 2014, Mama Joy died from interstitial lung disease often caused by household mold. According to the NYC Department of Buildings website, on August 8, Robert Bianchini of ARC Architecture & Design Studio of Forest Hills, has submitted a pre-filing request to demolish the building and erect a thirteen story, mixed-use building on the site for owner Samiel Hanasab.

Over 3,000 have signed the petition to preserve 227 Duffield and extend its life and that number is increasing by the hour on the Equity for Flatbush (E4F) website. Another demonstrator, Raul Rothblatt of Five Boros to Freedom, a new organization to change the narrative about what NYC represents, maintains 227 “is the last remnant of the history that this building represents.”

After a few speeches and rallying cries, the demonstrators went through scanning in the Municipal Building and made their way to the ninth floor to the Landmarks Preservation Commissioner’s Office. Christabel Gough, secretary of Society for the Architecture of the City, summarized our cause with an administrator and others left literature.

The coalition is hoping its luck is not running out. “We saved the building from eminent domain ten years ago,” said Michael Higgins of Families United for Racial and Economic Equality (FUREE). “Now we are in a fight to save it again. We want to make sure the building gets the recognition it deserves.”

Some protesters brought their children along such a Rahwa Haile of Brooklyn Movement Center and Equality for Flatbush whose son Jude Prosper, 5 stood with the demonstrators because he, too, wanted to save “The Freedom House.”

Thinker’s Notebook: Whose Streets? Our Streets! How Community-in-Action Looks

Bedford-Stuyvesant Finally Gets A Sanitation Garage