Harris in Selma: ‘We will not let setbacks stop us’
Advertisement 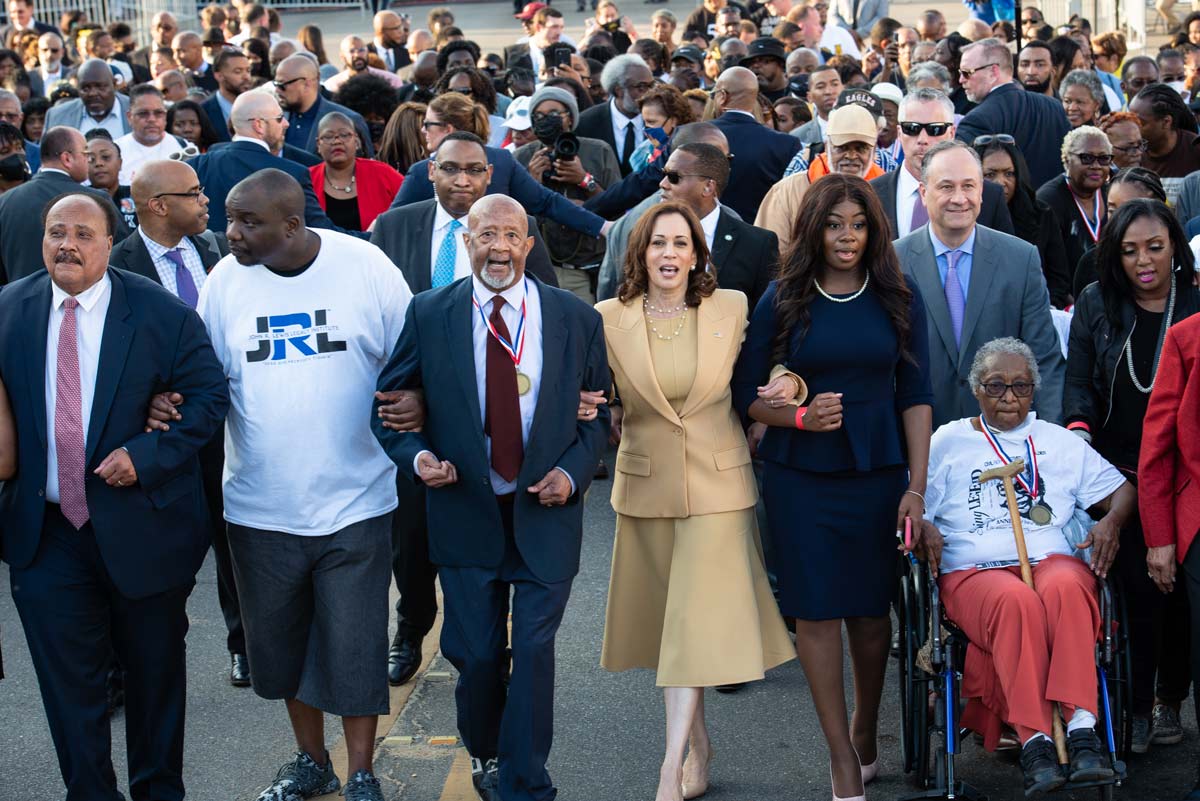 By Monique Beals – The Hill
Vice President Kamala Harris promised to push ahead with the Biden administration’s voting rights agenda despite recent setbacks during her remarks in Selma, Ala. on Sunday commemorating the 57th anniversary of “Bloody Sunday.”
“In a moment of great uncertainty, those marchers pressed forward and they crossed,” Harris said on Sunday of the civil rights activists who in 1965 crossed Edmund Pettus Bridge in Selma and were beaten and tear gassed.

“We must do the same. We must lock our arms and march forward,” she added. “We will not let setbacks stop us.”
Harris said that honoring the legacy of those who marched would require a push for “Congress to pass federal voting rights legislation” and “to lift up state legislatures that have passed pro-voter laws and that we keep fighting to prevent the passage of the anti-voter laws.”
“It demands we keep going to court to defend this sacred freedom, and it demands we register voters, volunteer as election workers and yes, of course, drive souls to the polls,” the vice president added.

Harris, who is the first African American, Indian American and female vice president, linked arms with fellow marchers and led a large crowd across the historic bridge.
Harris was joined by Secretary of Housing and Urban Development Marcia Fudge, Secretary of Transportation Pete Buttigieg, Secretary of Education Miguel Cardona and others on the same bridge where marchers including the late Rep. John Lewis were met with violence.
On Tuesday during his first State of the Union address, Biden spoke of voting rights and called upon Congress to pass the John Lewis Voting Rights Advancement Act and the Freedom to Vote Act, both of which have faced Republican opposition in the Senate, which requires 60 votes.

Democrats were also unable to unify their 50 senators around removing the Senate filibuster to allow them to move forward alone on voting rights legislation, with Sens. Joe Manchin (D-W.Va.) and Kyrsten Sinema (D-Ariz.) voting down the reform proposal.
Last year on “Bloody Sunday,” Biden signed an executive order directing federal agencies to strengthen voting rights and reduce barriers to the ballot box for minority groups.
Since then, Harris has made voting rights a critical part of her agenda as Republican strongholds have enacted laws that critics say disenfranchise certain people, especially communities of color.

“President Biden and I are working with this cause every day,” she said Sunday. “We have put the full power of the executive branch behind our shared effort, and if we all continue to work together, to march together, to fight together, we will secure freedom to vote.”

Politics is Not a Spectator Sport