Women on the Move
Advertisement 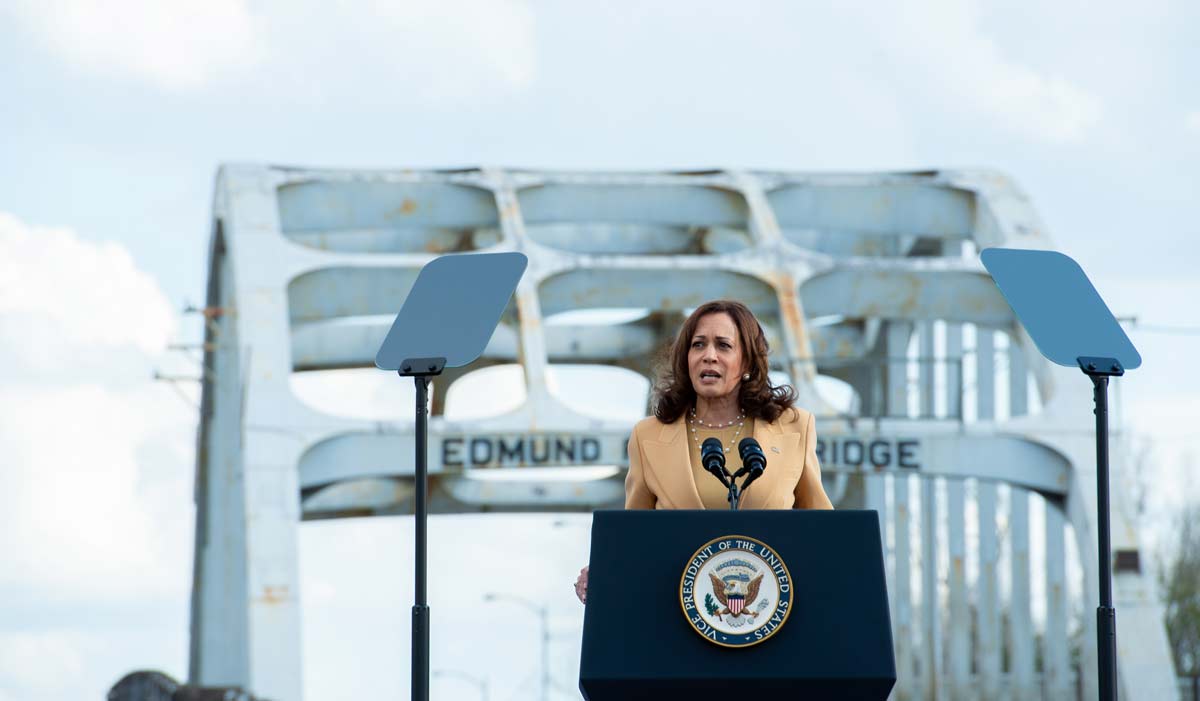 Taking the Lead: On Sunday, March 6, 2022, in Selma, Alabama, Kamala Harris, Vice President of the United States, made remarks prior to her ceremonial crossing of The Edmund Pettus Bridge in Selma, Alabama to commemorate the 57th anniversary of Bloody Sunday. A few days later Harris left for negotiations in Poland. See stories on page 11. (Credit Image: © Andi Rice - Pool Via Cnp/CNP via ZUMA Press Wire) Articles Page 11

Analysis by
Chris Cillizza, CNN
Editor-at-large
It’s been a rough first year as vice president for Kamala Harris.
Beset by staff departures and lingering questions about how good a fit she is for the job, Harris has struggled to find her political footing. (Worth noting: That’s not terribly unique. Being vice president is a notoriously difficult and, at times, thankless, job.)

But with Harris jetting to Europe on Wednesday – amid the ongoing Russian invasion into Ukraine – the possibility exists that she is about to meet her moment.

As CNN’s Kevin Liptak noted Wednesday morning, Harris is traveling to Poland and Romania at a decidedly fraught time:
“The Polish government announced Tuesday that it was putting its fleet of MiG jets at American disposal to supply to Ukraine, an idea the US rejected out of hand. The White House was completely caught off guard by the Polish offer, according to people familiar with the matter, despite officials saying in the preceding days they’d been discussing options with their counterparts.

“Harris will be tasked with smoothing over the situation as she arrives there late Wednesday on a mission to reassure one of NATO’s easternmost allies the United States remains committed to its security amid fresh worries about Russia’s intentions. The trip is the second time in a month that Harris has been dispatched to Europe as the Biden administration seeks to rally international support behind its efforts to isolate and punish Russia for the war in Ukraine.”

This sort of tricky international diplomacy at a moment of crisis for Europe and the world is when (and how) leaders are made. If Harris can find a way through the this fraught period with Poland, as well as the ongoing push by Ukraine for a no-fly zone, it would amount to a major win – not just for the Biden administration, but for Harris in particular.
And the simple fact is that, to date, Harris has had very few of those during her time as vice president.

As CNN’s Edward-Isaac Dovere and Jasmine Wright wrote last November:
“Worn out by what they see as entrenched dysfunction and lack of focus, key West Wing aides have largely thrown up their hands at Vice President Kamala Harris and her staff – deciding there simply isn’t time to deal with them right now, especially at a moment when President Joe Biden faces quickly multiplying legislative and political concerns.”

That was one of a slew of stories around that time that painted Harris – and Biden – as frustrated with the vice president’s office. It didn’t help that Harris also lost several senior members of her communications staff around the same time – although the White House insisted that those departures were planned and were not evidence of chaos within the her office. (Harris didn’t help her cause when, in an interview last December, she refused to answer whether she would have done anything differently during her first year in office.)
Harris’ poll numbers have also suffered recently.

A Fox poll in January showed that while 43% of registered voters approved of the job she was doing, 54% disapproved. An NBC survey around that same time showed that a near-majority (49%) of Americans held a negative view of Harris, compared to 32% who viewed her positively and 14% who were neutral on her.

So far in 2022, Harris has kept a lower profile, aside from a diplomatic trip to Munich in February. Her missions to Europe over the last month are, without question, her biggest moments of the year – and very probably – her vice presidency to date
Diplomacy and foreign policy tend to be, primarily, the mandate of the executive branch. This is not the sort of mission with which a House member or a senator is tasked. This is uniquely a job for a president or a vice president.

That matters – because when talking about Harris (and her performance in office), it’s impossible not to mention her own future presidential prospects, whether in 2024 if Biden decides not to run again or in 2028. The world stage is where politicians prove their mettle, and persuade voters as to whether they have what it takes to represent the entire United States as its leader.

Harris badly needs a moment to show that she could step into the top job. Those moments don’t come along very often, but this week’s trip is very much one of them.