Why You Should Stay Away From Borough Park
Advertisement 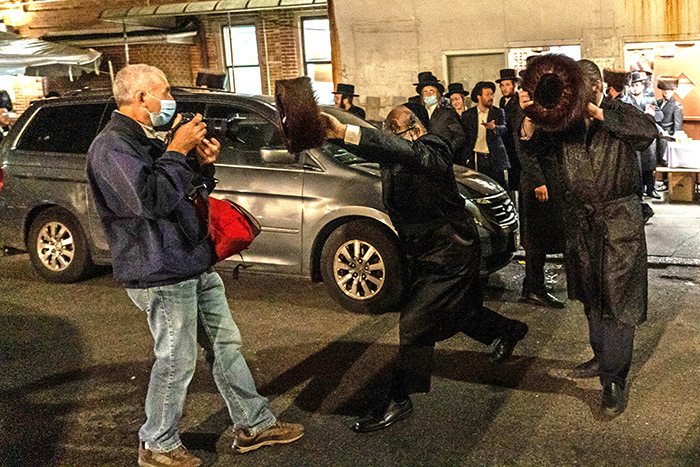 People in my neighborhood are pretty responsible when it comes to Covid.
Walking along Greene Avenue or down Lafayette Avenue, you come across people who are mostly masked. Many of those who aren’t will don their mask as they pass you. Lines to enter coffee shops are queued up in a responsible manner. Virtually all of the stores and shops along DeKalb will demand that you put a mask on before entering. Many of the churches in this community are still closed, and the ones that are open keep to a strict policy regarding the patrons they let inside. As a community, Clinton Hill gets it. And, our case numbers prove it out. Clinton Hill has been consistently at or below that 1% number regarding new cases.
You see, experiencing the last six months of a pandemic has educated and reinforced good health practices. Wear a mask in public. Keep your hands clean and away from your face when you are outside. Maintain an effective distance from others. Stay out of clusters of random people. One might have predicted that the many protests in our communities which took place throughout the summer would’ve caused our case numbers to skyrocket. But, that didn’t happen because most people get it. Even in the schools in this neighborhood you find kids keeping their masks on and using hand sanitizer. Even the kids in this community get it.

A couple weeks ago, I traveled out to Gravesend to visit a pet store. On my way back I drove through Borough Park, straight down Fort Hamilton Parkway. Growing up in Crown Heights and Clinton Hill, this area of Brooklyn was seldom seen as a child. It was a different world, and I don’t mean the place you could find Denise Huxtable and Dwayne Wayne. Borough Park was one of those places where if you were a Black kid from Brooklyn, you’d feel like a total outsider if you found yourself there. It still is one of those places. Currently, less than 1% of the population of Borough Park is Black. The community is mostly Hasidic and Orthodox Jews, with Asians and Latinx sprinkled mostly along the eastern end of the neighborhood. Driving through, I saw Trump signs on lawns. Not just one or two, but one or two per block. What I didn’t see in Borough Park though were masks. Almost no one we drove past was wearing a mask. As this was during the beginning of the Jewish holiday season, I drove past clusters of men and women in various stages of moving to and fro – going in and out of stores, standing in front of synagogues – and yet no masks on anyone.

“Here in Borough Park, we don’t go by the laws of America. We have our own laws.”A member of the Orthodox community in Borough Park, Brooklyn on Wednesday, October 7 where a man was beaten, and masks burned during a protest of state-imposed COVID lockdown and restrictions. As reported in the New York Daily News, Thursday, October 8*

Instead of taking heed to the danger in their community, residents of Borough Park took to the streets in protest. Amidst the chants of “Jewish Lives Matter”, community members were defiant especially as it deals with their religious practices. They burned masks in effigy and accused Cuomo of playing bad politics by not restricting BLM protests and also by allegedly targeting this Jewish community because they support Trump. One of the loudest voices of the protest was Heshy Tischler, a right wing radio host and candidate for the City Council. His rants have only helped to rile up this community to buck against the restrictions. On one night he declared to the community that “We are at war!” On another night, he described the wife of Mayor DeBlasio as a “retard woman” and a “coon”.

Covid attacks racists and deniers in the same way it attacks any of us. The fact that the Borough Park community doesn’t wish to follow safe and healthy practices may or may not be connected to their support of Trump, who knows. But Borough Park is not an island. It is a community that rests in a borough that is home to over 3 million people, and a spike in their community can be the catalyst to our entire borough rolling back into restrictions. The belligerent nature of their behavior is what is most telling. They don’t care about protecting themselves from the virus. Our only defense against such wanton ignorance is to guard our interactions with people from their community.

I won’t be driving down Fort Hamilton Parkway anytime soon. They don’t get it.