What's Going On: AS THE WORLD TURNS
Advertisement 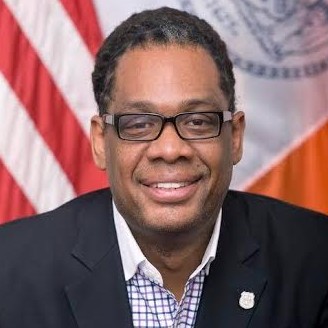 NY/NOV. 7: Will history repeat itself in the NYC mayoral race? Will incumbent Mayor de Blasio get 96% of the large Black vote like he did in 2014? Pollsters are predicting a low turnout but a major win for Hizzoner who captured commanding figures in 2014: Latinos 87%, Asians 70% and whites 50%.  Early 11/7 election results verify that Democrats de Blasio, Public Advocate Letitia James and Comptroller Scott Stringer victories. Other Democrats beating their chests include Ralph Northam, Virginia Governor-elect and Phil Murphy, NJ Governor-elect.

The next big chapter in NYC political current events is who becomes the next Speaker of the City Council, the second-most powerful title in local government.   Eight Councilmen eye the coveted job. They are Robert E. Cornegy, Richie Torres, Jumaane Williams, Donovan Richards, Jimmy Van Bramer, Ydanis Rodriguez who are African-American and Latino, and Corey Johnson, Mark Levine, who are white.   There needs to be more majority people in leadership roles in NYS/NYC politics.

NYS DEMOCRATS: Geoff Berman, a former President Barack Obama aide, was named NYS Democrat Executive Director, replacing African-American Basil Smikle, who held the title since early 2015. Read a few accounts about Berman’s rise and all of them included either an Obama or Smikle picture. Wonder why! Smikle will be NYS Democrat Sr. Advisor. As NY Democrats get ready for major elections next year to help reclaim their majority in the US Congress and Senate, and to reelect NYS Governor Cuomo to a 3rd term reelection, why is there no Black leadership in the party.

ATLANTA: Headlines read, “Is Atlanta, America’s Black Mecca, ready for a white mayor”? and “Should the next Mayor of Atlanta Be Black? Atlanta has had Black mayors since the Gerald Ford presidency, which has something to do with a Black majority. Atlanta is now 51% Black.   Current Mayor Kasim Reed is term-limited. Eight people are competing for the job, including Keisha Lance Bottoms, a Black Councilwoman and three white candidates, including Mary Norwood. With this octet of players, a runoff is inevitable.

President Donald Trump visits five Asian countries – South Korea, Japan, China, Vietnam and the Philippines – over 12 days. During a stopover in Hawaii, POTUS was greeted by protesters with signs that read, “Welcome to Kenya”.   North Korea will no doubt be a major talking point on his Asia itinerary.

POLITICS READER: Democratic operative Donna Brazile, who served as Interim Democratic National Committee Chair in 2016, wrote an insider book, “HACKS: The Inside Story of the Break-Ins and Breakdowns that put Donald Trump into the White House”. She says that Hillary Clinton controlled the party last year having raised so much money for a “cupboard-is-bare” party, which is dysfunctional.  The timing of the publication is strategic.

On the other side of the aisle former 41st U.S. President George H.W. Bush wrote a book, THE LAST REPUBLICANS, refers to President Trump as a “blowhard”.

Read the 11/6 Time magazine cover story, THE WRECKING CREW: How Trump’s Cabinet is Dismantling Government As We Know It. Article studies the intersections of cabinet members/departments Scott Pruitt, EPA; Ben Carson, HUD and Betsy DeVos, who is “righting government overreach on campuses”.

THEATER: “SCHOOL GIRLS OR THE AFRICAN GIRLS MEAN PLAY” comedy is poised on reigning Queen Bee at a prestigious Ghana boarding school for girls, a Miss Universe aspirant, an ostensible shoo-in contestant. Her world starts to fall apart with the arrival of a new teen, equally beautiful and talented.   Directed by Rebecca Taichman from a play by Jocelyn Bioh, SCHOOL GIRLS runs through December 10 at the Lucille Lortel Theatre, located at 121 Christopher Street, Manhattan.

FINE ART: Check out the exhibit, NOT OF THIS ISLAND, showcasing the works of four fine artists, including internationally renown and Ghanaian-born TAFA, which runs from November 7 to December 22 at the Interchurch Center, 475 Riverside Drive @ 120th Street in Harlem. Gallery hours are 9-5 pm.     Exhibit reception will be held on November 16, 5:30 to7 pm.

Burgess Fine Arts presents new exhibit, MYTH AND MIRAGE: The Art of Avel DeKnight, at the Burgess Fine Arts Collection in TriBeca until 12/31/17, by appointment. [Visit Burgessfinearts.com or call 212.406.2400]

RIP: David Downing, 74, transitioned last week in Los Angeles. A Harlem native son, Downing was an actor, director, coach, teacher.  An Negro Ensemble Company( NEC) charter member, he starred and performed in many of its productions like “The Great MacDaddy”, “Ceremonies in Dark Old Men” and “Song of the Lusitanian Bogey”.   He also worked on so many other theater classics including “Master Harold and the Boys”, “I’m Not Rappoport”, on and off-Broadway. In the 80s, he moved to Los Angeles where he worked extensively in TV prime time shows like “The Jeffersons”, “All in the Family”, “Designing Women”, “Fresh Prince” and on films like “Gordon’s War” and “Up The Sandbox”. David is the beloved older brother of NY-based marketing and theater production guru Darryl T. Downing.

RIP: George Edward Tait transitioned on November 5. Born in Oakland, he was raised in Harlem and evolved into musician, educator, activist who was known as the “Poet Laureate of Harlem”. He taught at Queens College and Malcolm-King College.   Defining music as the poetry of sound, Tait was a bandleader who founded the group Black Massical Music. He is survived by his wife Akosua and sons Damani, Sekou and Kamani. Messages of condolence can be sent to welovetamerry@aol.com.