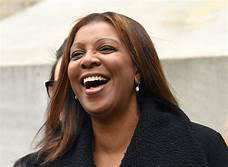 What’s Going On
By Victoria Horsford

The cityandstateny.com just released a new list, the “2019 Power of Diversity BLACK 100.”  Don’t know the criteria for listing but I had fun adding my comments to the “Black Power Elite” bios.   WGO will list power people, 51 to 100.   The column will include the top 50 which will be followed by the other 50 next week.   1) Letitia James, NYS Attorney General from Brooklyn who may one day be a candidate for NYS governor; 2) Hakeem Jeffries, Chairman of the House Democratic Caucus, Brooklyn; 3) Carl Heastie, NYS Assembly Speaker, a Bronx resident who succeeded Sheldon Silver; 4) Andrea Stewart-Cousins, Westchester, NYS Senate Majority Leader, first Black woman to man the post; 5) Eric Adams, Brooklyn Boro President, possible 2021 mayoral contender;     Alas, no Harlem leader in the top tier, a rarity in Downstate politics.

Other leaders who passed muster with cityandstateny.com: 6) Jumaane Williams, NYC Public Advocate and second-in-command to NYC Mayor; 7) George Gresham, President of 1199 SEIU, a health care union; 8) Congressman Gregory Meeks is the first Black to head the Queens Democratic Party; 9) The First Lady of NYC,  Chirlane McCray, known for her THRIVE NY program, a mental health initiative–frequently compared to Hillary, she plans a career in elected politics;

“A Christmas Carol in Harlem” is a clever theatrical reimagining of the timeless Dickens classic about Scrooge and the spirit of the Yuletide.    This Classical Theatre of Harlem family-friendly production unfolds on Harlem’s not- so-mean streets, owned by Scrooge, a villainous real estate developer.  The sequences of the “Spirits of Xmas Past, Present and Future” are worth the price of admission.  A story with a lot of heart.jpy and energy, “A Christmas Carol in Harlem” runs at the Aaron Davis Hall on Convent and 135th Street, Manhattan, runs through Saturday, 12/ 21.    [Visit CTHNYC.ORG]

Try to see the film “QUEEN & SLIM,” written and co-produced by Lena Waithes and directed by Melina Matsoukas. Story centers on Queen, a lawyer, and Slim, a nonprofessional man. Their first date is a disaster. While driving Queen home, Slim has an encounter with police which turns ugly and the couple is on the lam and they fall in love.  Film stars Daniel Kaluuya and Jodie Turner-Smith is the first Hollywood-financed romance with two dark-hued African-Americans.  Blacks/Police issue is the subject of one of the Ailey dances.

Broadway’s critically acclaimed “THE SLAVE PLAY” at the Golden Theater is a must-see.  Written by Jeremy O. Harris and directed by Robert O’Hara, both African-American theater denizens, the drama wreaks havoc with the senses and sensibilities as it is poised on the intersections of race, gender and sexuality in the 21st century.  Has the plantation been really interred in the American psyche?!   Play runs through January 19. [Visit slaveplaybroadway.com]

A Harlem-based  branding/media consultant, Victoria can be reached at Victoria.horsford@gmail.com