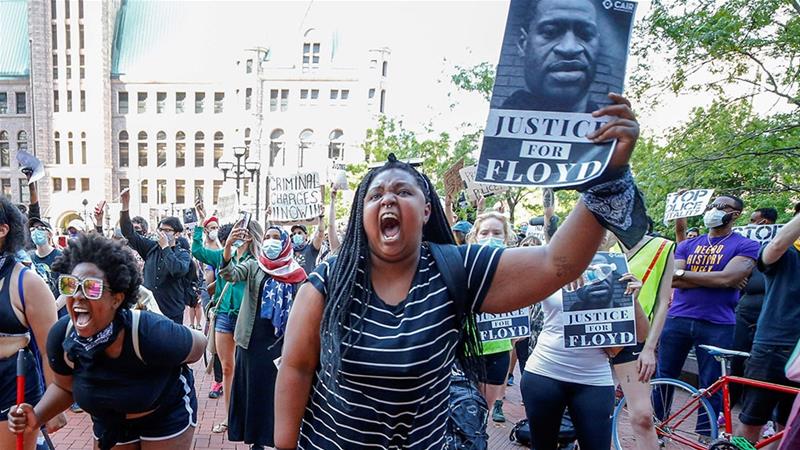 Again, “I can’t breathe.” This time it’s not a chokehold that a police officer used for killing Lloyd George, yet another Black man. It was a knee on the neck while other officers stood and watched, the same as in old pictures of the crowds at lynchings and burnings of Black people. This primitive desire to rejoice in the pain of others, like the picnics at lynchings and the ancient Romans at the Coliseum, will not be prayed away or brought to reason. Only surveillance and severe punishment will deter. The demand for justice is on-going, and Black people have to fight that battle as well as the virus and voter suppression..

100,000 Lives Lost,
A Nation in Danger
By mid-August, if social distancing and mask-wearing habits wane, and the U.S. death toll has eclipsed 150,000, let the Republicans hold a raucous convention in North Carolina, while the Democrats have a semi-virtual and masked convention that befits the Time we’re in. And the choice will be made even clearer—between the mob and the rest of us.
Every indication is that this will not be a peaceful and regular transition of presidential power. Trump’s behavior over Memorial Day weekend made that perfectly obvious. He spent his time playing golf and spewing anger, attacking vote-by-mail, and laying the groundwork to deny the results of the upcoming election. And there is nothing he will not do.
This is a man who projects who he is onto others, calling them the names that he knows are his. When he repeatedly suggests that MSNBC host Joe Scarborough could be guilty of murder, Trump is telling us what he is capable of. Having shown absolutely no concern for the 100,000 lives already lost in the U.S. alone, there is no reason to believe that the thought of civil strife added to a health catastrophe would give him pause. After all, an August 9, 2016 NY Times headline read, “Donald Trump Suggests ‘Second Amendment People’ Could Act Against Hillary Clinton.” He is quite capable of suggesting his “Trump patriots” do the same around an election he is already calling rigged.
My mother once worked for a New York waterfront shipping company in the 1950’s. About the vermin in the area, she said that the warehouse cats were large, ferocious and overnight they would deposit a pile of dead rats to be picked up in the morning. However, she was told that when the cats chased a rat in a corner and the rat turned on them, the cat walked away. Donald Trump is our rat in the corner and walking away is not an option we have. That would be to give up on the country itself and make Trump a dictator like the ones he admires, and we his subjugated underlings in a white supremacist State.

And he has evil on his side. Every nation and terrorist, both foreign and domestic, will be working on his behalf. They know that for more years of Donald Trump will complete America’s downfall.
On the other hand, perhaps by November, when the death toll is surging past 200,000 while continuing Covid-19’s penetration of Trump strongholds, the voting landscape will change. When reality is grandma dying upstairs because there is no room at the hospital, then maybe his approval rating will fall below 40% and we will be rid of him and his Senate. Maybe.