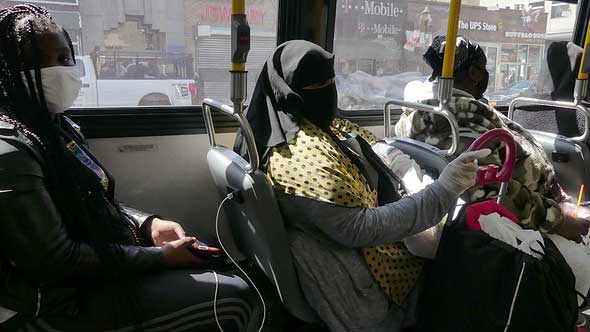 New Yorkers are trying to resume their normal lives, even as top public health officials warn of dangers. Easing restrictions on public life too soon during a pandemic could result in a surge of new cases that might spiral out of control, public health officials said. But a New York Times analysis of data found millions of Americans already were leaving their homes. With some states starting to open their economies, 25 million more people went outside their homes on an average day last week than during the preceding six weeks. Testifying before Congress, Dr. Anthony Fauci, the infectious disease expert, predicted dire consequences if the country opened too quickly, saying that the nation still lacked critical testing capacity and the ability to find the contacts of those infected with COVID-19. There is a real risk that you will trigger an outbreak that you may not be able to control, he said..May 12, 2020 (Credit Image: © John Marshall Mantel/ZUMA Wire)

From shopping carts and bodega doors to the White House, the virus is everywhere. And it will remain a lethal threat until a vaccine is developed and most of the population is vaccinated in one to two years. Until then, your life is in your own hands. And how you live it will determine how long it will be.
Setting aside for a moment, the pulsating knot in the stomach around issues of money, food and shelter, there is the need to survive to stand on the vaccination line, when this real-life horror film is brought to an end.

We are at war with COVID-19 and the first rule in war is, “Know your enemy.” This is a new virus, but thousands of researchers and laboratories around the world are accepting the challenge to learn something unknown before, and add it to the growing database about this threat that will remain a constant across all the continents.
What we do know is how it spreads—through microdroplets in the air and transference on surfaces. And we know how to deal with that: masks for the droplets and handwashing and sanitizer for the surface transfer.

We also know that the virus is deadliest on the elderly, and we know to keep them as isolated as possible and by everyone in the household limiting outside contacts, wearing masks and washing and sanitizing their hands.
What is also known is that it is hitting the African American and Latinx communities the hardest, and that is why those who resist wearing masks, should look at the company they keep with the confederate flags, MAGA hats and automatic weapons at the Michigan State Capital last month. They don’t want Black folks to wear masks either, they just want Black folks to die. When they scream “liberation,” they mean they want to be liberated from having to treat Black and Brown people as equals.

In the early reports, it was noticeable that many of those dying were heavyset Black people and now we know that was not just by chance. It was an accurate reflection of who, outside of nursing homes, were being hit hardest and why. All of the many factors that negatively affect the human body are prevalent in Black and Latinx communities. These comorbidities as they are called, are a constant theme in the Black community and now, more than ever, they have to be brought under control.
A year from now, when perhaps the firewall of cleanliness is breached and the viral attack is blunted by good health, your future self will thank you for the lifestyle changes made now.
Over 82,000 deaths and a new projection, based on the premature reopening of most states, is a death toll of 147,000 by August 4. Dr. Christopher Murray, Director institute for Health Metrics and Evaluation a researcher on the new model, says that even that projection depends on people maintaining masks and social distancing even as the states reopen.
And this is until just the first half of the summer and two months before the “Second Wave” of attacks that Dr. Anthony Fauci is certain will come in the fall. And even if these new projections hold steady, we’ll be headed into the deadliest flu season ever, reeling from at least 200,000 dead and at the height of the most consequential presidential election since the Founding of the Republic.

And we will have a Biden/Demings or Biden/Warren ticket going into November against a delusional sociopath in the White House who is obsessed with winning, regardless of norms, laws, and lives lost.
We can foresee refrigerated trailers as morgues scattered around the country, and foreign and domestic attacks on the presidential election on trump’s behalf grow in sophistication and volume. As we look at the possible future before us, we realize that as bad as things are now, the worst is yet to come. Get ready, get healthy. Stay focused.


Advertisement
Related Topics:
Up Next