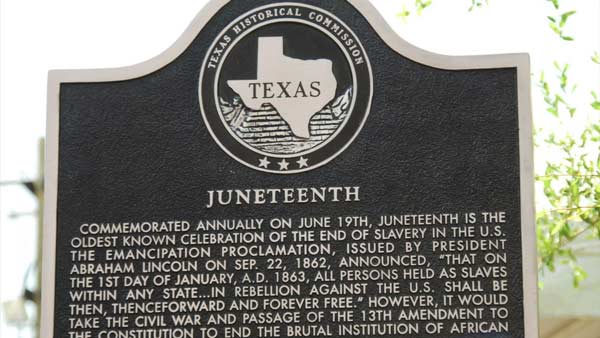 First, I’d like to thank the Weaving Social Justice committee for asking me to speak and be a part of your wonderful program celebrating Juneteenth, when the Africans held as slaves in Galverston, Texas, heard that the Civil War had ended and that they were free.
And I have to say, when I saw the script for today, and saw my name associated with “preaching” and “sermon,” a wave of panic swept over me and I had to say to myself, “Steady on young man, this is a church and they will be forgiving.”

Today’s theme, the importance of The Holy Wholeness of Unity, and the coming together of communities to help themselves, is especially relevant to the tumultuous time we are in.
And made even more so by The White House occupant holding a rally on Juneteenth in Tulsa, Oklahoma, where a white riot destroyed “Black Wall Street” and killed over 400 African Americans. He moved the date back, but his point had already been made. And I will return to him later.
I’d like to begin by noting the crises we’re in, followed by the briefest history of Black unity that has been practiced for survival, the current protests, the national leadership, and lastly, my hope for the future.
The nation is at the horrifying beginning of a pandemic where the number of deaths, as of today totaling over 114,000 in the US alone, could double by this September, and for all we know, double again by this time next year.
There is economic collapse, with over 44 million unemployed and the food bank next to my office has a line that stretches down the block and around the corner. People start lining up before 7am for the noon opening.
And now, unbelievably overlaying both, is the national and worldwide protests over the wanton killing of George Floyd, an African-American, by a white police officer pressing his knee on Mr. Floyd’s neck for 8 minutes and 46 seconds while three other officers, infected by the policing culture, stood and watched, just like the historical pictures of crowds of whites coming to watch a lynching and enjoy themselves.
The video of the casual killing tore the scab from the wound of racism that has never healed and held it in the face of the country so close that it could smell and be repelled by the pus as it revealed quite clearly what Africans in America have been enduring since being kidnapped and brought to these shores some 400 years ago.
In the middle of this, community self-help and the recognition of the necessity, and yes the holiness of unity, is seen as ever more important as the nation awakens to the understanding that the systems we are a part of have not been designed to help everyone and certainly not the least of these. And that is despite the best efforts of the divider-in-chief. But I said, I’d get to him later, and I will.
For now, I’d like to begin with how Africans-in-America have survived in this murderous culture by uniting among themselves, when not only was there no help coming from federal, state or local authorities, there was and is hard work being done against Black people in laws and regulations to, as Reverend Al Sharpton said at a memorial for Mr. Floyd, systematically keep a white knee on Black necks through all facets of society.

And yet, we rise.

At the 1890 Lake Mohonk Conference on “The Negro Question” Judge Albion Winegard Tourgee, spoke on behalf of the Negro and of what he personally observed as the Civil War ended.
“At the close of the war there were set free 5,000,000 of men, women, and children, without a husband, a wife, a lawful father, a legitimate child, or a legal family name among them all!
They were without homes, without money, without lands, tools, seeds, or stock, without education, without experience, without inheritance, without the impulse of generations of thrift and intelligence.
Yet, without a family name, except one of his own selection, with wages hardly one-third those of the agricultural laborer of the North, the Negro accomplished industrial results which must make any observer of facts who can lay aside prejudice and forget theories, utter, with profound amazement, those words first of all flashed through the electric wire, ‘What hath God wrought?’”
In answer, let me say that what God had wrought was an indomitable spirit and understanding to do what needed to be done.
It only takes a quick internet search to give light on how Africans came together and united to help themselves.

Baltimore Society for Relief
in Case of Seizure, 1830

That’s how it was done. In the middle of the horror of slavery, Africans came together in associations to support each other.
To provide health and life insurance. To provide, as has been noted, “care for the sick, burials for the dead, and support for widows and orphans.”
It was through self-help that they built their communities. And in doing so, provided examples of what could be done for all of society.
And yet, when breaking out of slavery, they were not alone. Others joined in, widening the community of support for enslaved Africans.
I speak about the Abolitionists, with many Brooklyn stops on the Underground Railroad including at Bridge Street Church, the Church of the Holy Trinity, and homes on Duffield Street.

One of the most surprising books I’ve read is a biography of Louisa May Alcott, the Woman Behind Little Women by Harriet Reisen. It must have been sent by a publisher, because frankly, I know I would not have picked it up on my own.

And that would have been my loss.

What I learned was that Ms. Alcott was an abolitionist and came from a family of abolitionists. She said she became an abolitionist at age three. And in Boston in 1830, when they would tar-and-feather abolitionists, that family must have had courage and deep commitment.
Reisen tells us that Alcott spoke of John Brown as a Saint and of being in Washington, DC, waving, laughing and cheering with the crowds of Africans and whites, when the Emancipation Proclamation was signed.
And I do not doubt for a moment, that Louisa May Alcott would have been in Washington again on June First of this year across from the house where Lincoln once lived, calling out George Floyd’s name and shouting Black Lives Matter.
She would also have been one of the marchers of mostly young white people I found myself among walking past the monument of Abolitionist Henry Ward Beecher on June 4th in downtown Brooklyn.
I’ve been in many marches since the picket line my mother took me to at a SUNY Downstate construction site, and when she took me to the March on Washington in 1963. At those times and others, I was always in the middle of crowds of Black folks.
What I saw at Cadman Plaza was complexioned more like the antiwar protests I’ve attended. Except here, it was in support of African Americans and against the ongoing police violence perpetrated against us. I think many at this service may have been there also.
Here the call-and-response was, “No Justice, No Peace!” and “Say his name, George Floyd!” And I have to say that I was at first startled to hear the chant “No Justice, No Peace” from the thousands of white people among the many races gathered. But in just a few moments, as the chants rolled on, it sounded like the beginning of that now much-used phrase, “a new normal.”
And for the last two weeks, this has been happening in cities across the country and around the world. And I believe there is promise in that.
Africans in the Americas have always been united in dragging America, kicking and screaming, step-by-step into the humanity expressed in the Constitution, but that was not here when this country was born in the genocide of the indigenous people, the robbery of their land, and the enslavement of Africans to build, clothe and feed the new nation.
What we’ve seen in the weeks since Mr. Floyd’s murder is a coming together around issues of police brutality against African Americans, and I hope it grows into a uniting around solving issues of the systemic racism on which this Republic was founded and that continues to permeate the culture today.
But resistance to a racially unified nation is a constant. That was made clear by blatant suppression of the Black vote, most glaringly seen in Georgia’s Tuesday Primary where people, Black and white but mostly at Black polling sites waited in lines for three to five hours.
Which brings me back to that man at 1600 Pennsylvania Avenue. His is truly a malignant presence. He is the antithesis of today’s theme.
There is nothing Holy about him and he is not a whole man. The elements of empathy, conscious and morality have been left out.
Now we know God doesn’t make mistakes, and maybe this is Her or His way, to finally bring us together; if so, it looks like it’s working.
The rally he’s holding in Tulsa will be populated by his faithful. A mostly unmasked hoard, proudly waving the confederate flag over the graves of Black people. And it will be made even clearer who he is and who they are.
There are no words left to describe him. As my mother would say, “He has already been called everything but a child of God.”
And he will stop at nothing to stay in power.
It is my belief that if something goes awry with the coming national election, a distinct and unprecedented possibility, what we’ve seen these past few days will only be warning tremors to the earthquake that will follow.
And if it should come to that, I believe millions will rise up, uniting around the Constitution until he is removed from the White House, preferably with his hands zip-tied behind his back, and perp-walked to the helicopter to take him away from us. But that is just wishful thinking and enough said.
If ever there was a time to unite around the recognition of a common God-given humanity, it is now.
And as long as we remain stalwart, self-examining, and recognize the holiness that can be found in unity across the races, then we will overcome what we were, and move on to what we were supposed to be, “One nation, under God, with liberty and justice for all.”
Thank you for this opportunity and May God Bless You.

There is so much going on, it is difficult not to feel overloaded.