The Black Vote: More Important Than Ever
Advertisement 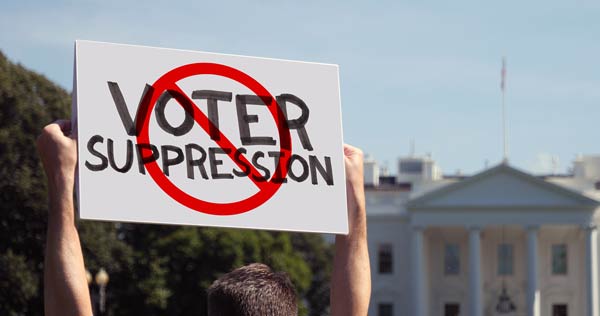 Hunger strikers for voting rights arrested at the US Capitol January 18, 2022, Washington, DC: Joseline Garcia (center), co-founder of UN-PAC awaits arrest with faith leaders and other students on hunger strike for sitting on the steps of the Senate chamber at the US Capitol in a civil disobedience action for voting rights. They are demanding passage of the John Lewis Voting Rights Advancement Act to protect the right to vote. This is a result of the passage of voting restriction laws in 19 states within the last year. (Credit Image: © Allison Bailey/NurPhoto via ZUMA Press)

The View From Here
By David Mark Greaves
What is going on? War in Europe with millions of refugees, famine in Somalia with 350,000 children projected to die, the United States threatened to be ruled by autocrats, the climate crisis is quickening, and the manipulation of information through the internet is fragmenting American consciousness into its sometimes ugly parts. And suppression of the Black vote is threatening to make it all worse.

An authoritarian state in the United States would bring back to power the same strain of mankind who so successful during slavery as the planters, overseers, buyers and sellers of people. Men, so aware of their nature, that today they ban books where people might learn what their ilk has done and what they are capable of.

These are the people who would be coming to power. Men like Donald Trump who called Putin’s invasion, “genius”. For him, Putin’s disregard for human life and lust for power is recognized and is to be admired. Game knows game.

Putin’s biggest problem with the war in Ukraine is the United States. He needs regime change here to give his campaign a boost. And working to suppress the Black vote as he’s done in the past, this time for the midterm elections, must be part of Putin’s strategy headed into November. His misinformation teams of cyber, political and social influencers will have the advantage of working at a time when a major political party has the same goal, to transform the United States into an authoritarian state. If Putin can achieve that, then the future brightens for him, with representatives from the “Putin wing” of the Republican party holding House committee chairs.

If the thought of a Republican led House, Senate and Executive branches of government doesn’t make the skin crawl, then you have to pay closer attention.

If the Republicans win both houses in the Fall, they will put the country in a holding pattern while states continue to degrade voting rights and put Trumpers in the election-decision making loop. Then in 2024 they will install an electoral college president, no matter how many fewer popular votes they received. It could be Trump, Florida’s Gov. Ron. DeSantis, or a person now unknown. Whichever way, it will bring a very different time to America.

What were we thinking when we let it come this far? This slipping away of democracy and risking the worst of America to come power. And once the white supremacists and demagogues, backed by the mob that is the Republican base, grab that power, they will not give it back.

If the country is to be saved, the Democrats better figure this out. Not only for the nation’s sake, but the world as well. With climate change deniers in office, we are going to go from bad to worse with drought, famine, flooding, storms, wildfires, mass migrations, extinctions, and more impacts of a changing climate than we can count. All of it met with the response from autocrats to whom humanity and the future is not their concern.

Which brings us back to the importance of the Black vote.
The history of Africans in the Americas is one of constant struggle against evil. Whether it was the enslavers, the lynchers, or the racism and hate, it has been our constant struggle against all of it that has made the Declaration of Independence and Constitution, written originally by and for white male landowners, applicable to all persons and lit the beacon that is looked to around the world.

And now here we are again. Fighting the resources and relentless evils of racism, power and greed. Again, with implications across the planet. We are holding the future of democracy and the future of the world in our hands when we vote.

And the new slavery won’t need metal chains. We need to remember that and spread the word to vote and financially support candidates in competitive races like Rep. Val Demings in her Florida Senate race and Senator Ralph Warnock trying to hold on to his office. That’s one of the practical things we can do from the safely blue borough of Brooklyn.