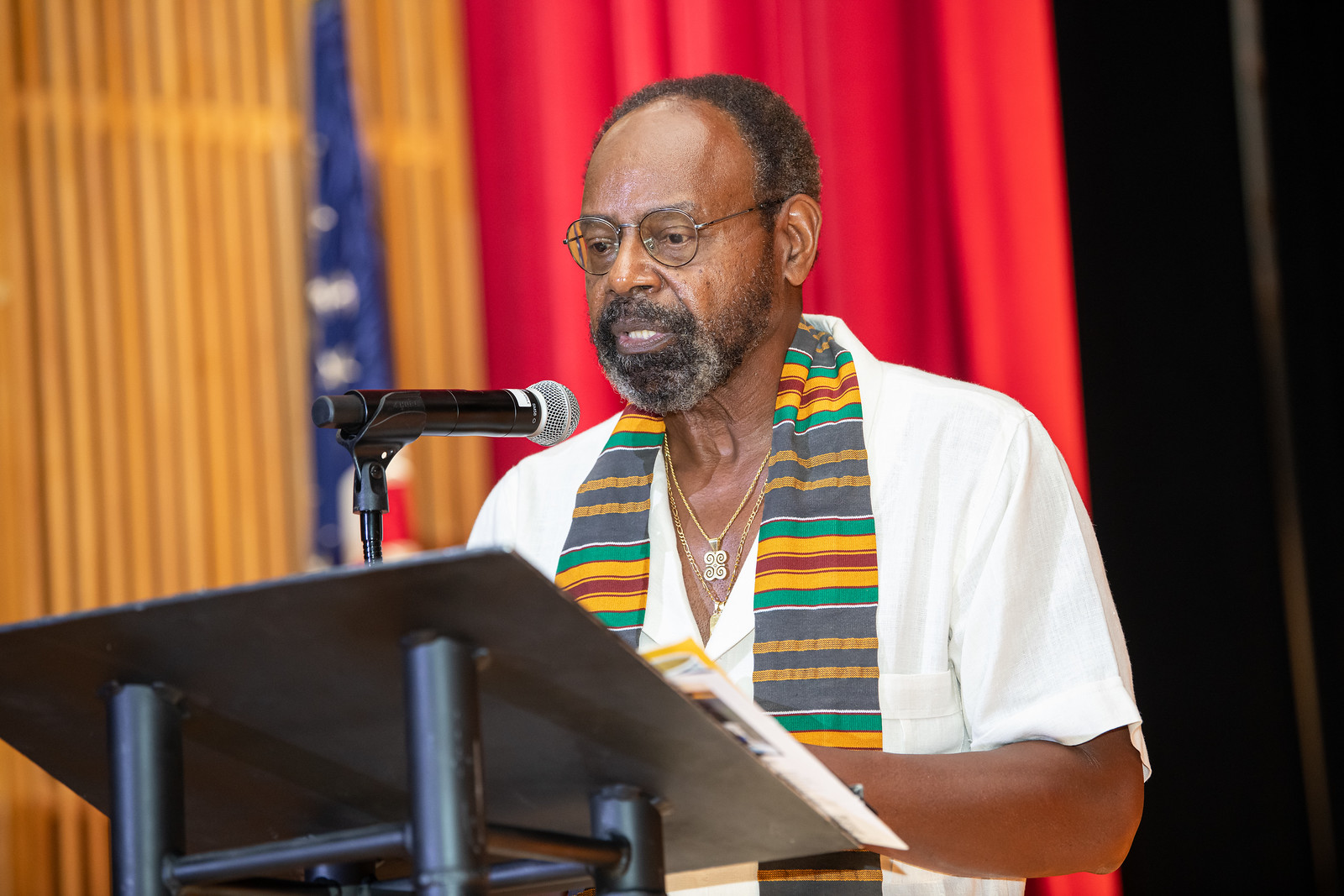 (Below are Excerpts from His Closing Remarks at the August 12 Memorial Tribute.)

…  Al Vann was a living legend who embodied the full spectrum of a Servant Leader, a gentleman; a strong and purposeful leader and activist; and above all, a dedicated family man. He loved his family, Mildred or Cookie, as he called her, a mother whose unyielding support for Al was constant throughout the years as he served the community, the state, the city, and the country. She was his “Rock,” as someone pointed out — sewing his Dashikis in the 60s, nurturing the children as they grew up; being a model teacher in her own right, with many former students singing her praises; and being the sturdy foundation at home that allowed him the peace and strength to deliver for All of us. We thank you, Cookie, for sharing the many hours, days, months, and years.

And what can be said of the children, three daughters, his son, six grandchildren, and one great-grandchild? Their abounding love and his love can be summed up as forever bountiful. Each birthday, each graduation, each wedding, each Kwanzaa, each important milestone, and even when some events were not so important, he would show up and make them special. They have loved him dearly, not as the Icon we know him as, but as Dad, Daddy, Granddad, Pop, etc.   This truly loving and nurturing family was anchored by a father whose commitment enabled all of them to blossom and made him forever proud.

On a personal level, Al Vann, for me, was a spiritual big brother, mentor, leader, and a deeply coveted friend. When I think of him, I am reminded of words from the first Black President of South Africa, Nelson Mandela, who spent 27 years in prison as a result of his leadership in the fight against apartheid, a fight that Al joined by leading New York State Assembly’s disinvestment movement from South Africa. Nelson Mandela told us, “What counts in life is not the mere fact that we have lived.  It is what difference we have made in the lives of others that will determine the significance of the life we lead.” And Vann’s constant refrain familiar to many of us in the early struggles was: “Is What We Do in the Best Interests of Our People.”

Leader Vann embodied this poignant message through his life’s work. He was devoted to making a difference in the lives of students he taught, teachers he led, government, civic and educational leaders he collaborated with the staff he mentored, elected officials with whom he worked, community members whom he inspired, and institutions he built or was instrumental in creating and sustaining.

Many examples have been shared of his leadership, vision, and purposeful and graceful approach to heightening the quality of life for our community. When he entered a room, his presence exalted a calming power.  People were motivated to listen when he spoke, for his message was always clear and purposeful. He focused on community empowerment, self-determination, educational excellence, political and civic engagement, and developing the strategies and initiatives to unify and strengthen our communities. His transformative and visionary leadership helped to shape policy and effect change in our community, city, and state.  The co-naming of Fulton Street as Harriet Ross Tubman Avenue and New York State’s recognition of Harriet Tubman Day exemplifies a recognition of this vision.

And let us not forget that as a founder of Medgar Evers College, he supported and worked with its Presidents and elected officials to ensure that it remained a vital institution of higher education for our students.  Also dear to his heart was Boys and Girls High School. He was close to the late Frank Mickens, a strong principal and visionary leader who transformed Boys and Girls HS.  When Mickens passed in 2009, he worked with the school leadership to help restore it as a significant historical landmark and educational institution in Bedford Stuyvesant.  In 2013, Boys and Girls paid tribute to Vann by renaming its library in his honor.

During these last several years, and most recently over the last several weeks before he transitioned to the Ancestral Realm, I spent the most significant time of my life with him. While his body continually weakened, his spirits remained high, and his joy of family and their successes and achievement sustained him.  He shared stories that reflected his goals for the past, present, and future and how he had attempted to make a difference.

A recurring message he focused on was the importance of Community Empowerment and the need for the current leadership to coalesce and make a difference. At the same time, there was an opportunity to make a sea change in this city and state.  He underscored the convergence of Black political power at the city and state levels. He reiterated that this is a time when Black elected officials should take the lead in bringing progressive community and civic parties together to develop a proactive agenda, one that would address issues such as civic engagement, political representation, social injustice, economic equality, housing inequality, and education inequity in our community and city. And he had a sense of pride knowing that our vision for community empowerment did, in part, contribute to the extraordinary aggregation of African Diasporic political power that we can witness and celebrate in New York State today.

The often used African proverb: “It takes a village …” is most appropriate in describing this celebration of the life of Dr. Al Vann.  It has brought the village together to commemorate our fearless leader.

Thriving is Our Nature