A Sincere Farewell to our Vanguard
Advertisement 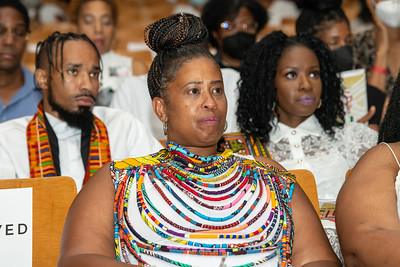 On a warm Saturday in August, tempered by an ancestral breeze, the cultural, political, and residential histories of Central Brooklyn convened at the center of it all to say farewell to our Vanguard. In the shadow of the community development organization*, he helped raise, in the neighborhood that he served at every possible level – from educator to elected official – this forest celebrated our very own Baobab Tree, the Honorable Albert Vann.

Our amazing Attorney General Letitia James arrived more than an hour before the event began, something almost unheard of for someone of her stature and esteem. She helped elders to their seats and set the example of the energy we were to reflect – love, consideration, purpose.

Binta Vann was regal, steady in her management of the moment, and kind and gentle to everyone who approached to give her condolences in the form of hugs and praise.

The Hon. Annette Robinson was measured and nurturing, always our North Star. Marilyn Reid wore her marigold Brownstoners t-shirt and moved through the crowd as her son DJ Trauma played music that fed our soul.

Assemblymember Stefani Zinerman wore a technicolor dream coat and laughed with Renee Gregory near the vendor marketplace. Stan Parham used his phone like a professional camera, coupling together unique permutations of people for pictures.

Laurie Cumbo, event host, was, as always, the grand connector, eloquent and festive. Segun Shabaka watched with intent from the sidewalk while in a meaningful conversation with Richard Green.

The children of Ifetayo electrified the stage with movement and colors. Rome Neal danced in front of the stage with everyone who walked past. Rhonda Scott was there, wearing a beautifully flowing sunshine yellow dress. I hadn’t seen her since we were kids. In his baby blue Kangol, Eddie Frazier told jokes in the street and then went on the stage and slapped them drum skins like the legend we know him to be. Then came Steve Cromity, summer brim tilted just like a Brooklyn guy would wear it, his voice laying as smooth as velvet over the crowd. George Johnson was coolin’ under the tent, smiling and waving at those who passed. Hollis King snapped pictures of the performers, understanding the history taking place. Dee Bailey was holding court on the far side of the stage, her smile bright and confident.

Public Advocate Jumaane Williams shared family stories with Congressman Hakeem Jeffries. Kenesha Traynham-Cooper and Tremaine Wright stood in front of TD Bank joking with Tai Allen. Sewaa Codrington sat quietly behind an ornate face mask. And, where names could not be remembered, faces were. An elder that used to attend church with my grandmother was there. He sat pensively under the tent. I saw him kiss his hand and touch the face of Al Vann on his t-shirt. This convening resembled every community get-together I’ve attended over the last 40 years.

And that’s what made Saturday’s celebration for Al Vann so poignant. He believed and said aloud numerous times that no one person accomplishes anything. Accomplishment is a group effort. And many of the amazing accolades our Vanguard accomplished over time – he did so with this group, this forest, this compilation of committed minds and souls. Soldiers, for the community. Leaders, for family.

For four hours last Saturday, I was honored to be standing in the middle of my community as they celebrated our Beloved by simply being the best of who they are, each and every one of them.

And that’s all we’ve ever needed.

*(The Honorable Albert Vann was a founding board member of Bedford Stuyvesant Restoration Corporation.)

Advertisement
Related Topics:al vann
Up Next