Thriving is Our Nature
Advertisement 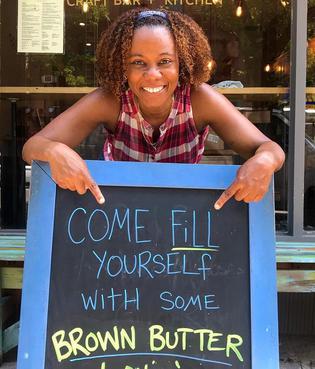 What was most striking about visiting the TAMA Sunday street festival last weekend (Tompkins Avenue between Gates and Halsey www.tamabedstuy.com) was the vibrancy, energy, intelligence, and spirit of the mostly young African American business owners.  The future they gave promise to was brightened by their presence.  These young people confirmed that there are no limits to what is possible with opportunity.  That spirit to thrive is bone deep with origins before the Middle Passage and rebirth after Emancipation.

Just as the James Webb Deep Space telescope is allowing us to look back in time toward where the universe began to understand better where we are now, the following June of 1890 presentation by Judge Albion Tourgee at the First Mohonk Conference on the Negro Question gives insight into where the nation is now.  Judge Tourgee, at the all-white conference to speak on behalf of the formerly enslaved Africans, makes plain that innate intelligence, abilities, and instinct to thrive, displayed as they were released from bondage, and shows the roots of the horrors of Reconstruction, Jim Crow, the January 6 Insurrection and the unremitting anger of the Republican base. DMG

Judge Tourgee. — So much has been said this morning about the industrial deficiencies of the colored people of the South that I have been greatly surprised at the omission of any reference to the other side of the question — their industrial excellences. I have always been less impressed with the industrial needs of the colored man than his industrial achievements. From 1865 until 1880, I had a peculiarly good opportunity for observing his qualities as an agricultural and mechanical laborer, having first and last had some hundreds in my employ, and during much of the time each year traveling in different parts of the State in which I then lived.

As a result of constant study of their conditions since emancipation, I do not hesitate to say that the colored people of the South have accomplished more in twenty-five years, from an industrial point of view, than any people on the face of the earth ever before achieved under anything like

The manner in which they live and the things they do not do have been alluded to here as if they were racial qualities, and not fortuitous, resulting conditions. I was much impressed with the suggestions of more than one who has spoken, as to what they should be taught to do, as if they were industrial babes. I would like to see any of their advisers give the colored man lessons in the management of a mule, or teach him to raise a crop of corn or cotton or tobacco, or work a bad hillside at the South. In those forms of industry which they have had an opportunity to acquire, they have shown an aptitude and success which are simply amazing, when we consider their previous lack of opportunity to learn management, thrift, and economy. The Northern man is always prompt to criticize their agricultural methods; yet the Northern farmer who goes South and relies upon his own judgment and his own labor is very generally a failure.

So, too, in comparison with the ” poor whites ” of the South, the landless cropper-class, it is unquestionable that the Negro has excelled them greatly in industrial progress since his emancipation. In five of the heaviest cotton-growing counties of five States of the South, it is estimated that from four to six percent, of the heads of families among colored people live now under their own roof-trees. In the regions where agriculture is more varied, the proportion is much greater. Probably six percent, is a fair average. Now, if, under the conditions prevailing in 1865, two in a thousand had housed themselves in twenty-five years, it would have been regarded, by the observant political economist, as nothing short of an industrial miracle. I have no doubt that five times as large a proportion of them have become home-owners and self-employers as of the ” poor whites,” who most nearly approach them in educational and financial

conditions, and with whom alone they can be justly compared.

Indeed, they already stand above the average of the white race in some industrial conditions. There is only half as large a percentage of paupers among them as among the whites of the eight States of the ” black belt ” of the South, and the proportion of paupers among the whites of the South is much less than at the North. It has been claimed that the reason of this is that the old masters support the aged and infirm who have been slaves. No doubt, this is sometimes true;

but, even in slave times, it required special statutes in every Southern State to prevent the masters from abandoning such infirm slaves to live by their own devices, and it is not reasonable to suppose that the white man would support the infirm freedman and send the disabled ones of his own race to the poorhouse. It is simply a remarkable economic fact which establishes beyond controversy the remarkable economic value of the colored man as an industrial element of American life.

Something has been said about the frequent absence of the surname among the Negroes of the South. In ” Bricks without Straw,” I fully discussed the cause and character of this, to us of the North, singular feature of the freedman’s character. It is a terrible unconscious testimony against the treatment American Christianity has accorded our “brother in black.” It was natural that the freedman should be a little lax in the matter of names. The slave had never been allowed a surname,— could not have one, indeed, because he had no father. The law expressly forbade it. He was always a nulliusfilius and was indicted, tried, and hanged simply as Jim or John.

And it must be remembered that indictment and trial was the only legal privilege the slave enjoyed. He could be hanged, but could not be married, and his master changed his name as often as he chose.

Why should not this man, new-born to self-control, make some experiments in nomenclature? He was a good way behind us, who have been fooling with our names for centuries, and have not always gotten them entirely satisfactory even yet. This is not a racial peculiarity, but an eternal testimony against injustice.

At the close of the war there were set free 5,000,000 of men, women, and children, without a husband, a wife, a lawful father, a legitimate child, or a legal family name among them all! They were without homes, without money, without lands, tools, seeds, or stock, without education, without experience, without inheritance, without the impulse of generations of thrift and intelligence.

Yet, without a family name, except one of his own selection, with wages hardly one-third those of the agricultural laborer of the North, the Negro accomplished industrial results which must make any observer of facts who can lay aside prejudice and forget theories, utter, with profound amazement, those words first of all flashed through the electric wire, “What hath God-wrought!