In the Spirit of Tubman: Reflections & A Call
Advertisement 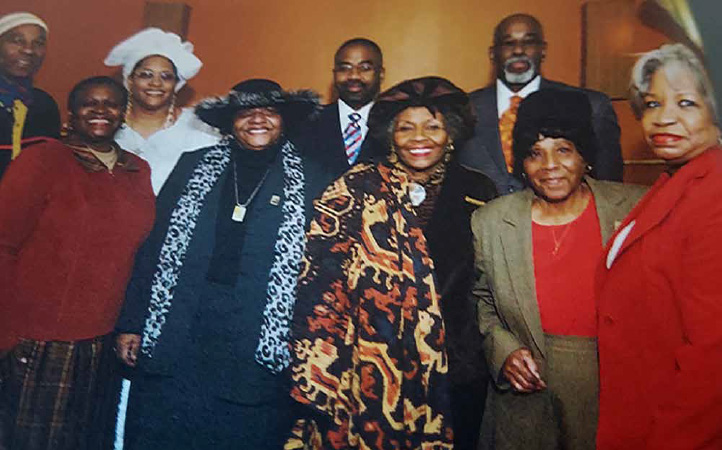 The pioneers of the 2004 co-naming of Fulton Street in Brooklyn, NY, Harriet Ross Tubman Avenue, included: first row, the Honorable Annette Robinson; Ms. Geraldine Daniels, a descendant of Ms. Tubman -- the most revered of all abolitionists and Underground Railroad conductors; Dr. Adelaide B. Sanford; Ms. Roberta Greenlea, a Tubman descendant; and recurring OTP contributor Elizabeth Rankin-Fulcher, who is chair of the Black Women’s Leadership Caucus; and second row, the artist Lorenzo Pace; Peekskill-based entrepreneur and BWLC member Fern Joseph; Walter Shay, Vice President, Con Edison; and community organizer/activist Al Vann, then a NYC Councilman. Ms. Rankin-Fulcher points out in the story below that the community should heed Vann’s persistent “Call to Action” because the work on this effort is far from over and did not end with his death in July. Ms. Daniels and Ms. Greenlea are now deceased. Not pictured but attending the event in Bedford-Stuyvesant was the famed abolitionist’s great-grandniece Pauline Copes Johnson (inset), now 95, who lives in Auburn, NY, Ms. Tubman’s home and resting place until her death in 1913.

I was introduced to then NYC Councilman Al Vann (I rarely called him Al) more than 20 years ago by the late Frederick B. Laverpool (President of “Braggin’ About Brooklyn,” which company heralded the many contributions African Americans made in the development of Brooklyn) and Abubadika Sonny Carson (cofounder of the Committee to Honor Black Heroes).  Messrs. Laverpool and Carson recruited the black Women’s Leadership Caucus, Inc. (“BWLC”) to work on their project to co-name Fulton Street “Harriet Ross Tubman Avenue.” I was immediately impressed by Mr. Vann’s eagerness and commitment to sponsor legislation for the street co-naming project.

Whether a co-naming application is processed and approved or not, within a few weeks, our project took three years due to quite a bit of resistance.  Mr. Vann, NYS Senator Velmanette Montgomery, NYS Assemblywoman Annette Robinson, and Councilman James Davis were our “angels,” guiding us along our journey – never wavering in their support.

The legislation was passed and signed in 2004, and on March 10, 2005, at the corner of Classon Avenue, Councilman Vann hosted the unveiling of the “Harriet Ross Tubman Avenue” signage.  In attendance were three descendants of Harriet Tubman who traveled from their homes in Auburn and Rochester, New York, compliments of Mr. Vann.

However, Mr. Vann’s great work is not completed. While the co-naming of Harriet Ross Tubman Avenue runs from Boerum Place to Rockaway Boulevard, the Department of Transportation offered a mere 13 signs, which we strategically placed throughout the four community boards covering those neighborhoods.

Did you know that in 1945 the entire corridor of Sixth Avenue in Manhattan was co-named Avenue of Americas?  Did you also know that Robert Fulton never brought his steamboat to our beloved Brooklyn? At the same time, Harriet Tubman spoke several times at churches in Brooklyn, well-documented, most notably in “The Brooklyn Eagle.”   So, who is more deserving of having their name identified on this major thoroughfare in our beloved borough of Brooklyn?

I am proud that the Black Women’s Leadership Caucus continues the work we began nearly 20 years ago with Mr. Vann, Mr. Liverpool, Mr. Carson, and others.

On August 26, 2003, then Governor Pataki signed legislation designating March 10, “Harriet Tubman Day of Commemoration,” to be celebrated annually.  BWLC traveled around the state campaigning for this legislation under the leadership of Assemblyman Arthur Eve.  Since 2008, BWLC has continued honoring Harriet Tubman every March 10 at 10 am, hosting a public wreath-laying ceremony at the Swing Low: Harriet Tubman Memorial standing tall at 122nd Street, Harriet Tubman Square at Frederick Douglass Boulevard.  This beautiful Memorial was created by Alison Saar.

Also, BWLC collaborates on various Tubman projects with the National Park Service; we traveled to Ghana with three Tubman descendants to place a statue created by a Ghanaian artist in Ghana’s Botanical Gardens. And we continue to encourage merchants along Harriet Tubman Ross Avenue thoroughfare to change their address to reflect the co-name of Harriet Ross Tubman Avenue.  With community support, we can get this done.

So why, in Bedford Stuyvesant, our institutions like Restoration Corporation – cofounded by Vann; and other institutions and all the merchants along Harriet Ross Tubman Avenue do not celebrate American History’s First Lady by honoring her name?

Throughout his career, Mr. Vann stood up for us, our families, and the education of our children. He was a team player, loyal to our community in his service as our Councilman and Assemblyman; he was our neighbor.  Let’s stand up for Honorable Albert Vann and the Honorable Harriet Tubman – let’s honor them by continuing and finishing the work they began a century apart.

Tomorrow can and will be better if we work together to make it so.  Brooklyn, we’re counting on you because Mr. Vann and Harriett Tubman counted on us.