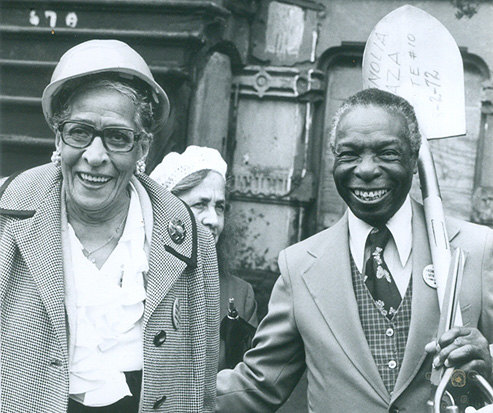 This April Earth Month and on the 150th anniversary of Arbor Day, next Friday, April 29, Our Time Press salutes Hattie Carthan (1901 –1984) and Herbert Von King (1914-1996). Ms. Carthan, founder of the Magnolia Tree Earth Center of Bedford Stuyvesant (MTEC), is considered Brooklyn’s First Lady of Tree Education. MTEC, located at 677-679 Lafayette Avenue, is the protector of New York City’s only Living Landmark, the 40ft. tall Magnolia Grandiflora. Directly across the street from the Center is the 7.8-acre Herbert Von King Park, named for the late “Mayor of Bedford-Stuyvesant”.

Ms. Carthan and Mr. King, seen in this picture taken in 1978, served their Brooklyn community for nearly a combined 100 years of active community leadership: he, in politics and business, and she, as an advocate for urban ecology awareness. Both community icons were instrumental in the planting of 1,500 trees in the Bed-Stuy area, and dozens of gardens in former vacant lots before the advent of the national urban green awareness and beautification movements.