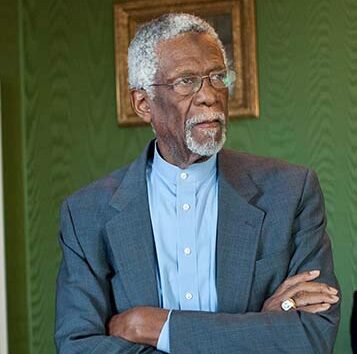 Bill Russell waits in the Green Room of the White House before receiving the 2010 Presidential Medal of Freedom. Creator: Pete Souza | Credit: The White House

What was it about Bill Russell that made him special?
He was a happy guy, but at the same time he was very serious about equality, about self-respect, respect of others and respect for his race. He was a trailblazer. In terms of him coming into the league as one of the top draftees to go to Boston at a time it was uncomfortable for people of color. For him to go there and change the attitude of many people in that state of Massachusetts.

Along side that, he was courageous, he was bold and set a new paradigm in the game of basketball that lasts to this day and beyond. I can say that he was a good friend, I’ll always remember his radiant laugh. When I introduced Blaine [Robinson], to him he was mad as hell at me. I said, “What you mad at me about Bill?” He said, “because I didn’t think to do what you did in Mexico City. I should have thought of that first.” Quite naturally we laughed about that, and I said well, we were in the same boat. So, as I drop, I drop for you as well. And anything you drop; you drop for me as well. What I dropped in Mexico City was for you as well as me. And all people of color.
We’re in the same boat in terms of the statements he made and what he stood for. And fought for. Which is the same thing I’m standing and fighting for.
I think we inspired a lot of young individuals to be successful in the sport they’re involved in. We want them to know that sport is a steppingstone in life. It gives you the opportunity to go in a lot of different directions.

If you succeed in sports, you can’t forget where you came from. If you were fortunate and blessed to get out of the environment in which you were born, do you totally get out if those you left behind are still suffering? I think not.
That’s the great thing about Bill Russell, Muhammad Ali, Jackie Robinson, Paul Robeson, Curt Flood. Bill’s in line with so many others like them who need to have more recognition.

Impact of Dr. Albert Vann
in Brooklyn and Beyond