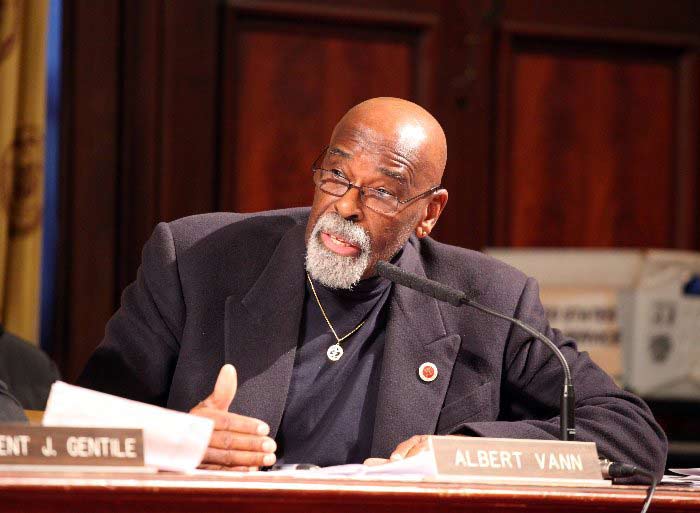 “He got things done! Not an easy task!”

OTP: Judge Wooten, what role did you play in Dr. Albert Vann’s life?
Justice Paul Wooten: I have had the privilege of working with and for the Honorable Al Vann for over 4 decades. I started with Al in 1980 as his legislative counsel then moved on to become his chief of staff. I also served as counsel to the Black & Puerto Rican Legislative Caucus, which he chaired from 1978-1984; and, counsel to the New York State Assembly Committee on Children and Families, when he was chair. As his legislative counsel, I researched and assisted in the documentation of his education agenda when he was the Ranking Majority Member of the Education Committee.
Over the years, I also served as his campaign attorney, campaign manager, and personal counsel. All roles which garnered mutual respect and trust that led to a powerful friendship.

OTP: What was it like to work with him? What kind of leader was he?
JPW: It was like being enrolled in a post graduate degree program in Community Development led by a distinguished professor.Vann was a progressive visionary who got things done. He had the ability to bring people together.
When he chaired the Black & Puerto Rican Caucus, and chaired the Committee on Children and Families, he brought accomplished leaders together from across the state to work to enact laws, create programs and build systems that still benefit women and minorities. He understood that benefitting woman and minorities benefited everyone.
During his tenure, he worked closely with Deputy Speaker of the Assembly, Arthur Eve, from Buffalo; Manhattan’s County Leader Herman Denny Farrell, who served as Chair of the Assembly Banking and Ways and Means Committees; Jose Serrano, from the South Bronx who served as chair of the Assembly Committee on Consumer Affairs and the Committee on Education – Serrano went on to become a Congressman; and, East Harlem’s Angelo Del Toro, who served as chair of the Social Service. Del Toro was the 1st Puerto Rican chairperson of the Caucus. Vann and these learned, committed scholars added to my education on what was necessary to elevate a community.
Vann united the political leaders in Central Brooklyn around common issues.He put together coalitions of leaders who worked with him and got things done. Each of these leaders were superstars on their own, but united they were invincible. Among those leaders were Congressman Major R. Owens, Senator Velmanette Montgomery, Assembly Members Clarence Norman, Frank Boyland, Roger Green, Annette Robinson, and numerous ministers.
Vann’s ability to coalesce people became more widely evident when he served as Chairman of New Yorkers for Jesse Jackson for President in 1984; co-chair of the New York State Democratic Party at the 1984 Democratic National Convention; Chair of the Brooklyn-based Coalition for Community Empowerment; chair and founder of Coalition for a Just New York’ and Chair of the Brooklyn Community Empowerment Convention.
This was an incredible experience that helped prepare me for who I am today.

OTP: What was the essence of Vann’s education agenda?
JPW: Vann was an educator before he was a politician. He understood that education was the ticket out of poverty. And, he focused his agenda on legislation and advocacy to ensure superior education opportunities for people of color. One key strategy of his agenda was to advocate for the appointment of highly qualified people of color to high-level decision making positions throughout the state education system.
Like I said previously, Al got things done! When he was the ranking majority member of the Committee on Education, he fought for Dr. Adelaide Sanford, the Black scholar, to be appointed to the SUNY Board of Regents. When he proposed her appointment, many thought her appointment impossible. But his leadership ability and political mastery was awesome and she was appointed. This eventually led to Dr. Lester W. Young’s appointment to the Board some years later and Dr. Irving Spear Hamer Jr.’s appointment as deputy commissioner of The New York State Education Department.
People may not recall that he was also responsible, in part, for the first Black New York City Schools Chancellor.
In 1987, when Chancellor Nathan Quinones resigned from the New York City Board of Education, Mayor Koch supported Robert Wagner for the position. But under specific New York State educational requirements, Wagner lacked the educational background to be the City Chancellor and he needed an exemption from the Commissioner of the State Board of Education to move forward.
Wagner didn’t get the exemption, because Vann – who was the ranking majority member of the Assembly Committee on Education – used his powers to file an opposition to Wagner’s request. Dr. Richard R. Green went on to become the first Black Chancellor.
That’s how Vann worked: behind the scenes.

OTP: What will be Dr. Vann’s Legacy?
JPW: While I cannot forecast what it will be, I can say what I believe most people will remember him for and what I think should be his Legacy.
I believe most people will credit him with the founding of Medgar Evers College. In 1968, prior to Vann becoming a legislator, CUNY announced plans to create a community college in central Brooklyn. In response, community-based organizations and leaders began pressuring CUNY for a seat at the table when decisions regarding the structure and operation of the school were made. Vann, at that time was the president of the Bedford Stuyvesant Coalition. He was able to unite these groups into a steering committee representing Central Brooklyn which negotiated a memorandum of agreement with CUNY which gave them rights to participate in the selection of the president and final approval on the appointment. They also, under Vann’s leadership, were able to upgrade the school from a two-year college to a four-year college, offering baccalaureate degrees.

Of course, I agree this should be part of his legacy. But there are two other landmark pieces of legislature, impacting all of New York, which I believe are significant. I doubt if most people know the role, he played in establishing the New York State Minority and Women-owned Business (MWBE) program into law; and, the role he played in having New York included in the Voters Right Act.

When Vann was chair of the caucus, he learned that it was virtually impossible for a minority -owned businesses to get contracts with any of the state agencies unless they were willing to be subcontractors to an established business.
As a result, Vann shepherded the senators and assembly members of the caucus into co-sponsoring bills and advocating for a functional MWBE program. In 1988, the results of these efforts became Executive Law 15A which was reauthorized in 2019. This law is one of the most progressive laws supporting minority and women-owned businesses. This statue required the establishment of the Division of Minority and Women-owned Business Division. The division is charged with establishing employment and business opportunities MWBEs. It addresses fairness and parity in contracts and employment. And, under the statute, every agency is required to establish participation goals for MWBEs.

Governor Kathy Hochul announced that MWBEs received 30.5% of state contracts during the 2020- 21 fiscal year — the highest in the country. This was estimated to have a value of more than $3 billion.

Vann’s visions continued to expand. In the 1970’s, the state NAACP – not the NAACP Legal Defense Fund – made an application to show that New York State, specifically Brooklyn, Manhattan and the Bronx, had a history of racial discrimination in voting practices. Therefore, those areas were later designated as Section 5 geographic areas under the Voting Rights Act. As a result of that action and, by extension, New York became the only non-southern area covered by the act.

However, no action was taken on behalf of New York until June 16, 1981 when Vann, on behalf of the Black and Puerto Rican Legislative Caucus, sponsored the lawsuit that involved a black Brooklyn voter, Melville Herron. Mr. Herron filed a federal lawsuit claiming that New York City’s proposed redistricting changes violated the Voter’s Rights Act. As attorney for the Caucus, I was assigned to be the lead attorney representing Herron before a three-judge court that included the Honorable Thurgood Marshall. I was joined by Attorney Esmeralda Simmons, who was the Director of the Center for Law and Justice – another phenomenal Vann generated experience.

The plaintiffs won the case. The1981 municipal elections were postponed until 1982. The city council-at-large-seats were declared unconstitutional and the remaining 33 seats were redistricted to two seats reflective of the city’s minority population. On the congressional level, minority representation went from three representatives to five: two in Brooklyn; and one each in Manhattan, the Bronx and Queens. As I said, Vann got things done.

OTP: Thank you, Justice Wooten.
JPW: Thank you for the opportunity to reveal this side of Al Vann, the politician and the man.