Lake Chad Is Drying Up. Meet the Nigerian Activist Fighting to Save the Lake and Its People
Advertisement 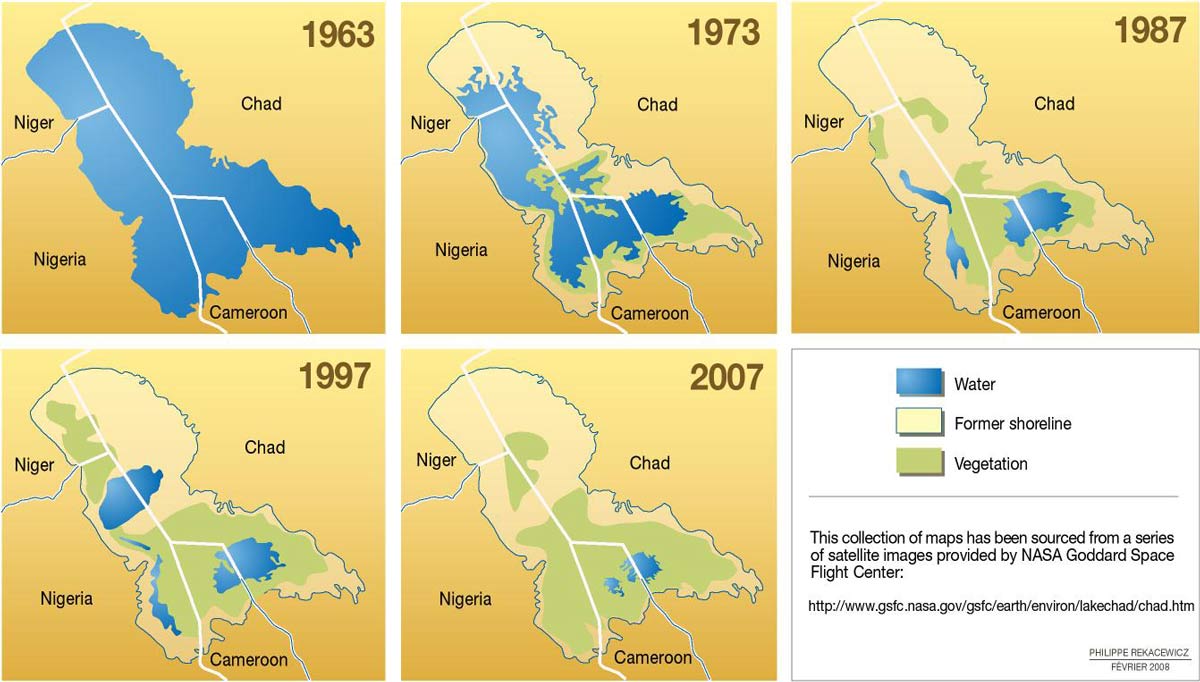 Lake Chad, once a source of livelihood for 30 million people, has shrunk by 90% since the 1960s

According to a joint report by the World Meteorological Organisation and African Union, African countries are going to bear the brunt of the climate change crisis. This is already happening with natural disasters across the continent like wildfires, extreme temperatures, floods, and droughts.

One of the most significant and tragic consequences is the drying up of the Lake Chad Basin, which covers almost 8% of the continent across seven countries — Algeria, Cameroon, Central African Republic, Chad, Libya, Niger, and Nigeria. Lake Chad, once one of Africa’s largest freshwater bodies and a source of livelihood for about 30 million people, has shrunk by 90% since the 1960s, according to the UN.

The Lake Chad Basin is experiencing a protracted humanitarian emergency, with factors including the effects of climate change and environmental degradation, such as the drying up of the lake, alongside conflict and poverty, according to Plan International.

What to Know
Local wildlife needs our help and protection — our homes can be homes for nature too.
Every one of us can create havens for nature to protect birds, bees and more.
Take the pledge and check out our articles on how you can make a difference.
After 12 years of violence, 10.6 million people needed humanitarian assistance as of September 2021, according to Relief Web, and 2.8 million people have been internally displaced. Other impacts have been an increase in child marriage, school closures, malnutrition, and outbreaks of malaria and cholera in the region.
Climate activist Adenike Oladosu has been advocating for climate action in Africa, particularly on the Lake Chad Basin crisis, since she was a university student and saw first-hand the effects of climate change.

At COP25 in Spain in 2019, Oladosu spoke about climate change in Africa and its impact on lives and livelihood. “The climate crisis is happening everywhere and we need to be at the centre of every conversation. This is the time for world leaders and developed countries to contribute to Africa,» she said.
Global Citizen spoke with Oladosu about her climate activism journey, the Lake Chad Basin crisis, and what governments and Global Citizens can do to help tackle the climate change crisis in Africa.

Global Citizen: What inspires your passion for climate action in Africa?
Oladosu: When I was an undergraduate student, 270 girls were kidnapped from their schools in the town of Chibok, Nigeria leading to the #BringBackOurGirls movement. I started to do some research on what had happened and found out that the depletion of Lake Chad was a major factor.
There was so much insecurity as a result of all the displacements and crisis that was going on in that area that unfortunately, that was not the first kidnapping incident. My university was in that area and I also saw first-hand the clashes between farmers and herders.
I started educating people who were seeing these issues as political or tribal issues and making sure they know that the underlying problem is climate change. I joined Fridays for Future to raise more awareness among young people in Nigeria, and we were able to do that because there was an increase in participation in climate action and young people being interested in climate justice.
I believe that for us to be able to solve the problem, the first approach is for us to know that the problem exists and then we can tackle it together because then we can start to look for solutions.

What effects has climate change had on the Lake Chad Basin?
Since the 1960s, the lake has been shrinking and this is really starting to affect the surrounding communities which are mostly in West Africa, but it also extends to some parts of Central Africa.
It is a unique lake that would normally serve millions of people but because it is shrinking, what we’re seeing instead is an increase in insecurity, drought, and famine from people who now have to fight to get access to water from the lake.
Farmers in those communities are losing their livelihood because [it is harder to grow crops without water and arable land]. It could get worse because the displacement camps that a lot of Lake Chad residents live in are currently a hotbed for diseases which could easily get out of hand as a result of the large number of people in camps.

How does this crisis affect women in particular?
Most of the people who are displaced in this region are women and girls. Because so much of their time and energy is spent trying to survive, they are not able to take care of themselves or their mental health or even get an education.
There has also been an increase in the number of child brides as parents are forced to trade their daughters for money or food. Child marriage is essentially a point of no return for these girls because they no longer have a chance to even have access to education or good health care, and are disempowered from contributing to society.
Girls also have to travel long distances due to droughts in their region to look for water or other basic amenities which makes them more vulnerable to be kidnapped or attacked. They might also have to drop out of school, if they were going to one, because of poor performances and attendance.

What can governments do to help the Lake Chad crisis?
The first thing that should be done is looking for sustainable ways to stop the shrinking of the lake. We can also stop deploying the military to this kind of crisis because we need more gender smart and climate conscious approaches.
So we have to look at it from an environmental perspective and realise that this isn’t about politics but human lives.

How can Global Citizens everywhere take action against the climate crisis in Africa?
Crisis in one place is a crisis everywhere and if Africa is not safe, nowhere else in the world is safe. As such, we need everyone on deck regardless of our differences because climate change needs global action.
And then as we think locally about climate change in our various communities, we also need to think about our global community. We can get our local politicians and changemakers to care about a climate crisis happening a continent away because we also need action from governments around the world.
Everybody is needed at this moment in the fight for climate justice, regardless of who you are, where you are from, or what you do.
www.globalcitizen.org/en/content/lake-chad-basin-climate-activist-adenike-oladosu/