Famine in Africa, War in Europe,
Violence in Brooklyn
Advertisement 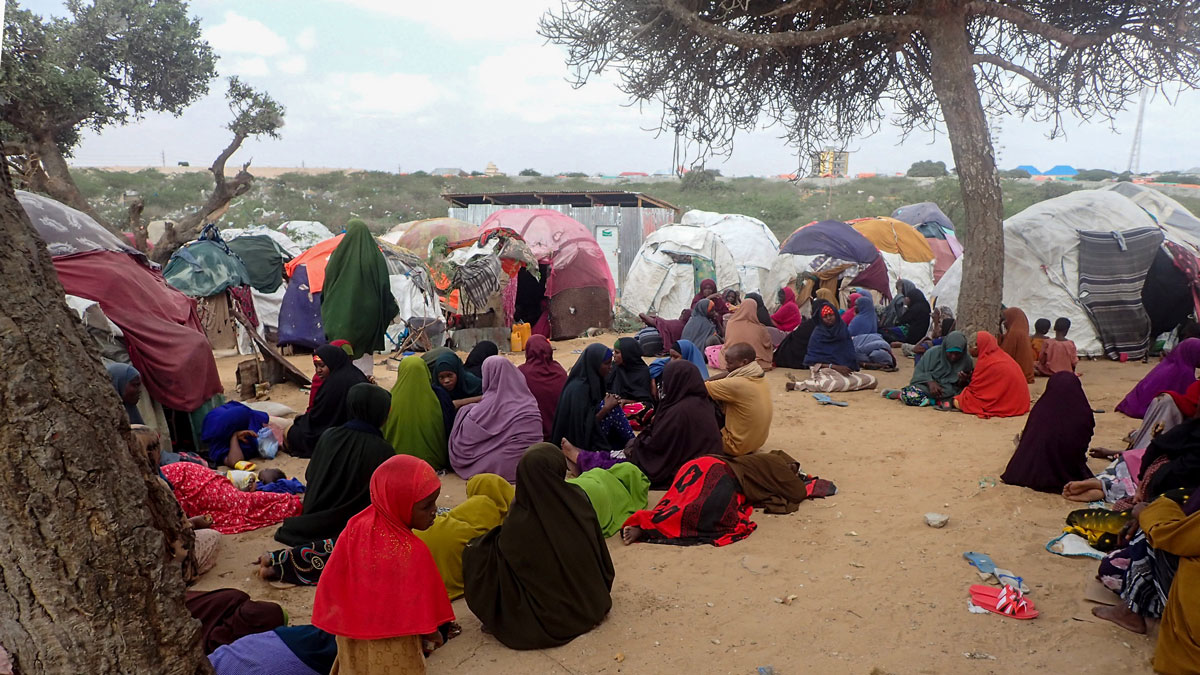 Under Attack in Another Part of the World: This too is what tragedy looks like. The government in Mogadishu, capital of Somalia, declared a humanitarian emergency in November and the UN’s World Food Program (WFP) warned that 13 million people in Somalia, parts of Ethiopia and Kenya, would face severe hunger in the first quarter of 2022. The WFP, unfortunately, was correct. According to the Associated Press, many “have walked for days, fleeing the drought now ravaging a large part of rural Somalia. Their growing ranks are expected to swell further in the coming months as the Horn of Africa faces its worst drought conditions in a decade.” Here, Drought-affected people sit between huts at the Al-Hidaya camp for internally displaced people on the outskirts of the capital. Many of them slept on the road for several days to reach the camp. (Credit Image: © Mohamed Odowa/dpa via ZUMA Press)” Page 5

By Mercy Juma
BBC News, Galkayo
As Somalia faces what experts call its worst drought in a decade, children are bearing the brunt. Parents are struggling to feed them, with nearly half of the country’s under-five population likely to suffer from acute malnutrition by June.

Nimco Abdi gently places her six-month-old baby girl onto a plastic basin supported with sisal ropes. The weighing scale from which the basin hangs reads 0.6 stone (4kg). That is almost less than half of what the child’s ideal weight should be.

She is too tiny for her age. Her eyes are sunken, bones are protruding and her skin is wrinkled and pale. She lets out a feeble, barely audible cry as Nimco picks her back up.
“I used to breastfeed her. But I became so sick from lack of food. And she got so thin, I decided to bring her here. At least she can get milk and drugs,” says Nimco.

Nimco has just arrived at a malnutrition stabilization center in Luuq, 310 miles (500km) from Mogadishu in south-western Somalia. She is given a bed inside the facility, which she will have to share with another mother.
Her story is one among many mothers who are facing the potential death of their children by malnutrition.

“If nothing is done, it is projected that by the summer of this year, 350,000 of the 1.4 million severely malnourished children in the country, will perish,” warns Adam Abdelmoula from the United Nations Office for the Coordination of Humanitarian Affairs (Ocha).

“Already in this country, 70% of school-age children are not attending school. In just one state in Juba land, the drought has led to closure of 40 schools and that is going to be the trend in many drought-affected areas,” he continues, adding that some girls are being married off early because their families cannot feed them.

Villages deserted
Fatuma Mohamed, a nurse at Luuq’s malnutrition center, says the bed capacity is 18, but more than 50 children and their mothers are here.
“Our worry is the big numbers that we are getting. We are overloaded and operating beyond our full capacity. We have been running short of medical supplies,” she says.
“The women are coming with severely malnourished children. And most of them also have acute watery diarrhea and measles,” she continues.

This center is only a glimpse of the situation across Somalia. The drought has affected 4.5 million people. The Juba River, the largest in Somalia, has barely any water left.
According to the UN, almost 700,000 people have been forced from their homes in search of food and water for them and their animals, and the numbers keep rising.
There have been four seasons of failed rains and temperatures are unbearably high – 90% of the country is dry.

Along the roads in rural areas, carcasses of animals are strewn all over – dead goats, donkeys and camels. This is catastrophic for the many Somalis who earn their living by raising and selling animals.
The prices for food and water are surging. Villages have been deserted as people move nearer to the urban centers in search of relief.
Those who remain behind are the elderly, who wait – either for the rain to fall, or for their young ones to come back with water.

The drought is affecting not only Somalia, but the rest of the Horn of Africa and many other parts of the continent. The International Committee for the Red Cross (ICRC) says at least a quarter of all Africans are facing a food security crisis.
There is also a dramatic rise in the numbers of displaced people. The hunger crisis is also being overshadowed by the Russia-Ukraine war, as all efforts, aid and funding are focused there.

The camps for internally displaced persons are scattered all over the country. And new ones keep springing up. Some people had not even recovered from the 2017 drought, which was declared a national disaster, before this one struck.

The worst is yet to come
In a camp in Galkayo, hundreds of miles north of Luuq, seven-month pregnant Hawa Fargod sits with her two small children. Her makeshift hut, like hundreds of others here, is made from sticks and covered with gunny bags and clothes. Her fireplace has been cold for days.
Next door to Hawa Fargod, Hawa Sharif narrates her three-day journey to the camp on a donkey cart, with her five children. The donkey died immediately when they got to the camp.
“That donkey was the last surviving animal we had. Everything else died.”

The drought has forced families apart – the men have gone to the towns to earn a living, while the women and children move where they can get aid.
Humanitarian agencies say there is a huge funding crisis. They have just 3% of what is needed to intervene in the country.

They are trying to send water trucks, food supplies and medical aid. But this cannot reach everyone – and in the next few weeks, it will not be possible unless more funding and donations are made available.

With April rainfall forecast to be average or below average, there are fears that the worst is yet to come.
The feeling of an impending sense of doom is one Hawa Fargod knows all too well. Struggling with kidney disease herself as well as sick children, she is not hopeful for the future.
“I fear for my children,” she says ominously.

Biden announced executive actions pointed at regulating ghost guns. The new rules require anyone purchasing a gun kit to undergo a background check, which is required for other kinds of firearm purchases. Those selling kits will also be required to include a serial number on the components that make up the weapon, so the firearm can be traced. Additionally, the new rules mandate firearm dealers add a serial number to already-assembled ghost guns they come across. Ghost guns are sometimes called privately made firearms, or PMFs, because did not have serial numbers.

“It’s no longer a ghost,” Biden said. “It has a return address. And it’s going to help save lives, reduce crime and get more criminals off the streets.”

Ghost gun weapons are made from plastic or polymer parts. They are untraceable, self-assembled firearms, sometimes put together with parts sold online. Ghost gun blueprints can be easily downloaded. To print out a gun’s lower receiver takes approximately 12 hours, but the metal upper receiver has to be purchased separately. It can take as little as 30 minutes to assemble the firearm.

According to the NYPD, there has been a rise in the use of these untraceable, homemade weapons in violent crimes. Last week, a ghost gun was used in the murder of a teenage girl, a 16-year-old high school student in the Bronx. A few days earlier, NYPD seized a cache of ghost guns during a raid in Brooklyn. This included eight complete AR- or AK-style rifles and five handguns. They also found a brand-new 3D printer. In March, a gun dealer in Brooklyn was caught with two 3D printers. As of April 6, NYPD has seized 131 ghost guns — almost one out of every eight guns recovered by the police this year. Mayor Eric Adams announced that since January 2022, the NYPD has recovered 163 ghost guns, compared to 29 over the same period in 2021.

In 2019, former Queens Council Member I. Daneek Miller, as co-chair of the Black, Latino, and Asian Caucus, sponsored Introduction 1548, which requires the NYPD to report on the number of seizures of ghost guns and 3D printed guns.

“The ability for criminals to get their hands on dangerous and virtually untraceable ghost guns is unacceptable,” Miller said in 2019. “In my Southeast Queens district, as well as throughout the City, we have witnessed a troubling uptick in gun violence. We must continue to be proactive in keeping our communities safe.”

According to the Giffords Law Center to Prevent Gun Violence, at least 10 states and Washington, DC, have already taken steps to restrict or ban the purchase or use of ghost guns.

Mar. 28, 2022 (GIN) – Ngozi Okonjo Iweala, the head of the World Trade Organizer, is warning that skyrocketing global food prices as a result of the war in Ukraine could trigger food riots from people going hungry in poor countries.

WTO Director General Okonjo-Iweala urged food-producing countries against hoarding supplies and said it was vital to avoid a repeat of the Covid pandemic, when rich countries were able to secure for themselves the bulk of vaccines.

In an interview with The Guardian of the UK, the WTO director general noted the dependence of many African countries on food supplies from the Black Sea region.
“I think we should be very worried. The impact on food prices and hunger this year and next could be substantial. Food and energy are the two biggest items in the consumption baskets of poor people all over the world,” Okonjo-Iweala said.

“It is poor countries and poor people within poor countries that will suffer the most.”
Okonjo-Iweala, a former Nigerian finance minister, said 35 African countries were dependent on food imported from the Black Sea region, adding that Russia and Ukraine were responsible for 24% of global supplies of wheat.
After being strongly critical of the “vaccine apartheid” that affected Africa during the pandemic, she said WTO member states had to resist the temptation of protecting their own food stocks.

“It is a natural reaction to keep what you have – we saw that with vaccines. But we shouldn’t make the same mistake with food.”
The last time rising food prices sparked food riots was between 2006 and 2008. Protests broke out in developing countries as  prices in a wide range of food, oil and other primary commodities increased in dramatic fashion, in some cases more than doubling within a few months. Policymakers were presented with the challenge of simultaneously addressing hunger, poverty, and political instability.

In Africa, food riots swept across the continent, from Egypt and Tunisia in the North, to Burkina Faso and Senegal in the West, and Madagascar and Mozambique in the South (Fig. 1). The crisis reinforced the extent to which oil and food markets have become highly interdependent, and highlighted the relative inability of national governments and the international community to adequately deal with dramatic surges in food prices.
“We must make sure we learn the lessons from vaccines and previous food crises,” Ms. Okonjo-Iweala said. “I am not sure we can fully mitigate the impact of the war in Ukraine because the numbers involved are huge, but we can mitigate some of it.”