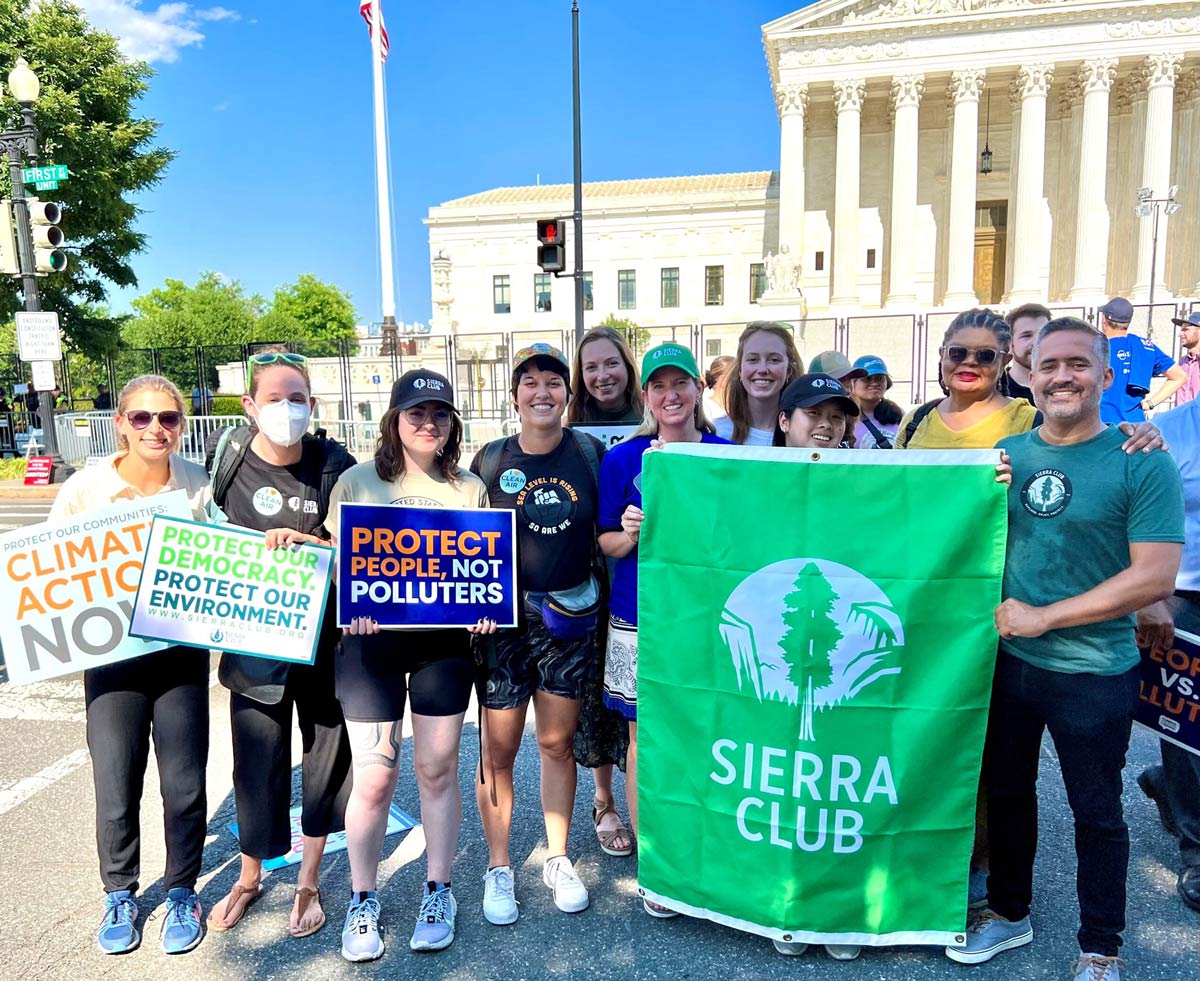 Ron Southwick
The American Medical Association said the court’s decision improperly curbs efforts to fight climate change and harms the public. More broadly, some suggest it could limit the scope of all federal agencies.

The U.S. Supreme Court issued a ruling that critics say improperly limits the Environmental Protection Agency’s ability to fight climate change and could harm public health.
Some analysts also say the ruling could potentially set a precedent to restrict the authority of the federal government, including healthcare agencies.

With a 6-3 ruling in West Virginia v. EPA, the court said Thursday the agency lacks the authority to utilize the Clean Air Act to enforce limits on greenhouse gas emissions from power plants, a major contributor to climate change.
Writing for the majority, Chief Justice John Roberts wrote, “​​Capping carbon dioxide emissions at a level that will force a nationwide transition away from the use of coal to generate electricity may be a sensible ‘solution to the crisis of the day.’”
“But it is not plausible that Congress gave EPA the authority to adopt on its own such a regulatory scheme,” he wrote, adding, “A decision of such magnitude and consequence rests with Congress itself, or an agency acting pursuant to a clear delegation from that representative body.”

Justice Elena Kagan wrote in her dissenting opinion that the court incorrectly supplanted the EPA’s authority.
“The Court appoints itself—instead of Congress or the expert agency—the decision-maker on climate policy,” Kagan wrote. “I cannot think of many things more frightening.”

‘Major health implications’
Jack Resneck, president of the American Medical Association, condemned the court ruling.
“Regulating and reducing greenhouse gas emissions is critical for combating the climate crisis and its major health implications, impacting the respiratory, cardiovascular, and immune systems of the US population, with minoritized populations disproportionately impacted,” Resneck said in a statement. “The AMA has declared climate change a public health crisis that threatens the health and well-being of all people and supports policies that reduce US greenhouse gas emissions aimed at carbon neutrality by 2050.”
“As physicians and leaders in medicine, we recognize the urgency of supporting environmental sustainability efforts to help halt global climate change and the devastating health harms that it is sure to bring,” he said.

The court’s ruling, significant as it is on climate change, could have wider repercussions throughout the federal government.
In the majority opinion, Roberts calls it a case involving the concept of “major questions,” an idea that Congress must give a federal agency specific authority to make sweeping policy decisions with significant economic consequences.
In an analysis of the ruling, Amy Howe of SCOTUSBlog wrote the case potentially affects all government agencies.

“Roberts’ full-throated embrace of the major-questions doctrine – a judicially created approach to statutory interpretation in challenges to agency authority – likely will have ripple effects far beyond the EPA,” Howe wrote. “His reasoning applies to any major policymaking effort by federal agencies.”

Robert Reich, former U.S. secretary of labor under former President Clinton, wrote on Twitter that the court ruling “has major implications for both the environment and the proper functionality of our government. Our climate and the regulatory powers designed to protect individuals, our families, and our communities are in peril.”
U.S. Sen. Ted Cruz, a Texas Republican, cheered the ruling and called it “a major victory for limited government.”

Some analysts said the court’s ruling makes it more difficult for the EPA to regulate emissions but it doesn’t completely negate the agency’s authority.
Richard Revesz, a professor at the New York University School of Law, called the ruling “a significant setback for environmental protection and public health safeguards.” But he said the EPA still can regulate greenhouse gases.

“The EPA still has avenues to address power sector greenhouse gas emissions, which it must do to meet its statutory obligations to regulate air pollutants that adversely affect public health and welfare,” Revesz said in a statement.
Still, some are worried about the broader impact of federal agencies aiming to enact their own regulations.

U.S. Jerry Nadler, a New York Democrat, said in a statement the ruling “invites spurious and politically motivated legal challenges to well established statutes and regulatory standards, and will have ripple effects far beyond this case.”

“Strong regulations are key to protecting public health and safety, promoting a stronger economy, and safeguarding the environment, especially for the predominantly Black, Brown, and Indigenous communities that are on the frontlines of the climate crisis and are already disproportionately affected by a warming planet,” Nadler said in a statement. “There can be no doubt that our nation’s food supply, financial markets, and healthcare systems will all become less safe because of this holding.”

U.S. Rep. Ritchie Torres, a New York Democrat, also said he feared the ruling will do more than restrict the EPA’s ability to limit emissions.
“There may be no decision in recent memory that will do more to cripple the federal government’s ability to protect the health and safety of every American than the Supreme Court’s decision in West Virginia vs EPA, which represents judicial malpractice,” Torres said in a statement.

‘Court substitutes its own ideas’
Kagan in her dissent argued the court is improperly taking the place of the EPA in its authority to set and enforce policy.
“Evaluating systems of emission reduction is what EPA does,” Kagan wrote in her dissent. “And nothing in the rest of the Clean Air Act, or any other statute, suggests that Congress did not mean for the delegation it wrote to go as far as the text says.”
“In rewriting that text, the Court substitutes its own ideas about delegations for Congress’s,” Kagan wrote. “And that means the Court substitutes its own ideas about policymaking for Congress’s. The Court will not allow the Clean Air Act to work as Congress instructed. The Court, rather than Congress, will decide how much regulation is too much.”
The ruling follows a number of recent Supreme Court decisions affecting healthcare in the United States.

Most notably, the court ruled last week that Americans don’t have a constitutional right to abortion. About half the states are expected to enact laws barring abortion, and some states have already taken that step. Healthcare groups widely condemned the ruling, saying it could cost lives, imperil the relationship of doctors and patients, and worsen health inequities for those who can’t afford to travel to states that still allow abortion.
The court also upheld a nearly two-decade Medicare policy involving payments to safety net hospitals.

Earlier this month, the high court unanimously struck down Medicare cuts to hospitals participating in the 340B drug pricing program, which offers discounts on certain drugs to hospitals with a high percentage of low-income and disadvantaged patients.

The EPA prepares for its ‘counterpunch’ after the Supreme Court ruling

Heard on All Things Considered
NPR
The Supreme Court’s ruling that curbs the power of the Environment Protection Agency will slow its ability to respond to the climate crisis, but “does not take the EPA out of the game,” according to the agency’s administrator Michael Regan.

The Court on Thursday ruled that the EPA does not have the authority to set limits on carbon emissions from existing power plants.
Regan labeled the move a setback and said it made the U.S. less competitive globally.

“Over the past 18 months or so, [the EPA] has done a really good job of focusing on the full suite of climate pollutants,” he said. “Power plants play a significant role in this larger picture and that’s why the Supreme Court’s ruling is disappointing, because it’s slowing down the momentum of not only curtailing climate change impacts, but the globally competitive aspects that this country can seize to create jobs and grow economic opportunities.”

President Biden has set a goal for an emissions-free power sector by 2035 and yesterday said the ruling was “another devastating decision that aims to take our country backwards.”
“While this decision risks damaging our nation’s ability to keep our air clean and combat climate change, I will not relent in using my lawful authorities to protect public health and tackle the climate crisis,” he said in a statement.

The court ruled the EPA does not have the authority to set limits on carbon emissions from existing power plants.
Regan said the EPA was taking time to review the ruling and he called on Americans to speak out.
“When we see the setbacks, we will take these punches, absorb them, but then come back with a counterpunch,” he said. “We’re going to move forward with every legal authority to regulate climate pollution and protect communities that we have.”

“Rulings like yesterday prevent us from moving forward as quickly as we would like. So Americans should use their voices as much as possible to ensure that we can move forward and do the things that the American people would like for us to do.”

The Biden administration came into office with the most ambitious climate agenda of any president, including the pledge to cut U.S. greenhouse gas emissions in half by the end of this decade, based on 2005 levels.

Regan wouldn’t be drawn on whether there could be ripple effects on the rest of the world’s ability to fight the effects of climate change if the U.S. failed to meet its own targets, and instead focused on the work the EPA had already achieved.
But he did say the court’s ruling was a hurdle on meeting those targets.

“The Court’s ruling, obviously, puts a speed bump in the path of the important work that this agency and other agencies would like to pursue. We will continue to keep our eye on the Court now and in the future.”

Lake Chad Is Drying Up. Meet the Nigerian Activist Fighting to Save the Lake and Its People