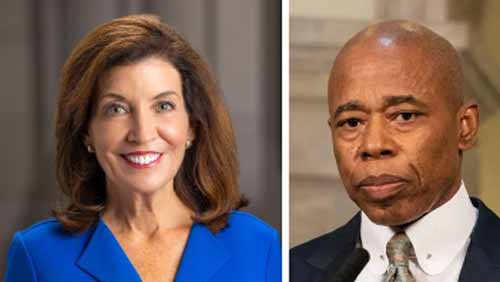 Cory Harris, Managing Editor,
www.securitysystemsnews.com
ALBANY, N.Y.—New York State Governor Kathy Hochul announced on Feb. 22, 2022, the creation of a Joint Security Operations Center (JSOC) in the New York City borough of Brooklyn that will serve as the nerve center for joint local, state and federal cyber efforts, including data collection, response efforts and information sharing.
In a partnership launched with New York City Mayor Eric Adams, Albany Mayor Kathy Sheehan, Syracuse Mayor Ben Walsh, Buffalo Mayor Byron Brown, Rochester Mayor Malik Evans, Yonkers Mayor Mike Spano, and cyber leaders across the state, the JSOC is the nation’s first-of-its-kind cyber command center that will provide a statewide view of the cyber threat landscape and improve coordination on threat intelligence and incident response.
“There is a new type of emerging risk that threatens our daily lives, and just as we improved our physical security infrastructure in the aftermath of 9/11, we must now transform how we approach cybersecurity with that same rigor and seriousness,” Hochul said. “I’m proud to announce this dynamic and innovative partnership to establish the Joint Security Operations Center in collaboration with New York City, our upstate cities, and government and business leaders across the state. Cybersecurity has been a priority for my administration since Day 1, and this command center will strengthen our ability to protect New York’s institutions, infrastructure, our citizens and public safety.”

Collaborative Approach
This innovative collaboration has been months in the making and is the result of Governor Hochul and her team’s early vision and commitment to enhancing the State’s cybersecurity posture. No other state has brought together cybersecurity teams in a shared command space at this scale including federal, state, city, and county governments, critical businesses and utilities, and state entities like Division of Homeland Security and Emergency Services, Office of Information Technology Services, New York State Police, MTA, Port Authority of New York and New Jersey, the New York Power Authority, among others.
“New York City is a prime target for those who want to attack our cyber infrastructure to cause destruction,” Mayor Adams said. “While New York City Cyber Command is already a national model for impeding these threats, it’s time our cybersecurity moved to the next level. We know that when it comes to cyberattacks, the difference between a minor disruption and a catastrophe can be a matter of minutes. That is why the new Joint Security Operations Center will take an integrated and holistic approach to hardening our cyber defenses across the state.”