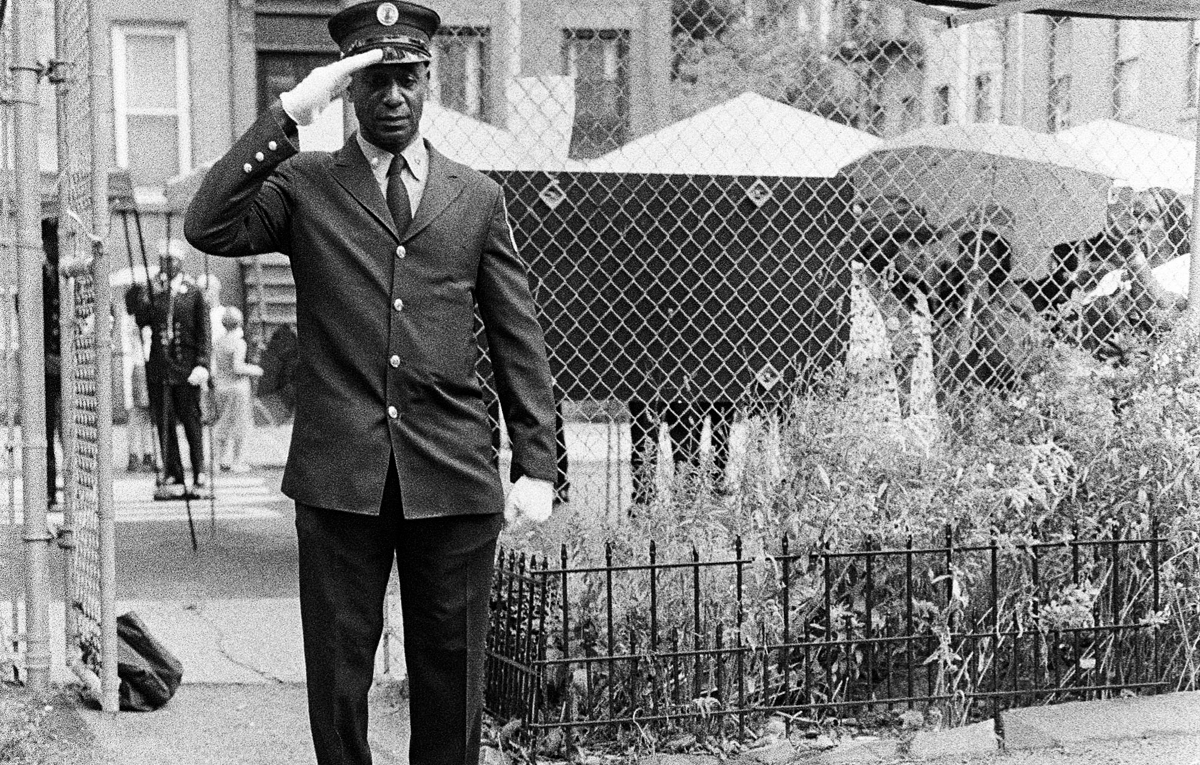 I Stand on the Shoulders of Giants…

On September 11, 2001, members of the Vulcan Society of black firefighters (founded in 1940) were among the FDNY who responded to Ground Zero in Manhattan after the attacks. Twelve brave black firefighters who assisted with rescue and recovery efforts made the ultimate sacrifice that day: Gerard Baptiste, Vernon Cherry, Tarel Coleman, Andre Fletcher, Keith Glascoe, Ronnie Henderson, William Henry, Karl Joseph, Keithroy Maynard, Vernon Richard, Shawn Powell, and Leon Smith Jr.
On September 11, 2022, the dynamic First Quincy Street Block Association remembered the fallen heroes in their Community Garden, a living memorial to the brave firefighters — founded by the late Herbert Tibbs in 2003. The day before, on September 10, there was a poignant street renaming for Mr. Powell on Monroe Street.
Inspired by Mr. Tibbs, the Vulcan Society missions, the “First Quincy Street” and Monroe block memorials, Our Time Press has launched a new “Remembering …” series, which looks at Bedford-Stuyvesant history through the recollections of its residents, block by block.
Next week, Mr. Tibbs, an Unsung Community hero, is profiled through the remembrances of his friends, neighbors, and the Vulcans.
This week, we look at the meaning and impact of the firefighter memorials to Bedford-Stuyvesant Black Millennial community activists through their voices, eyes, and journaling.

I, like many others, stand on the shoulders of ancestral giants, community leaders who knew how to tackle troubled waters; slay the Goliath obstacles of injustice to my Brooklyn community. There was no need to watch television to imagine meeting them. I could applaud their unselfish acts on behalf of their people: on my behalf, my family, my neighbors, and my friends. I am the beneficiary of their battles won and their wounds. Each of their victories was mine, too.

I am an heir camouflaged, protected by their protests and trials from adversities and intimidations that did not touch me. I stand on their shoulders like a child not tall enough to see its tomorrows yet filled with the excitement of its present. Like a child who had time to play. But there was no need to watch television to imagine I would meet them to applaud their unselfish act. Each of their victories was one of mine too. They lived in my neighborhoods, on my blocks.

I am the beneficiary of their fight, battles, and wounds. I am an heir, camouflaged yet protected by their protest, their vigilance. They deflected the trials and intimidations that did not touch me. I stood on their shoulders as a child would: not tall enough to see its tomorrows yet filled with the excitement of its present. My ancestors gave me time to be at play. But because of their examples and lessons, I saw the land for what it was: dry. I understood that my job was to ensure the generations beyond me see and maintain justice, equality, liberty, and the abundance stamped as our birthright. I learned that melanin folks are kissed by God’s grace, favor, and mercy. We are because our ancestors were.

Growing up in Bedford Stuyvesant, I was privileged. I was blessed to learn about community engagement from my grandmother Willie Mae Johnson and my great-grand-uncle, William Jackson. It is because of them that I met community giants, not in textbooks, but down the block, in community gatherings, at church like Mr. Herbert Von King and First Lady Mary Von King; Mr. Herbert Tibbs, the progenitor of the First Quincy Street Community Garden (which is the only registered living monument that listed the names of the 12 brave black firefighters who were a part of the Vulcan Society within FDNY); Mr. Al Vann who strengthened the Bed-Stuy community in a multitude of ways and, by extension, all of New York City, and Black politics. There was the impactful Rev. Gardner C. Taylor of Concord Baptist Church, an instrument for the community’s spiritual growth.

I am the beneficiary who was able to get a summer youth job through the community’s Vannguard and celebrate on the sidewalk as Nelson Mandela paraded Fulton Street through my neighborhood.

I stand on the shoulders of so many who have lived and are still living. They were our naturally powerful heroes without capes and without animation by controlling unseen hands. I see their work is not finished, and I know it is my responsibility to be the community trustee for those who will inherit tomorrow. We stand on their shoulders.
From their shoulders, I ascend, and I see the dry land. My job is to ensure the generations beyond me see from my shoulders the promised land of justice, equality, liberty, and abundance stamped as our birthright.
We are because they were. They walked and lived in excellence.

About Rismia Johnson A resident of Bed-Stuy for 37 years, Ms. Johnson is the president of the First Quincy Street Block Association located between Tompkins and Throop, the same block on which Mr. Herbert Von King served as president. For seven years, she held the position of Vice President of the First Quincy Street Community Garden, founded by the late community leader Herbert Tibbs who also lived on the block. She is the founder of EEYSP, an organization that supports young black entrepreneurs and mentoring organizations serving unrepresented youth. She is a member of VIDA, which Al Vann launched. She graduated from JHS 35 (Stephen Decatur) and was salutatorian of her graduating class. She was among the top 10% of her graduating class at John Jay H.S. She Graduated top 10% of NYC (John Jay HS). She earned her BA in African Studies from Brooklyn College, CUNY. She is currently in partnership with NYCT / MTA as an Associate Staff Analyst. She has advocated for youth and the community for nearly two decades. All photos: Rismia Johnson unless otherwise indicated.

Related Topics:9/11firefightertopstoriesvulcan society
Up Next

What Has Always Mattered