What Has Always Mattered
Advertisement 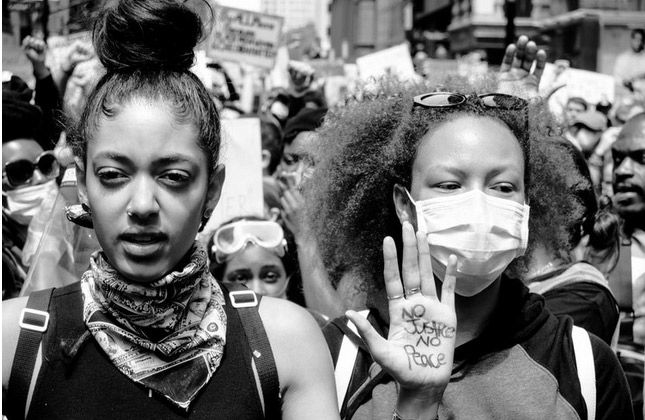 Chris Cook: The Black Lives Matter Photographs With selections from the Kenkeleba Collection – September 14 to October 15, 2022

From September 14, 2022 through October 15, 2022, the Wilmer Jennings Gallery at Kenkeleba will present an exhibition of photographs by emerging artist, Christopher Cook.

Like most of us in 2020, Chris was ‘sheltering in place’ at the height of the Covid-19 pandemic when we all saw a black man plead for his life, then gasp his last breath while pressed under the ruthless knee of official power. It was clear to most who saw those televised images that things had finally fallen apart, that the line had been crossed. It became incontrovertible, visual proof of what Black people had always known, and a revelation for many friends and allies who, couldn’t grasp what life (and death) could be like for ordinary Black citizens from the time of slavery onward. For Chris there was no choice but to take his chances with Covid. He packed his cameras and joined the surging New York crowds marching for essential change; for a simple idea: that Black Lives Matter.

Back in 1963, James Baldwin, in a caustic speech, spoke of the situation as it was then—and unfortunately, remains the same at present: Let’s begin by saying that we are living through a very dangerous time. Everyone … is in one way or another aware of that. We are in a revolutionary situation, no matter how unpopular that word has become in this country. The society in which we live is desperately menaced … from within. Any citizen of this country who figures himself as responsible … must be prepared to“go for broke.”

‘Going for broke’, Chris Cook, as participant and documentarian, definitively threw himself into the fray, bringing back to us stark, mostly black and white images as dramatic evidence from his days on the embattled New York City streets. For this exhibition, his photographs have been augmented and illuminated visually, historically and textually by interspersed works of art drawn from Kenkeleba’s collection of classic paintings, prints, and drawings. They date from the late nineteenth century down to contemporary times. These works by Black artists expand upon and interact with the themes of continuity and conflict inherent in Cook’s images. From a seemingly innocuous, classic landscape by H.O. Tanner, these subtle and telling tales tap into a defiant 19th century attitude, and we find David Hammons’ “Afro American Flag”, powerful images by Hale Woodruff, John Biggers, Wilmer A. Jennings, and a few much younger artists, such as Terry Boddie. The exhibition is curated by Carl E. Hazlewood.

Christopher Cook was born and raised in Brooklyn. At twenty-six years of age, he has exhibited in New York, from the Lower East Side to upstate Auburn. He was a 2020 AIM Fellow at the Bronx Museum of the Arts. In February 2021 his work was presented in a solo exhibition at Brooklyn’s Welancora Gallery. In the Summer of 2021, he completed an Artist Residency at the Constance Saltonstall Foundation for the Arts in Ithaca, New York. The Valentine Museum of Art acquired 160 of his Black Lives Matter photographs in 2021, which are available now as a limited edition 360-page book with text by Carl E. Hazlewood and Halima Taha.

Kenkeleba programs are made possible, in part, by public funds from the City of New York Department of Cultural Affairs, in partnership with the City Council, the Mosaic Fund and many generous friends.
For more information visit www.kenkeleba.org