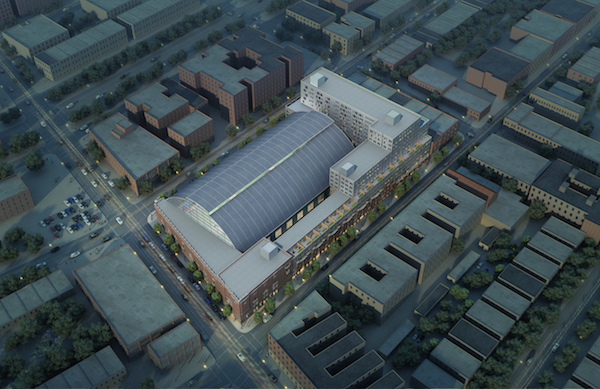 City Council Member Laurie Cumbo (Fort Green, Clinton Hill, Prospect Heights, Crown Heights) yesterday called on the other elected officials and stakeholders in the Crown Heights community to come together around plans to redevelop the Bedford Union Armory and not “kill the project” as some are calling to do.

“Communities of color are continuously weakened by the divide and conquer strategy, which is a tool that has been utilized for centuries. We often see the only way to raise our visibility or relevancy is at the expense of others that look just like us. When elected officials worked together alongside community members and advocate groups, we accomplished great victories for our communities,” said Cumbo in an emailed statement.

“”Killing the project” will not guarantee the start of a new RFP process now or in the foreseeable future, nor are elected officials empowered to select a potential new development team due to a conflict of interest. With respect to conflicts of interest law, City of New York elected officials do not have the ability to inform the process or select winners of a RFP because they must be made in an independent and impartial manner,” she added.

Cumbo is the lead negotiator for the community as the local city representative in the city-owned property. In December, it appeared she struck a deal with the city and developers BFC Partners and Slate Property Group to enter into a 99 year lease for the developers to construct 330 units of housing, about half of which would be condominiums.

However, Slate has since pulled out of the deal after it was found to have conspired to cover up plans to redevelop the former Rivington House nursing home on the Lower East Side into luxury housing until the city lifted a restriction mandating that the property be used solely for health care purposes.

Since that letter, Richardson, in particular, has been very vocal about ‘killing the project” and her Facebook pagehas several references to #killthedeal. The page also has an issue with the BFC Partners, alleging they are withholding heat and hot water to some of their tenants in East Flatbush.

Richardson did not return several emails, calls and texts to KCP. Both Hamilton and Mosley refused comment, but Clarke stood her ground on insisting on a better deal including making the entire project affordable.

“The development of the Bedford Union Armory must benefit the greater community of Crown Heights in many different capacities, with affordable housing prices set appropriately for the neighborhood, with programs that provide opportunities for local organizations and institutions to benefit children and families, and economic opportunities for local entrepreneurs with good jobs available to directly support individuals in the neighborhood who are looking for work,” said Clarke.

“At a time when gentrification threatens many longtime residents with displacement, we need a comprehensive approach that significantly and substantially addresses all of the community’s needs,” she added.

Cumbo, though, feels with time the redevelopment plans can be negotiated to everybody’s liking.

“My greatest fear is that the Bedford Union Armory will remain abandoned for decades to come producing no affordable housing, no employment opportunities for our neighbors, or needed space for our local businesses and non-profits,” said Cumbo.

From the time that Congressman Major Owens envisioned revitalizing the Bedford Union Armory until now, tremendous progress has been made. However, we have a very long way to go to make sure that this project is done right for current and future generations.”