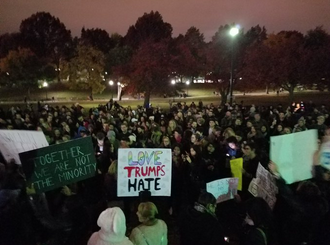 Yesterday, protests erupted in New York and around the country following the results of the 2016 US Presidency Election.

Hundreds are now gathered on the Boston Common and many more are streaming in to protest Donald Trump. pic.twitter.com/KZTjPPyXvW

Protest has left the tower and is headed towards the Texas Capitol building #Election2016 #TexasVotes2016 pic.twitter.com/MehTAlKsAO

Related Topics:Election 2016Protests
Up Next

Cumbo Calls For a Meeting Of Minds On Bedford Union Armory