As Above, So Below
Advertisement 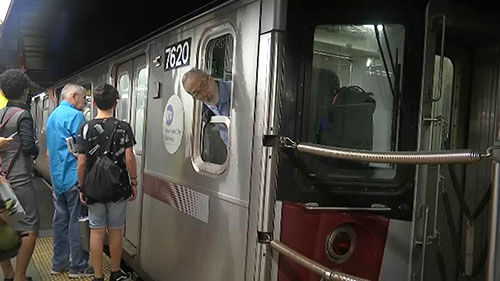 
I can tell you dozens of subway stories from my time growing up in this community.

When I was a kid, my mom would take the train home and if she needed extra hands to carry bags then she’d call me when she was leaving work and I would be directed to meet her at the Nostrand Avenue train station. I remember one time a young guy tried to hop on a moving train, he tried to hop on between cars and he slipped, and his body fell and twisted between the platform and the subway car. I could remember watching as he cried in agony, half his body beneath the platform. The firefighters that responded soon announced what they had discovered. He was alive, but his lower half had been twisted 180 degrees around. I heard one firefighter tell the other that once the pressure from the train laying against his body was moved, his insides were going to fall out and he’d surely die.

Another time, I was waiting for my mother and when she got off of the train, she was accompanied by two other women. They were all visibly upset. After listening to their conversation, I realized why. Some man had masturbated while on the crowded train and he ejaculated on one of the lady’s trenchcoat. Funny thing is that later down the line I was on the train with my mother and she pointed the guy out to me. I might have been 11 at the time, but I’d go on to see this guy in the subway system (occasionally) for the next 20 years. I watched him grow old and feeble, and to me he was always the nasty guy that violated that lady on the train.

Yet another time, my stepsister Robin and family friend Todd decided to take me to see “Raiders of the Lost Ark” in Times Square. We went to the 10pm showing. That train ride was one of the scariest I’ve ever taken. Gangs were beating people up, drugs were being used on the platform and in the train itself, and there was some weird guy that sat across from me and stared at me until Todd threatened to break his nose.

I can literally tell you a litany of criminal activity that I’ve seen in the subways during my 44 years riding them – stabbings, assaults, drug use, predatory harassments, suicides – but the one thing that I don’t remember seeing until recently is this excessive and unnecessary violence perpetrated by the NYPD upon Black and Brown folks.

A couple of weekends ago, there were two incidents in the subway system that personify the apparent behavior of cops as it pertains to Black and Brown lives. On Friday, October 25th, cops responded to an alleged fare-evader by storming the subway car that he sat in with guns drawn. The young man had no weapon and made no indication that he would obstruct justice. Video shows that he even raised his hands in the air as soon as he saw the cops on the platform. And yet they still rushed into the subway car with guns drawn and dragged him to the ground and out of the car as if he was a dangerous felon. The majority of the officers were white. The alleged fare-evader was Black. Their excuse? They thought he had a gun. No weapon was found.

The next day, officers responded to a group fight taking place at the Jay St. station. This time, video shows one of the officers repeatedly punching a young man about the head and face. It isn’t clear if the victim of police brutality was even one of the persons involved in the fight. But he was Black. And the officer who beat on him–he was white.

Every so often, there is this uptick in confrontations between cops and the community and it gets citywide attention. The community protests and calls for justice. The PBA and administrators explain away the incidents and call for support of the police force. Elected officials usually say what they need to, all depending on who they are talking to. But nothing rarely gets done because no one is willing to address the root of the issue.

My friend and fellow Technite, Public Advocate Jumaane Williams, spoke to the root of the problem directly last week. He said, “I think that there is something that happens in the psyche of a lot of folks when they see Black and Brown bodies that the response has to be extra.”

The root of the problem is conscience and unconscious bias. Until we can face that truth and educate law enforcement about the causes and symptoms of bias and how to reconcile that bias, the most dangerous gang above ground and below will continue to be the “boys in blue.”