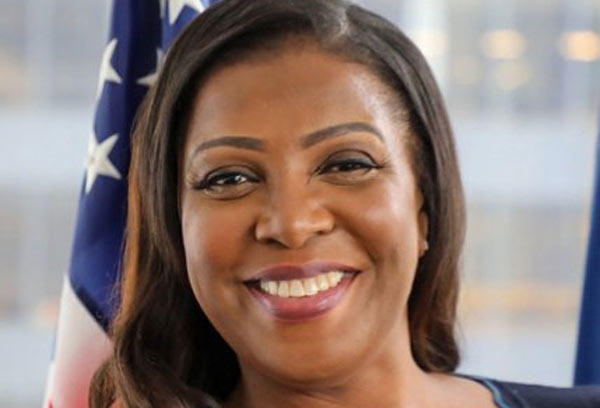 By David Mark Greaves
On October 31, in lower Manhattan, New York State Attorney General Letitia James held a Q & A. session with members of the ethnic and non-profit press that are often overlooked in the rarified air and allure of mainstream media.

We asked Attorney General James for her comments about her Republican opponent, Michael Henry, and his linking of the bail reform law, which she champions, to rising crime.
AG James said she recognizes the increase in some crime levels in New York City and the fear people have. However, linking it to the bail reform laws is a mistake and is a connection not born out of the facts. “You cannot discuss bail reform without discussing other issues that might be drivers of crime.” This was a recurring message that Ms. James was determined to get out.

The bail reform laws were necessary to prevent incarceration because of poverty, and James said she did not want to return to the days when people were in jail because they had no money, while those who could afford it did not have to wait for their trial in a cell. “We need to look at the drivers of crime, the data, and see what adjustments we can make and investments where there is great need.

One of those drivers of crime is mental health, as demonstrated by the recent random violent attacks by mentally disturbed people. Attacks bring the fear of crime and the perception of things being out of control.

AG James said she had held a series of mental health hearings across the state, and what emerged was evidence of the disparity between what was needed for treatment and the hospital beds and facilities that were available, partly due to the lingering effects of the Covid pandemic.
The drivers of crime are many, the AG said. “We must look at the lack of pretrial services, which is critically important. Pretrial services to monitor individuals released on no-cash bail.”
Citing other drivers of crime, she included a lack of affordable housing and inadequate “investment in communities that are often ignored.”

Ariama Long from the Amsterdam News asked if voter- suppression and illegal intimidation were still as prevalent as the guidance James’ office had to issue in the 2020 election. James responded with two examples of voter suppression in the state. Her office recently won a case against Rensselaer county for removing drop boxes from communities of color. Secondly, the stopping of Robo callers with messages warning Black people that if they showed up at the polls, there would be debt collectors, background checks, and other privacy threats. All to prevent people from voting in New York and other states, including Michigan, where they were indicted. “Even though this is a blue state, voter suppression happens here as well,” said James.

Regarding the Trump investigation, James spoke only about what is public knowledge. Adding, “If any individual in this room were to file false documents and obtain a loan violating the law, we would all be incarcerated and all brought up on charges. And so, the same system should be applied to the Trump Organization. As you know, this office has limited criminal jurisdiction, and that’s why the case before the court is a civil matter.” James said her office’s case is “based on facts and evidence,” notwithstanding Trump’s usual cries of “witch hunt.”
A reporter asked what the AG’s office was doing to assist the primarily Black and Brown tenants with legal representation. “, Tenants facing eviction are allowed to have representation in Housing Court but more than two-thirds of the tenants have been denied the right to council despite the law.”

James said she has heard personally from people in housing court, as well as through her office, that “the Right to Counsel law is not being implemented and that they’re being denied the right to counsel in landlord-tenant court, and it’s a concern.” She went on to list several initiatives her office has taken to help tenants, including $20 million to keep people in their homes, $700,000 for legal services for individuals in landlord-tenant court, and is leading an effort against the blacklisting of tenants. “We are a complaint-driven office,” in order for them to act, complaints have to be filed to be reviewed by the tenant protection unit.

Regarding the situation at Riker’s Island, which has had eighteen deaths this year, James said, “Riker’s Island is becoming a housing and a mental health facility. And they’re not getting the services they need. And what we should be doing is diverting those individuals to hospitals and to programs where they can get services. In upstate New York, they closed all of these mental health institutions, and we see the result on the streets of New York City and in our subways.”
The attorney general ended to remind voters to turn their ballots over this election and see the proposals on the back. She’s voting yes to all.