Mother pleads for help finding
killer of her son
Advertisement 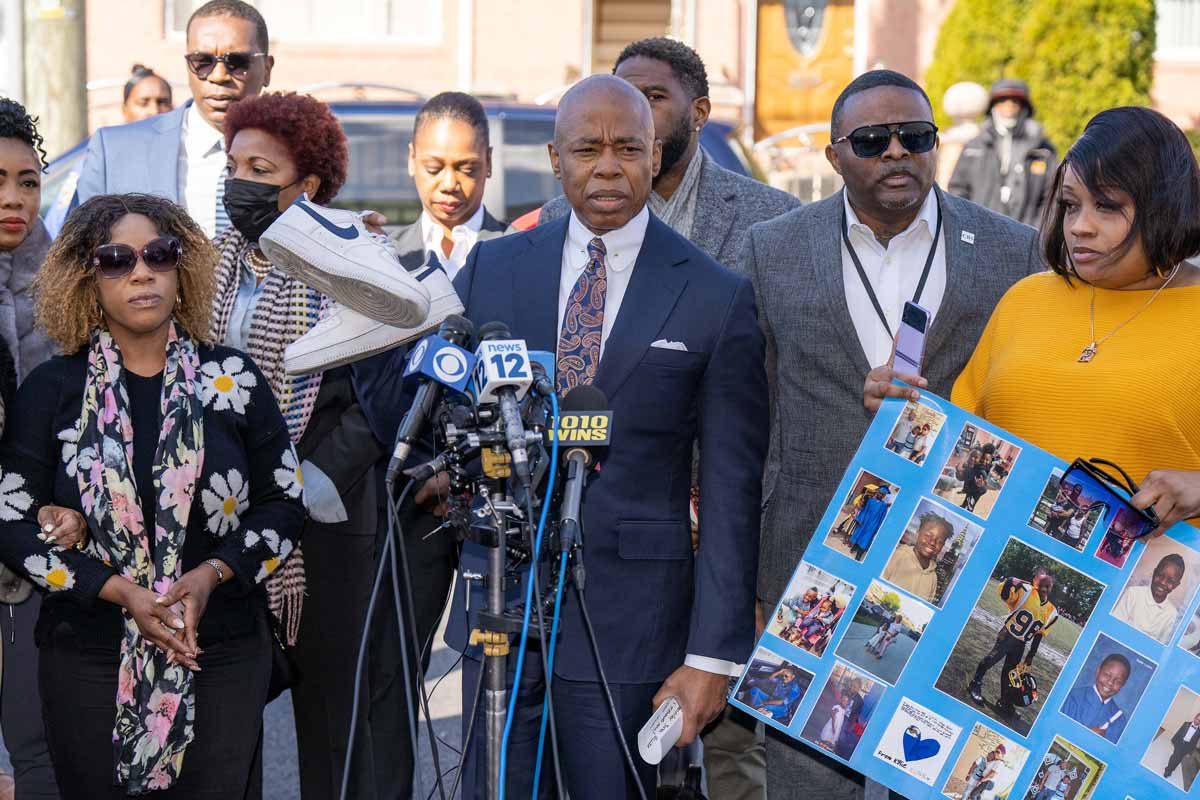 Mayor Eric Adams along with other officials, stand with Suzette Lewin, at left in glasses, mother of murdered 12-year-old Kade Lewin, as they plead for help finding the killer. on April 4, 2022. (Credit Image: © Theodore Parisienne/New York Daily News/TNS via ZUMA Press Wire)

Last week, 20-year-old college student Jenna Ellis decided to treat her 12-year-old cousin Kade Lewin and her 8-year-old niece to a Boston Market dinner in East Flatbush. Jenna had recently gotten her license and was driving Kade’s mother’s car. As the young people sat in the Toyota Corolla enjoying their meal and watching a video, a barrage of gunfire erupted between two cars. The bullets violently struck the car with the children.

The shooter fired 11 bullets into their car, striking Kade in the head and chest multiple times and killing him. Jenna was shot six times hitting her leg and right cheek and was rushed to Kings County Hospital where she is expected to survive but remains in critical condition. Miraculously the bullets missed the 8-year-old girl and she was not physically hurt.
New York City was horrified.

At a special press conference with Mayor Eric Adams, Kade’s mother Suzette Lewin pleaded with the public for help. “All I’m asking, please come forward. Please, please, somebody say something,” she cried. “I’m asking for justice for Kade.”

“Whose child is next?” Adams demanded. “We can replace the name of Kade with so many other names. Promising young people snatched away from us… For no other reason — too many guns on our streets, too many people who are willing to use those guns to harm innocent people.”

The assailants were looking for a different Toyota Corolla in East Flatbush. Shocked by Kade’s killing, New York Public Advocate Jumaane Williams stressed that gun violence is literately killing people. “He’s 12 years old. His mother raised him as best as she could — ‘A’ student, not in the street, doing everything right, just like Jenna,” said Williams. “They paused in their community to eat something and were shot. That is unacceptable by any stretch of the imagination. There has to be consequences and accountability for that.”

Police Commissioner Keechant Sewell asked for the public’s assistance. “Murders, shootings, robberies, assaults go against everything we should believe ourselves to be,” she stated. “Your NYPD is doing everything it can and knows how to do well to deter and prevent and apprehend those responsible, but we need your help. Kade’s mother needs your help.”

Anyone with information in regards to this incident is asked to call the NYPD’s Crime Stoppers Hotline at 800-577-TIPS or by visiting the NYPD’s website.

Metal Detectors in the Subway System? Not what you may think.