Workers Vote No on Union in Bessemer, Ala.
Advertisement 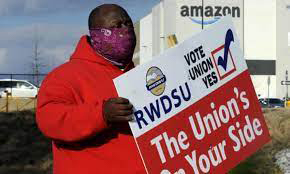 Although the final vote reportedly dealt a blow to Amazon workers’ unionization efforts in Bessemer, Alabama — with, according to the National Labor Relations Board, 738 in favor to 1,798 against, the “setback” has not killed the spirit of the movement. Following are perspectives culled from media coverage of the fight by such workers as Michael Foster and Mona Darby (above) for unionization as well as unity, humanity, equity and respect.

“US unions not fazed by setback;

vow to keep up the organizing effort”

The coronavirus has spurred worker organizing efforts around the United States, as the spread of the virus created a sense of urgency in improving working conditions, safety protections and job security.

Joe Biden, Democrats and labor leaders are pushing for the passage of the Pro Act, which would represent the largest labor reform legislation since the Great Depression, aimed at helping workers organize unions and rein in interference from employers. The bill passed in the House of Representatives in March and is currently awaiting a vote in the Senate.

Several of the organizing efforts spurred by the coronavirus have culminated in union elections in some industries with low unionization rates.

On Friday, that movement suffered a setback when workers at an Amazon warehouse in Alabama voted against forming a union after a fiercely contested fight that garnered national attention.

But labor groups say they are undaunted, and point to progress in a wide range of industries.

‘We are Able to Breathe Again’

Dr. Beverly Wright, Environmental Justice activist and scholar, appointed as an advisor to The White House