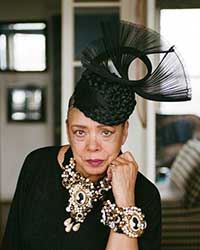 What’s Going On
By Victoria Horsford

A clinical professor at Mt. Sinai Health System and the Clinical Education Director of the NYS Department of Health AIDS Institute, Dr. Smith specializes in internal medicine. People 60+ years know: 1) to wash hands often and vigorously, 2) store enough food for 30 days and 3) avoid large crowds until more info is forthcoming regarding the COVID-19. They must race to the emergency room if they experience coughing, fever and shortness of breath. P.S.—Read the NY Times Charles Blow opinion piece, “You Can’t Gaslight a Virus: President Trump’s Usual Political Tricks Won’t Work Now.” Blow concludes that “Trump is as much a public health threat as the virus itself.”

On 3/10, Governor Andrew Cuomo said, “NY was the second-most afflicted state in America, with 173 coronavirus cases.” The largest cluster is in New Rochelle, where he plans some containment and mitigation measures: closing schools and large places of assembly. Worldwide, fear is spreading quicker than the virus pandemic. Stock markets are diving, airlines are cancelling flights to COVID-19 areas, schools and colleges are closing, as are sports and entertainment venues. March Madness and the NCAA games are played to anemic audiences. Sports franchises are undecided how to proceed. The crisis demands more facts from scientists. Last Saturday, a Chinese hospital used robots to manage COVID-19 patients, an effort to protect doctors. Moreover, Chinese and American researchers are looking for a vaccine, something ready for use this summer.

LAW AND ORDER: What is happening with our teens? Why did 15 Black Brooklyn teenage boys beat a young Black girl until she was unconscious, then stole her Air Jordan sneakers, a debit card and cell? Behavior is unacceptable. NYPD reports the beating was revenge because victim assaulted a young woman earlier that day. About nine of the teens were in custody at press time. These Black teens have destroyed life, theirs and the victims. How do adults address this Black teen dysfunction?

NYS Chief Judge Janet DiFiore, Court of Appeals, is confident that the Bail Reform Law will change, be amended and strengthened, allowing judges the ability to keep people in jail deemed too dangerous to release. This is one item that should have had a public debate last year before the votes were tallied in the Assembly and the Senate. Opponents of the law are diligent and have daily support in the tabloids like the NY Daily News and the NY Post.
Read the NY Times editorial, “Even 14-Year-Olds Who Kill Are Not Adults,” a reference to the tragic stabbing death of a 19-year-old white Columbia coed who was allegedly killed by three Black teens, a 13-year-old and two 14-year-olds. Editorial is a thoughtful reflection and its reasons against charging the 14-year-olds as adults. Editorial concludes that “crimes like Tessa Majors’ killing test the limits of forgiveness and redemption. But charging adolescents as adults make the state crueler, not safer.” Times cites a 1970’s NY law, which justifies the criteria for the 14-year-olds. Its application is inconsistent, depending upon which way the political winds flow and bend… and has power in Albany and a relationship with the NYPD.

Former 2020 Presidential hopeful Andrew Yang is considering a run for NYC Mayor 2021. He is supporting some hopefuls who advocate for “universal basic income” who will challenge/primary congressional incumbents in a number of states. Locally, he supports James Felton Keith, an engineer/economist in the June 23 NY primary who is running against Congressman Espaillat.

WOMEN IN THE NEWS

The Black Enterprise Women of Power Summit is a four-day convention attended by executive and professional women. New Yorker Harriet Michel, former president of the National Minority Suppliers Development Council, was honored as one of the “50 Most Impactful Women in Business Over the Past 50 Years” at the Women’s Summit held in Las Vegas last weekend.

A private memorial for the late Barbara (aka B.) Smith, restauranteuse, author, lifestyle maven, was held on March 3. Her B. Smith’s Restaurant in midtown Manhattan was a popular 80s destination for the Black middle class. The memorial was organized by her husband, Dan Gasby, and daughter, Dana Gasby.

Former XEROX CEO/Chair Ursula Burns donates $1 million to The
HistoryMakers to research the lives of African-American women for its new WomenMakers initiative. HistoryMakers is an oral archive which has recorded stories of more than 3000 Black newsmakers and achievers which is accessible digitally. Burns, the first Black woman to head a Fortune 500 company, enthuses, “We have to value our own stories.”

Stacey Abrams, attorney/author and erstwhile Georgia state legislator who founded FAIR FIGHT, a voters’ rights organization. Ms. Abrams ran for Georgia governor in 2018 and lost in a close race which I believe was stolen by the state’s ruling GOP, a customary practice. A rising star in national politics. Many speculate that she could be VP choice for the 2020 Democratic Presidential nominee.

A Harlem-based media and real estate consultant, Victoria can be contacted at Victoria.horsford@gmail.com.