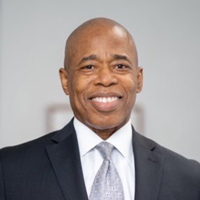 NEW YORK, NY
Democrat Eric Adams is the presumed winner of the 2021 NYC Mayoral race. The NY Times story “What Type of Mayor Might Eric Adams Be, No one Seems to Know,” as is the NY Magazine cover story, “The Winning Eric Adams.” subtitled “Beloved from East Brooklyn to Billionaire’s Row, He is poised to be the most powerful mayor in decades.” Both stories cover the same Eric Adams biographical territory, growing up working poor, the NYPD, One Hundred Black Men In Law Enforcement Who Care, the NYS Senate, the diabetes 2 diagnosis and his conversion to a vegan diet, the Brooklyn Borough Presidency. Both conclude that he is an unknowable political centrist with godfathers like Rev Herbert Daughtry to Rev Al Sharpton to Mike Bloomberg. He dines with, ahem, Bo Dietl and John Catsimatidis and is comfortable with city’s business and union leaders and its myriad ethnic subcultures – Jewish, Asian and Muslim Americans, Latinx and African Americans. Adams has lusted for the mayoralty for decades. NY Mag story is more provocative. NY Mag enthuses. “Adams has a way of being all things to all people, universally appealing and charmingly mysterious.” Hopefully, that appeal translates to a 11/2 victory.
Your vote is important.

AUTUMN IN AMERICA
Elections 2021: The 2021American electoral map will forecast 2022 midterm trends and the future of American democracy. Democrats NJ Governor Phil Murphy and Terry McAuliffe, former governor Virginia running for his old job, are in close races. Next week’s elections will reveal impact and popularity of the Biden agenda. Mayoral races to watch where Blacks are running include Buffalo, NY, Rochester NY, and Boston, Massachusetts.

The FBI and other American officials are in Haiti negotiating with the Haitian gang 400 Mawozo for the release of 17 American and Canadian hostages, who were kidnapped by the gang more than a week ago. Gang wants $17 million ransom. Media has been silent since the FBI arrival.

HBCU UPDATE
Howard University receive $5 million gift from alumni couple Eddie C. Brown and C. Sylvia Brown, grads of 1961 and 1962, respectively. Gift is the largest alum endowment in Howard’s 154-year history. Monies must be used for scholarships. Howard also recipient of a $16.8 million grant from the PNC Foundation to support and develop businesses owned by Black Americans. Howard will share the grant with other HBCUs – Morgan State, Clark Atlanta University and Texas Southern.
Reverend Dr. Emma Jordan Simpson named president of the Auburn Seminary, which was founded in Auburn NY in 1818 but relocated to NYC during the Great Depression. Auburn is the birthplace of the Black theology, womanist theology movements.

SUDAN: A military coup ended the fragile 2-year experiment in democracy following the ouster of long-time autocrat Omar al Bashir. It was second coup in two years. The 2019 coup was a fragile power sharing military/civilian government arrangement. Elections were scheduled for July 2023. Sudan had close ties with the Arab governments. Its recognition of Israel last year was a surprise to many, but there were strings attached. The US would pardon billions in Sudan debt in exchange for that Israeli outreach.

ARTS/CULTURE/HISTORY
MEDIA: The NY Times essay “The Original Black Media King” about NY media baron Byron Lewis, 89, founder of the Uniworld Group, a thriving Black advertising company. Piece follows Lewis’s career odyssey from the NY Times, to publisher of The Urbanite Magazine and to the launch of Uniworld in the 6os. White resistance to Black media changed in the 60s, the decade of the Civil Rights Act and the Voting Rights Act, transformative laws in American social dynamics. Uniworld clients included ATT, Burger King, Ford Motor Co. and Quaker Oats. The Lewis story of struggle and success is mere titillation, makes the reader want more. Perhaps, one of the major book publishers will read the piece and make the Lewis memoir a reality.
Kudos to Harlem World Magazine for its exhaustive coverage of the life and times of Colin Powell four star general/ statesman, and first African American National Security Adviser, Chair of Joint Chiefs of Staff, and US Secretary of State. Read the Colin Powell memoir, “My American Journey,” a candid look at America’s post WWII foreign affairs interface with the world.

A Harlem-based media strategy consultant, Victoria is reachable at victoria.horsford@gmail.com