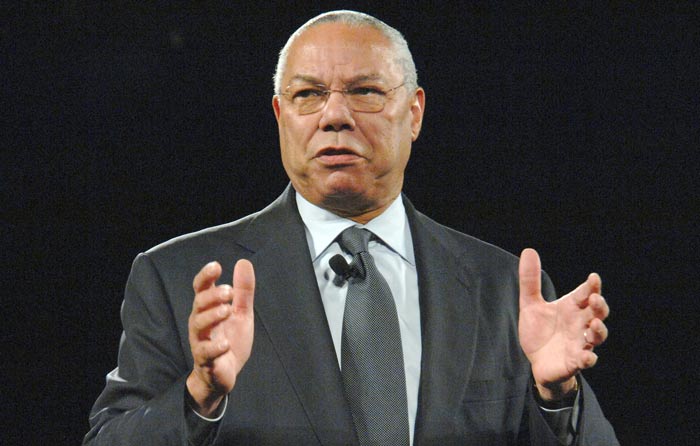 COLIN POWELL
A REMEMBRAANCE
RIP: Beloved General/Statesman Colin Powell, 84, died of complications of COVID-19 on October 18. The son of Jamaican immigrants, Powell was born in Harlem, NY and raised in the South Bronx. He attended and graduated from City College where he joined ROTC. He joined the Army as a Second Lieutenant. Before being deployed to Vietnam where he served two decorated tours of duty. His Army career runs the gamut from the Carter Administration to the Clinton Administration. Powell was national security advisor to Reagan; Chair, Chiefs of Staff to President George H.W.

The architect of a few US military campaigns, Powell was responsible for the removal of Noriega in Panama in 1989 and the ouster of Iraqi strongman Saddam Hussein in Kuwait aka Desert Storm, in 1991. The Powell Doctrine – 1) identify clear political objective 2) gain public support 3) use decisive overwhelming force to defeat the enemy- emerged and was the cornerstone of US military engagement, well sorta/kinda. His military record is marred by his association with the My Lai civilian massacre in Vietnam in 1968. Powell retired from the US Army as a four star general in 1993. By 1995, the retired popular African American general, likened to Eisenhower, was being encouraged to run for president. He was not a war hawk.
His service to America would not end with his retirement. In 2000, President George W. Bush named Powell Secretary of State. He considered himself a problem solver. He was practical and direct which won him lots of kudos with American allies overseas, who were distrustful of the Bush team. A Charlie Rose PBS show included a talk with NY Times bureau chiefs in the United Kingdom, France, and Germany trying to assess the George Bush Presidency in Europe. The feedback was mixed. Rose inquired about the Euro perception of Colin Powell. To a man, they answered. “When Powell talks, Europe listens because he is candid, honest and has moral authority, something not lost on the Bush team, who duped him into a UN speech to justify an Iraqi invasion. It was a Powell faux pas, something he regretted. Trailblazer American soldier and statesman, Powell was a mentor to the next generation of Black military members and others. US Department of Defense Secretary Lloyd Austin said that Powell was always accessible to him.

Career, honor and country notwithstanding, Powell was a good family man who always accepted his wife Alma’s counsel. He never forgot his Jamaican roots, loving rice and peas, curried goat and the mellifluous calypso songs, which routinely blared in his federal offices. He enjoyed the nuanced messages embedded in calypsos like “The Big Bamboo” and “Water De Garden.”

AUTUMN IN AMERICA
US/Haiti: The US deported about 5,000 Haitians migrants recently, sending them to a lawless state, where the streets are run by random gang violence. In July, Haiti President Moise was assassinated. An earthquake hits Haiti in August, killing more than 1,600. Transport of international supplies to earthquake ravaged areas has been obstructed by gangs, the de facto governors of Haiti. The interim government is powerless, recently announced that elections have been canceled indefinitely. The US and the UN were reluctant to intervene until recently.
Last weekend, a Haitian gang kidnapped 17 American missionaries and a Canadian, who disappeared without a trace. On October 18, the FBI and other US officials arrive in Haiti to intervene and to rescue the kidnapped Americans. According to 10/19 media reports, the abductors stated their demand, a $17 million ransom. The situation is precarious. Americans overseas are usually safer than they are at home. No one wants to arouse the ire of the USA. Will the Americans be rescued? Will the USA stop deporting Haitian migrants to Haiti, after the world has witnessed what life is like on Haitian streets during this state of lawlessness?

BUSINESS MATTERS
The Oct/Nov Fortune Magazine issue includes its 2021 List of the 50 Most Powerful Women (MPW) in Corporate America. The seven Black women, who made the MPW cut are Rosalind Brewer, CEO, Walgreens Boots Alliance, #6; Thasunda Brown Duckett,TIAA, a financial giant with $1.3 trillion in assets under management, #10; Alicia Boler Davis, SVP Global Customer Fulfillment, Amazon #17; Ann-Marie Campbell, EVP of US Stores and International Operations, Home Depot, #19; Lisa Jackson VP, Environment, Policy and Social Initiative, Apple, #33; Mellody Hobson, Co-CEO/President Ariel Investments, a Black-owned company and Co-founder of Project Black, an initiative which invests in Black and Latinx-owned companies, # 40; and Barbara Whye, VP of Inclusion and Diversity, Apple #42. Aiche Evans, CEO Zoox, is the first Black woman to head a self-driving car company, a startup which she sold to Amazon last year and unveiled an electric robotaxi, made Fortune’s List of “Ones To Watch.”

Tanzania-born novelist, college professor Abdulrazak Gurnah is the 2021 Nobel Laureate for Literature. He is the second African literature laureate and one of four Blacks, Soyinka, Morrison and Walcott to grab the award. Gurnah, a refugee from his native Tanzania, has called Britain home since the 60s. His works typify “his uncompromising penetration of the effects of colonialism and the fate of refugees in the gulf between cultures and continents.” Voracious readers may be interested in his novels. “Memory of Departure,” “Pilgrims Way,” “Paradise,” and “Desertion.”

BOOKS/ESSAYS: NY Times reporter Andrea Elliott, wrote a 5-part series about an African-American teen named Dasani, a tough, defiant, intelligent girl tasked with helping her mom and stepfather weather drug addiction, co-parenting her blended family of siblings, and a lifelong resident of Brooklyn shelters in 2013. She was tough, intelligent and indefatigable. The NYT series ends with Dasani’s family relocation to a Harlem apartment. In 2014, Dasani appears as BFF at the inauguration of Public Advocate Letitia James, then disappeared without a trace. A 9/2021 NY Times Magazine essay, “What Happens When Trying to Escape Poverty Means Separation From Your Family at 13,” a bittersweet time got Dasani, who attended the Milton Hershey boarding school in Pennsylvania, which held promise and hope, but did not work out. Today, Dasani, 20, is back in a Brooklyn shelter with some siblings’ and attends LaGuardia Community College. Elliott has followed Dasani since 2013. Her book, Dasani’s memoir, “Invisible Child: Poverty, Survival and Hope In An American City” was just published. Today, more than 22,000 Dasanis reside in NYC.

A Harlem-based management consultant, Victoria can be reached at victoria.horsford@gmail.com