Thinker's Notebook: Whose Streets? Our Streets! How Community-in-Action Looks
Advertisement 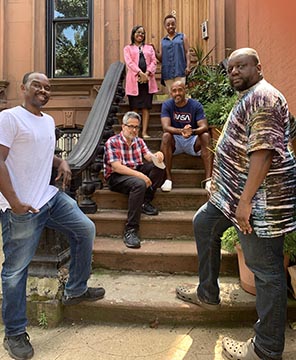 I have called 192 Greene Avenue home for 31 years. I know the neighborhood as intimately as one knows their childhood neighborhood, and yet on July 17th, I saw something I had never seen before. Cars along Greene between Cambridge and Grand were being booted and towed away. There was a new traffic sign sticking out of the ground in front of The Finch. I remember when that storefront belonged to April Walker in the 80’s, and then after that it was a barbershop in the 90’s, and at no time between then and now did that traffic sign exist on that block. The new sign read, “No Parking Monday through Friday 7am-7pm.”

Sharon Holiday and her family own the home next to The Finch. On the morning of July 17th, Sharon’s son saw city workers stabbing that sign into the ground like Armstrong on the moon landing. When he asked the workers, what was with the sign, they gave him the “this is above my pay grade” spiel. By mid-afternoon, the cars that were parked along that block, cars that had been parked there before the sign had been secured in the ground, were being booted. To remove a boot costs $185.

A similar sign was placed on Greene between St. James and Washington. Here’s the thing. Greene Avenue from Grand Avenue up to Washington Avenue is a residential neighborhood. On the three-block strip between Grand and Washington, there are a total of three businesses, a bodega, a boutique bar and The Finch, which is a small restaurant, all grouped one next to the other starting at the corner of Grand Avenue. The type of “No Parking” sign newly sprouted from the ground on Greene Avenue is normally used to secure a loading zone for commercial vehicles. And while there are indeed three small businesses on the same block as the first “No Parking” sign, there are no businesses on the same block as the second sign. Not one. So, why would the DOT put these commercial loading signs on a strip with almost no need at all for a loading zone?

Sharon is a community person. She’s a business owner in Bed-Stuy, and a homeowner. She knows the ropes and wasn’t afraid to seek out the right person to bring into the conversation. Sharon contacted Bernice Green, Associate Publisher of Our Time Press. Bernice pointed Sharon in the direction of Stephen Witt, Editor-in-Chief of Kings County Politics. Six days later, Kings County Politics covered the story. Come to find out, these signs were part of a pilot program implemented by the DOT. The problem is that the DOT only informed Community Board 2 of the program on July 10th, a week before the first car was ticketed, far shorter a time than what should be a standard period of notification. So, at first, no one on our block knew anything about this program before Sharon. But Sharon was enough. Sharon told Bernice, and she told Stephen and she even told Ferdinand Morton, who lives across the street. Ferdinand walked the neighborhood and counted a total of 22 parking spots that were taken as part of this “program.” Within a matter of days, former District Leader Renee Collymore was in the neighborhood taping flyers to poles and knocking on doors to inform residents of the program. On August 1st, Ms. Collymore led a rally to protest the signs. At this point, everyone in the neighborhood knew about the signs, many of them learning the hard way through getting a boot, or even worse, being towed. It was the work of Sharon and Renee that informed the community about this. As Renee puts it, “The process of informing the community was a grassroots activity. I made my flyers, I posted them in the neighborhood and knocked on doors in Clinton Hill in order to make them know what was happening. Many didn’t know, many were unaware. We wanted to make sure that awareness was the main factor. After we got awareness, we wanted to make sure that the community knew that we needed their participation.”

Sharon echoes Renee’s civic ideals: “It’s very important as a community that we are informed about policy. We are stakeholders in this community. This is our home. So, I think that if DOT wanted to implement a program like this, the proper way to do it would have been to at the very least notify the community about the program before you start booting and towing cars. Everyone should be able to contribute to the policy and rules of the neighborhood–local agencies and community stakeholders alike.”

Coretta Scott King said that the greatness of a community is measured by the compassionate actions of its members. Women like Sharon, and Renee, and Bernice, and guys like Stephen and Ferdinand prove that there is strength in speaking up. Those traffic signs were removed on August 14th. And I guarantee you that they won’t return to our block anytime soon.