The Thinker's Notebook: The Funniest Things are usually true.
Advertisement 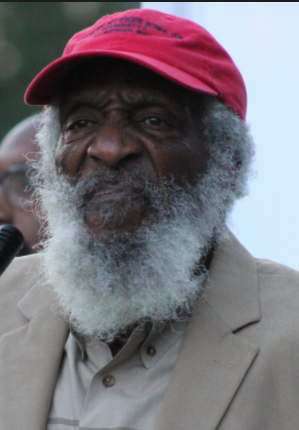 I kinda met Dick Gregory once. It was the spring of 2007. I was walking along Central Park West towards the Columbus Circle train station, and there at the corner of 61st Street and CPW was an elder Black man walking north towards me. He was with two women, one of them was an older Black woman who had her arms full of files and papers, and the other seemed to be a Latina woman and she was saying something to the other woman as I passed. I didn’t recognize that it was him at first. He was smaller than I thought, surely a combination of television and expectations created a much bigger man in my mind. He had a red cap on with a striped polo-styled shirt and a beige spring jacket. As soon as I realized it was him, I just had to say something. So I walked at an angle where I would be close to him as we passed one another. He looked up just as I was about to speak. With pride and confidence I said, “Good afternoon Mr. Gregory. So good to see you”. His facial expression didn’t change, but he looked squarely at me and replied, “Good evening brother”. That was it. I kept going, descending into the train station and smiling at having met Dick Gregory. It wasn’t until I was on the train and replaying the interaction mentally that I realized that he had corrected me without me even knowing. It was after 6pm and I had said good afternoon. But it wasn’t the afternoon anymore. It was now the evening.

I never knew Dick Gregory as a comedian. I never knew that he was the first African-American comedian to play in all-white clubs in the late 50’s and early 60’s. I never knew that he was the first African-American comedian to sit and have an on-air conversation with Jack Paar after performing on the show, or that he attributed the launch of his comedic career to Playboy icon Hugh Hefner. The first time I ever saw the name Dick Gregory was on my 6th-grade teacher Ms. McMillan’s desk. On that desk, amongst the papers and chalk erasers, Ms. McMillan used to keep this gold canister. The canister read Dick Gregory’s Slim-Safe Bahamian Diet Nutritional Drink Mix. His name was written in red cursive print across the canister. I remember it well because I used to wonder if that drink mix tasted anything like Nestle’s Quik. You see, as a kid, I loved chocolate milk, and I spent many days wondering if this Dick Gregory’s drink mix my teacher had on her desk tasted better than Nestle’s Quik.

It wasn’t until my young adult years that I would come to discover the genius and strength of Dick Gregory. I remember watching an Ed Bradley interview on “60 Minutes” where they discussed Mr. Gregory having fasted for two years to protest the Vietnam War. He spoke about getting letters from kids who were hoping that the war would end so that he could eat. Every time I heard the man talk, he’d say something that would educate me. I learned about the amount of water I should drink daily from Dick Gregory. I learned about the importance of entrepreneurship from Dick Gregory. From Dick Gregory, I learned that there is levity in truth, that a thing could be both true and funny. While other civil rights leaders of my generation and the generation before me were stoic, or intense, or aloof, Dick Gregory’s biggest strength was that he was always unapologetically himself. And I took to that. I still do.

The gift of living and growing is that your elders have the knowledge and wisdom to guide and direct you in times of need. Your mother teaches you how to dress yourself. Your father teaches you how to shake a man’s hand. And eventually, through their teaching, you become a better person. The difficult part of living and growing is that one day your elders become your ancestors, and it’s then that you understand how necessary they were in your life. I only met Dick Gregory one time, but his lessons and education helped me to become a better person. Thank you for loving our culture enough to make the conscious choice to impart wisdom onto people you never even knew. I will look for you in the whirlwind. And when I greet you again, I promise to have my time of day correct.